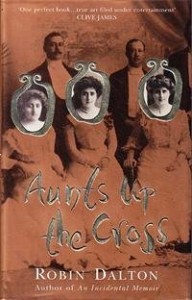 What a strange start we had to Spring in my neck of the woods, with nearly three times our average rainfall. I think it’s been like that around other parts of Australia too? Even stranger though was this section’s review situation. We had half the number of reviews. Were we all bailing out our homes?

Still, we did have 17 reviews, which included several new books being added to our increasingly useful database. Here are some highlights.

No reviews linked to the challenge this month were tagged as Classics, but one book from Text Classics was posted, so I’m going to discuss it here.The book, Robin Dalton’s memoir Aunts up the Cross, was first published in 1965 and reviewer Kim Forrester (Reading Matters) quite rightly tagged it in our History, Memoir, Biography category. But non-fiction books can be classic too, I’d argue. Anyhow, the person who wrote the introduction to the Text Classics edition is a classic himself, Clive James. Kim enjoyed the introduction which said “is worth the cover price alone”.

Dalton’s memoir, says Kim, is “often outrageously funny — and always delightful”. The Cross of the title is, as you’ve probably realised, Sydney’s Kings Cross, which was both a red-light district and the home of many of Sydney’s bohemians. Dalton grew up in a house here in the 1920s and 30s with her parents, grandparents, and, writes Kim, “a succession of eccentric aunts, uncles and house guests”. Kim describes it as:

a really lovely, happy, feel-good read, helped in part by the cast of peculiar characters in it (including Dalton herself, who is precocious and self-deprecating throughout), but largely by the gorgeously vivid prose style, which is littered with stop-you-in-your-tracks sentences about outrageous things Dalton’s relatives have done. It’s the marriage between farce and tragedy, nostalgia and social commentary that make it such a delightful — and insightful — read.

I know I’ve written a lot about this book but that’s because it not only sounds like a great read, but Dalton herself is of particular interest. She was a leading literary agent in the UK in the 1960s, and her clients included, says Kim, Iris Murdoch, Edna O’Brien, Margaret Drabble and Tennessee Williams. I mean to say … this is one interesting woman.

It’s a while since I’ve featured a publisher here, but I rather like knowing something about those who publish the books we read. Mostly, though, I focus my interest on independent Aussie publishers. Simon and Schuster Australia is not one of these! Its parent company was established in New York in 1924, and is part of the CBS Corporation. According to Wikipedia the company started by publishing books of crossword puzzles, which makes it interesting to me.

The Australian division publishes fiction across a wide variety of genres, as well as non-fiction and children’s books. It also, I was interested to read on its brief corporate information page, works as a sales and distribution partner for smaller companies such as the lovely Affirm Press and the newly rebranded Ventura Press. S&S’s website has a page for the Australian titles they publish, which includes books by authors we love here at the Challenge, like Anita Heiss. But in this post, I’ll focus on those reviewed this month for AWW, Melissa Ashley’s The bird man’s wife and Amanda Ortlepp’s Claiming Noah.

The birdman’s wife is, says Emily (of A Keyboard and an Open Mind), an historical novel about the wife of illustrator Elizabeth Gould and “the natural history craze sweeping Europe in the mid-nineteenth century.” She found the book interesting, particularly the

enjoyable side characters, such as the Gould children and extended family, Lady Franklin in Tasmania, and fellow illustrator Edward Lear (I had to google him to check it was the same Edward Lear who wrote the Owl and the Pussy Cat, and what do you know, it was! He was also a scientific illustrator).

However, she did find that, being based on a person’s life, it didn’t have the sort of plot “with interesting twists and turns” that she prefers to read. Carolyn and Brenda, both reviewing at GoodReads, felt similarly. They thought the book would be enjoyed by those interested in birds, taxidermy and the art of illustration, but its slow pace and detailed descriptions meant that it worked less, for them, as a novel. I must say I’m intrigued by the subject matter, as was Jennifer Cameron-Smith who reviewed it last month. Her assessment that “part of the magic of this novel is the way the story unfolds” tells us that she is this book’s reader.

The other Simon and Schuster book reviewed this month was Amanda Ortlepp’s first novel, Claiming Noah. It was reviewed by Josie Forshaw at GoodReads. She writes that the book sat around for a while unread but that her:

lack of contribution to the Australian Women Writers challenge this year pushed me into getting it read and with that brought the great joy of knowing you have found a new great author to follow.

Haha, I loved that she was inspired by her responsibility to the Challenge to read the book, and am relieved that she found it was worth it! She concludes her brief review by describing it as “a really great read that drew me right in and spat me out again several times!”  I haven’t read Ortlepp yet. Have you?

Ventura Press’s Rebellious daughters, distributed by Simon and Schuster, is discussed below.

Two books reviewed this month features writers talking about themselves, and both are waiting patiently on my TBR. In Rebellious daughters, edited by Maria Katsonis and Lee Kofman, 17 Australian women writers, like Marion Halligan and Jane Caro, share their stories of rebellion, of their fight for independence against parental expectations. Shelley McInnes reviewing it for The Newtown Review of Books shares some of the writers’ stories contained in it, and agreed that the editors have achieved their goal of writing “a risky book, one … minus clichés, stereotypes, and happy endings” but she also suggests that “in this book all of the messiness and cruelty of life is on display, without the consolations of understanding that can come from reading a book of greater revelatory and explanatory power.”

The other book is Charlotte Wood’s The writer’s room: Conversations about writing, which draws from the interviews she conducted on her online journal of the same name. It was also reviewed in The Newtown Review of Books, this time by Kylie Mason. The authors included in this one are both male and female, but for our purposes I’ll just list the women: Tegan Bennett Daylight, Margo Lanagan, Amanda Lohrey, Joan London, and Emily Perkins. Mason enjoyed the book, writing:

The respect and affection with which the interviews are conducted, and the willingness of the writers to open up and offer insight into their writing lives, has resulted in the kind of accessible, honest and enlightening conversations about writing that have been absent from the Australian literary scene for quite a length of time.

I look forward very much to reading both books.