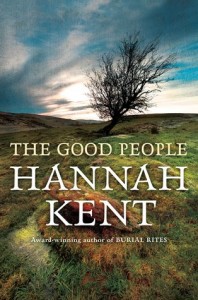 Hello everyone! We’ve got very similar numbers to last month’s roundup and a varied selection of books. There were 19 reviews of 17 books by 16 authors. The book with three reviews this month is The Birdman’s Wife by Melissa Ashley that I highlighted last month. The author with two books reviewed is Barbara Hannay with The Grazier’s Wife and The Secret Years. Both books have been highlighted before and can be found by searching our site. And, drumroll please, Brenda is our top reviewer this month with six reviews.

In September’s roundup we will be spending quite a bit of time in the early to mid 1800s kicking off with the second novel of Hannah Kent’s The Good People. “Set in Ireland in 1825, in a small rural community full of Gaelic superstitions and folklore, the novel is essentially about the lives of Nance (an elderly healing woman) and the recently widowed Nora.” Tracey from Carpe Librum was a tad disappointed. “The Good People is just as descriptive and emotive as her award winning debut, I just didn’t find the actual story as engaging or all-encompassing.”

Back to Australia we have Wild Island by Jennifer Livett. “My name is Harriet Adair, and forty years ago on that ship I was Jane Eyre’s companion. That voyage also brought me friendship with another intrepid Jane: Lady Franklin.” Jennifer from Goodreads concludes, “If you enjoy historical fiction set in colonial Tasmania, I recommend this novel. The Jane Eyre connection mostly worked for me although it wasn’t central to my enjoyment of the novel.”

Also set in Van Dieman’s Land is Tiger Men by Judy Nunn which Jennifer from Goodreads has also reviewed. “Starting in Van Diemen’s Land in 1853 (known as Tasmania since 1856), this novel spans three generations of men. And in the time that they and their families established themselves, the Tasmanian Tiger was hunted to extinction.” Jennifer observes, “This is the kind of novel that always has me reaching for history books, to learn more about the island on which I spent the first (almost) 18 years of my life.

Back a few years and set in Jane Austen’s England, we have Longbourn Revisited by Margaret Lynette Sharp. “When news of Mr Bennet’s illness arrives at Pemberley, Elizabeth finds that she must set off for Longbourn without the company of her husband, Fitzwilliam Darcy, who has business in London requiring his urgent attention. What unexpected events will further disrupt the apparent harmony of Elizabeth’s life?” Brenda from Goodreads writes, “Longbourn Revisited by Aussie author Margaret Lynette Sharp is a short, sweet romance and was published as fan fiction.” Brenda also writes, “I did feel that the ending was rather abrupt, but that said it was an entertaining although brief read.”

Moving into the 20th Century we have Jewel Sea by Kim Kelly. “March, 1912. A sultry Indian summer hangs over the west coast of Australia and aboard the luxury steamship SS Koombana, three tales entwine.” Brenda from Goodreads is enthusiastic. “A story filled with mystery and intrigue; a little magic and a well-written narrative – Kim Kelly’s latest book is enchanting, intense and dazzling! A definite keeper!”

As a writer currently researching the 1920s and a fan of Kristel Thornell’s first novel Night Street I was very quick to mark this one as TBR on goodreads, number 999 actually! “What really did happen to Agatha Christie during her mysterious eleven-day disappearance just as she was on the cusp of fame? An entrancing novel of creativity and grief.” Our very busy reviewer Brenda from Goodreads writes, “On the Blue Train by Aussie author Kristel Thornell was a wonderful historical fiction novel woven around the real-life disappearance of Agatha Christie back in 1926. A story of what might have happened, blended with what did happen – On the Blue Train is sad, and definitely uplifting!”

Wrapping up this month we have Treading Air by Ariella Van Luyn. “In 1920s Brisbane, Lizzie O’Dea wants to get away from her dad and the memories of her mum that haunt her. At the races, she meets attractive, war-scarred Joe. When he says that he wants to marry her and take her away to far-flung Townsville, Lizzie sees her chance to escape.” Sue from Whispering Gums observes, “This is not a sentimental story, but it nonetheless reminds us that not everyone gets a lucky start in life. There are Lizzies still amongst us today. This is the sort of historical fiction I enjoy.”

Well, it’s spring in Australia and I’m hoping the coming summer won’t distract too many of our loyal reviewers. But then there is such a thing as a beach read! Looking forward to catching up with all of you again soon.