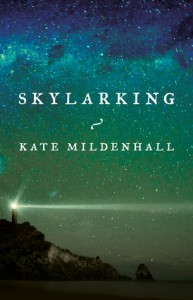 Considering the weather is warming up and the silly season is fast approaching, I’m very surprised by the amount of reviews this month – 22 reviews of 17 books by 16 authors. The author with two books reviewed is Anna Romer – 1 review for Thornwood House and four reviews for Beyond the Orchard both of which I will come to shortly.

Good People by Hannah Kent, highlighted last month, garnered three reviews this month, Julia Tulloh, Kate at booksaremyfavouriteandbest and Emily Paull. As I’m in a contrary mood and have begun to run around like a crazy person (in shock that Christmas is only a month away), I’m going to jump around chronologically too, starting selfishly with the book that I have just marked as to be read:

In Skylarking by Kate Mildenhall “Kate and Harriet are best friends, growing up together on an isolated Australian cape in the 1880s. As daughters of the lighthouse keepers, the two girls share everything, until a fisherman, McPhail, arrives in their small community.” Caroline at Goodreads observes,“This is a gently told story. It focused mostly on the details of daily life in a small community and the freedom the girls enjoyed as they were growing up but also the need for them to leave one day if they wanted to marry and have families.”

Jumping right back to the 17th century is Playing With Fire by Sharon Robards. “Set in 17th Century Germany, this historical fiction is based on the real life of Duchess Sophia of Hanover, heiress to the English throne, whose son George went on to become George I.” Carolyn at Goodreads concludes, “Sharon Robards does done a great job of bringing this period to life and re-imagining the courts of Sophia and Elanore. 3.5 stars.”

A very different subject matter is Black British by Hebe De Souza. “In the turbulent years that follow the British Empire’s collapse in India, rebellious and inquisitive Lucy de Souza is born into an affluent Indian family that once prospered under the Raj.” Carol at Reading, Writing and Riesling writes, “A thoughtful look at history, colonialism, migration and displacement with a feminist bent, this story is succinct yet powerful.”

Set during the 1940s is Worth Fighting For by Mary-Anne O’Connor. “From Darwin to Pearl Harbour, Sydney to Papua New Guinea, a compelling story of courage, honour and a great love set against the epic backdrop of the Second World War.” Brenda at Goodreads concludes, “Filled with courage in all forms, loyalty and determination, I thoroughly enjoyed this historical fiction novel set to the horrors of the Second World War. Highly recommended.”

Back to WWI and we have The Chocolate Tin by the prolific writer Fiona McIntosh. “Alexandra Frobisher is a modern-thinking woman with hopes of a career in England’s famous chocolate-making town of York. She has received several proposals of marriage, although none of them promises that elusive extra – love.” Brenda at Goodreads writes, “The Chocolate Tin by Aussie author Fiona McIntosh is an emotional and haunting narrative which had me reaching for tissues a few times.”

As mentioned earlier Beyond the Orchard by Anna Romer received four reviews this month. “Lucy Briar has arrived home in turmoil after years overseas. She’s met her fiancé in London and has her life mapped out, but something is holding her back.” Lauren at The Australian Bookshelf writes, “Her novels are character driven, time often moves between the past and present, and there’s intrigue, mystery and suspense.” Carol at Reading, Writing and Riesling observes, “Romer agilely jumps between 1930’s to the 1990’s with ease – the two histories slowly collide.”

However, Tracey at Carpe Librum struggled with all the different time periods and character perspectives. “The strongest part of the novel by far was the story of Orah, and I would have preferred to read her story over that of Lucy unravelling her family history at Bitterwood any day.” Brenda at Goodreads found it “another atmospheric and emotional read by Aussie author Anna Romer.” For a review of her previous novel Thornwood House see Brenda’s review at Goodreads.

And now to make you even dizzier we will jump back to the concluding book in the Dark Rider Series by Anne Gracie, Bride by Mistake. I’m guessing that five books set around the same time, obviously by the same author and with the same writing style would be very soothing to read in the silly season. “Eight years ago, Lieutenant Luke Ripton made a hasty wartime marriage to protect a young girl from a forced union and then left her protected in a remote mountain convent. Now, Luke is Lord Ripton, but he has been unable to obtain an annulment,..” Eleni at Goodreads writes, “An amazing way to end the series. Finally Luke meets his match in Isabella. This fiery Spaniard is exactly what this Lord needs – passionate, caring and oh-so-headstrong.”

So, have you begun lining up your Christmas holiday reads yet? I hope this selection above gives you a few ideas.