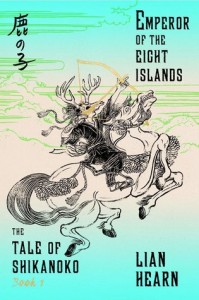 Hello again, dear readers. The past couple of months have not been especially prolific on the AWW reviewing front, but some reading and reviewing got done, so let me tell you about the books that caught our readers these past two months.

Lian Hearn was the most popular author reviewed, with Carolyn reading the first book in the feudal Japanese fantasy series, Tale of Shikanoko: The Emperor of the Eight Islands. To make things neat, Jennifer Cameron-Smith made her way through books 2 to 4 of the same series: Autumn Princess, Dragon Child, Lord of the Darkwood, and The Tengu’s Game of Go. Jennifer enjoyed the series so much that she plans to re-read it soon.

Juliet Marillier was the second most popular author with her latest book, Den of Wolves, the conclusion to the Blackthorn and Grim trilogy, garnering three reviews. Tien @Tien’s Blurb also included an interview with the author in the same post as her review, worth checking out if you’re interested. Elizabeth Fitzgerald also enjoyed the conclusion to the trilogy, saying, “It didn’t let me down, though it also didn’t go quite where I expected.” Keri Arthur received a couple of reviews for books from different series. Eleni Konstantine reviewed Darkness Rising, the second book in Dark Angels series, which is set in the Riley Jensen universe and which she enjoyed. Elizabeth Fitzgerald reviewed Flameout, the third in the Souls of Fire series, which unfortunately she didn’t enjoy as much as she hoped.

Another series which got a bit of attention these past two months was Sharon M Johnston’s Open Heart books, which Cassandra Page has been making her way through. She enjoyed the first book, Divided, enough to re-read it before moving onto the second book, Shattered. She concludes her second review with the following suggestion:

if you want a fast-paced Aussie urban fantasy/sci-fi with kissing and a supernatural mystery, why not give the Open Heart series a try? The Troubles Keeper by Susan May also picked up a couple of reviews from Brenda and Tracey Carpe Librum. Both note that it’s a mix of genres — thriller, crime, paranormal, horror, mystery — and enjoyed it, but didn’t love it.
And then there were quite a few authors that got one review each: