November Round Up – History, Memoir & Biography 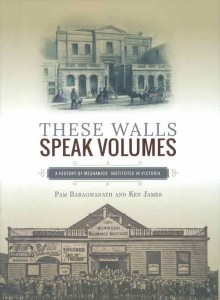 In the news this month for history, memoir & biography (HMB) was the announcement of the Victorian Premier’s shortlist. Four women writers featured in the non-fiction shortlist. Hopefully we will have some AWW reviews of Offshore and Position Doubtful soon. In the meantime the AWW links for the other two are included below.

The winners of the Victorian Community History Awards were also recently awarded. A self published book called These Walls Speak Volumes: A History of Mechanics’ Institutes in Victoria by Pam Baragwanath and Ken James was the overall prize winner. Magda Szubanski received the Judges Special Prize for Reckoning, The History Publication Award was given to Rozzi Bazzani for her book Hector: The Story of Hector Crawford and Crawford Productions. Judith Buckrich won the Local History Small Publication Award for The Village of Ripponlea and the Cultural Diversity Award went to Wadaddi Nabadda. Paths to Peace. Voices of the Somali Speaking Community by Anne Doyle. Finally the Collaborative Community Award went to Breaking Out: Memories of Melbourne in the 1970s edited by Susan Blackburn. It’s great to see local history and regional stories being recognised and supported by groups like this.

Historians featured well in this month’s reviews for HMB.

Although The Art of Time Travel is written by a male author, Tom Griffiths, it features chapters on five female Australian historians – Eleanor Dark, Judith Wright, Donna Merwick, Inga Clendinnen and Grace Karskens and for that reason I think it’s worth considering for the AWW reading challenge. Reviewed by Michelle @Adventures in Biography it has led to an interesting discussion about our favourite historians. In a lovely piece of synchronicity, Jeanette @Newtown Review of Books shared her thoughts on Georgina Arnott’s biography, The Unknown Judith Wright. A book that aims to reveal the younger Wright with the purpose of charting her literary growth and development.

Wright had resisted any investigation of her youthful endeavours: ‘she preferred that early poetry was not discussed’. In this meticulous and respectful study, Arnott fills this gap, careful not to criticise earlier biographers, nor to accuse Wright of wilfully manipulating her life story. Using an extensive range of primary sources, Arnott traces Wright’s styles and themes through materials such as scrapbooks of juvenilia, and her columns in the University of Sydney student magazine Honi Soit.

Another meticulous and respectful study was produced by Brenda Niall in her biography Mannix.

Reviewed by two of our challenge participants this month – Yvonne @Newtown Review of Books wrote that, A weakness of popular Australian history is how the lives of the millions of immigrants we have received over the centuries are truncated. Their early lives in their countries of origin are too often dismissed in a few paltry paragraphs. It is almost as if the act of arriving in Australia makes the immigrant a tabula rasa, his or her life only starting when setting foot on Australian soil. Biography provides the corrective by looking at the whole life of the subject, but the biographer’s task for someone like Mannix is more difficult, as it’s necessary to explore the archives and the cultures of two countries, not one.

Nancy @Ipsofactodotme, writing from The Netherlands, was surprised by how much she learnt about Irish politics whilst reading an Australian biography, which would indicate that Niall was indeed successful in providing a complete picture of Mannix’ life prior to his immigration to our shores.

It’s always lovely to see some older HMB publications being reviewed as well.

Heddy and me… illuminates the personal and familial costs of the Holocaust, but also provides an historical perspective on that mysterious thing we call human behaviour. This book deserves a continued life.

Jennifer reminded us of Elizabeth Hodgson’s powerful and moving 2008 verse novel/poetry memoir Skin Painting. She summed up her experience by saying “This is a book I need to keep. To revisit and reread. I’ve read all of the words, but not yet absorbed all of the meaning.”

Finally, Carolyn took us back to 2012 with her review of Abandoned Women: Scottish Convicts Exiled Beyond the Seas by Lucy Frost.

Where has your HMB reading taken you this month?