Interview with Katherine Johnson, author of The Better Son 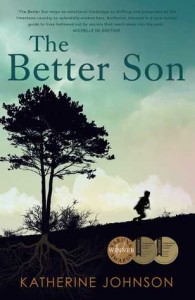 This is the first in an occasional series of in-depth author interviews. Today we have guest author Christy Collins interviewing Katherine Johnson, whose second novel, The Better Son, was released to great acclaim last year. Q. Firstly, congratulations on The Better Son. I read it in a single day. It sets a cracking pace and covers a very large canvas in terms of time. Was this long time span always your intention or did this develop as you wrote?

A. Thanks, Christy. Pacing was something I worked and reworked for this book. I always planned to cover this long time span, but changed the way I dealt with it during the drafting process. Initially, it alternated between the ‘present’ day (2002) and 1950s Tasmania, but this structure slowed the pacing of the book, and didn’t give the reader enough of a sense of why the main character, Kip, was like he was as an adult. I found that a modern-day preface was enough to signal that the book would have a long time span, and to signal that the past had a large impact on the present, then I went straight back to when Kip and his brother Tommy were children, and to the events that so impacted the rest of Kip’s life. By keeping Part 1 in the 1950s, the reader can experience the events as they happen, rather than as flashback or memories. Part 2 begins with Kip as an adult, going back to the cave country of his childhood to make peace with his past. He has his own journey through the cave as an adult that needs to proceed relatively uninterrupted, to keep the pace moving along.

Q. Did you start with the young Kip or the adult Kip, or was there another character who got things started?

A. The adult Kip came to me first, but in the context of remembering, almost reliving, his childhood and the events that so coloured the rest of his life. This then gave way to a more chronological telling – as the events happened rather than through flashbacks.

The novel always started with the adult Kip (in the final version, just as a preface), as it is largely a book about the impacts of childhood on our adult lives. I wanted to show that some events can have ramifications that are still felt 50 years later.

Q. As I was reading I was reminded of a number of other books. One was Cate Kennedy’s The World Beneath. I was also reminded of the deep satisfaction that the childhood fantasy of finding a secret cave or other secret place brings especially as a young reader and in this respect I was thinking of two favourites from when I was young: a Secret Seven book in which ‘the seven’ find a robbers cave hidden by vines, and Bridge to Terabithia. And finally, Virginia Woolf’s To the Lighthouse which has a similar structure in that it deals with two episodes separated in time, joined by a rapid skim over the intervening period. Where any of these in your mind while you were writing?

A. I agree, Cate Kennedy’s The World Beneath does have some parallels – a Tasmanian setting, a dangerous journey, family and a title that, if she hadn’t used it, would have been incredibly fitting! Regarding the secret places children uncover, I wasn’t directly influenced by the books you mentioned, but I was influenced by the commonality of children searching out hiding places, or making them for themselves. In fact, the book’s original intro was about precisely this. It read:

All children find or invent other worlds in which to lose themselves — a house in a tree, a corner of forest, a blanket thrown over chairs in a living room, the imagined places of daydreams and nightmares.

Our need, Tommy’s and mine, was no different. But our secret place was a world apart from the childish haunts of our playmates.

What at first appeared to be a small gap in rocks, only an hour’s climb uphill through scratchy scrub from our dairy farm, opened into a world of such terrifying proportions, of such audacious beauty, that it seemed incomprehensible, even then, that no one else knew of its existence.

These paragraphs still appear in the book, later and altered.

Q. At one point Kip thinks: “the biggest things go unsaid and people spend their lives blathering about nothing at all” (142) – this almost seems to sum up the book with all its secrets and large happenings pressed underground. Was this, saying and not saying of things, something you wanted to explore?

A. Definitely. Secrets and lies are central to the novel; the labyrinthine underworld of dizzying tunnels they metaphorically lead people along, often ending in dead ends or consequences larger than anyone imagined. Also the large things that are left unsaid: primarily, the need for people to hear that they are loved, and the consequences for them if they don’t hear that. The fact that much of what is said is about ‘keeping up appearances’, which, in the end, serves no one. The fact, too, that if the many unspoken truths of the novel had been revealed sooner, the outcome for all concerned would have been very different.

Q. The cave in your novel is incredible and often terrifying. Can you tell me about your (cave-related) research?

A. The caves around Mole Creek (northern Tasmania) are incredible. There are more than 300 under the town and surrounding pasture and hills. I joined a caving club and went caving in the neighbouring cave to Kubla, which was once connected prior to a rock fall. It was an incredible experience, being the only people inside, the incredible quiet, apart from the dripping of water onto limestone, the massive, ancient structures, and the very delicate, ornate crystals. The sense of deep, deep time, that puts all of our individual issues into clear perspective. I write about this in an article that was published last year in the Sydney Morning Herald.

I also went into Marakoopa cave with a ranger after hours to experience another cave in the area. This was the cave that was discovered by two young brothers back in 1906. The boys lived on a farm nearby and kept their discovery secret for some years. This was the image that inspired my novel. Why would two boys keep something like this secret? It was so incredibly dangerous to explore it on their own. What if something had happened to one of them? The Better Son is, however, entirely fictional.

Q. Were you (or your agent or editor) worried about the claustrophobia inevitable when setting much of your story in a cave?

A. This did occur to me and to my then editor, now my agent. It is part of the reason there are diversions in the book to other time periods (flashbacks), and dreams. Ways of coming up for air! Yet it was also important to keep the action moving, so these are kept to a minimum.

Q. The book contains many echoes and refractions of stories so that – without wanting to give away any of the plot – Rex’s story is echoed by Squid’s which is echoed by Sally and Kip’s. There are echoes between Otto’s and Jess’ stories in the second half of the book and between Dan and Harold’s stories. And children – especially boys – seem to be echoes or reflections of their fathers. Are these things you’re thinking about as you write or do they appear more organically as the work comes together?

A. Yes, you’re right. There are many echoes, pairings of stories where there are parallels. And echoes seems an apt term for a story set in a cave. Initially they evolved organically, but it became more conscious as a recurring theme as the drafting unfolded. I think it’s interesting to see how similar scenarios can play out differently between people, or if they play out similarly, how differently people handle them.

Q. Letters and diary entries are important in this story and they allow you to do something interesting things across time and space in the book. I wondered how you were thinking about these artefacts: were they always central to the project or were they later additions?

A. I’m pleased they worked for you. They provide a way of getting to the points of view of the ‘secondary’ characters, who don’t have their points of view explored directly in the novel. ie Jess (Kip’s mother), Ilse (Kip’s wife) and Ruben (Kip’s son). In an early iteration, Ilse had her own chapters, but it was a bit of a distraction and I had advice from my then editor, now my agent, to try to get at her POV in a different way. This was my solution. Interestingly, one critic pulled me up on it, but I feel the diaries/letters etc work as a way of succinctly showing these characters’ viewpoints/emotions/concerns.

Q. Is there anything else you’d like to add?

A. Thanks, Christy, for your feedback. Receiving feedback from readers and writers is one of the best parts of writing.

About Katherine Johnson: Katherine was born in Queensland and grew up alongside the fig-tree lined Brisbane River. At university she combined her two loves ― writing and biology ― graduating with both Arts and Science degrees, with honours in marine biology. Katherine then moved to Tasmania where, after more than a decade working as a science journalist for the CSIRO and other organisations, she began writing fiction: stories of love, loss and resilience set against wild landscapes. Her first novel, Pescador’s Wake is set on the Southern Ocean, in South America and Tasmania. Her second novel, The Better Son, was published by Ventura Press in 2016 and is a Tasmanian Literary Award winner. She is now completing a PhD in creative writing at the University of Tasmania. She lives on a cliff top overlooking the sea with her husband and two children.

About Christy Collins: Christy’s novella The End of Seeing was one of the winners of the Viva La Novella Prize 2015 and is published by Seizure. Her work has been shortlisted for the Writing Australia Unpublished Manuscript Prize, the Colin Roderick Award and the H. T. Priestly Medal and long-listed for the Vogel. Like Katherine, Christy has an Arts/Science degree (in this case with honours in Psychology) and she, too, is currently a PhD candidate in Creative Writing at the University of Tasmania. Christy lives in Melbourne and tutors in Literature and Creative Writing at the Australian Catholic University.