January 2017 Round Up: Romance, Romantic Suspense and Erotica 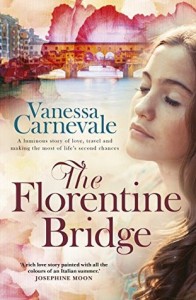 Welcome to the first round up of romance, romantic suspense and erotica for 2017. I’m Elizabeth Fitzgerald and I’m excited to be stepping in as the AWW editor for this genre. The romance category has always had a lot of diversity and this month kept to that trend. Throughout January, we had 45 reviews of 42 books by 31 authors.

One of the more popular books was Vanessa Carnevale’s The Florentine Bridge. Theresa Smith gave it 5 stars, while Monique at Write Note Reviews said:

The Florentine Bridge is one of those keep-a-tissue handy books that pulls at your heartstrings over and over … and over. Vanessa Carnevale ticked all my boxes when she set her debut in Tuscany and had art as the passion for her protagonist, Mia. But then she went and brought in the charming, smouldering Luca and my heart melted.

In the Deep End by Penelope Janu was also very well received. Bree from 1girl2manybooks called it her favourite book of the year so far and enjoyed the story’s grounding in climate change and environmental issues. Lauren Keegan said:

Janu touches on some serious issues that underly the fun, light-hearted banter that occurs between Harry and Per. She has a serious phobia that requires treatment before she can achieve her goal of getting back on a ship to film a documentary. As a psychologist I often get annoyed when these issues are resolved too hastily, but the author ensures Harry faces her fears (and reacts to them) in a realistic manner. I enjoyed seeing Harry’s growth in this aspect of her life, from the avoidant and in denial attitude to the more determined and courageous actions she takes to overcome her fears. January seems like the perfect month for reading Summer Skin by Kirsty Eagar. Tracey R. of Literary Brooding thought highly of the book:

Eagar is able to capture the doubts, fears and the joys of that transition from teenage years into adulthood. Strong messages to both women and men about individuality, independence, sex and respect are conveyed without being preachy.  Eagar certainly knows her target audience, can speak their language and has provided a fresh and unique voice in the young adult romance genre.

Jess at The Neverending Bookshelf did a bit of catching up her festive reading with Santa and the Saddler by Cathryn Hein.

The first thing that struck me about this brilliant festive read was the opening male voice. While it’s not unusual in romances these day to have narratives told from alternating perspectives of the hero and heroine, it’s been a long time since I encountered a book that opened with a bewildered male perspective; and I loved it because of that.

There are a few great releases coming out in February. Keep your eyes out for Shona Husk’s Lady of Silver, a paranormal romance set in Perth. Also forthcoming is Country Roads, a rural romance by Nicole Hurley-Moore. The Melbourne Romance Writers Guild are releasing an anthology called Taste of Romance. For fans of romantic suspense, Combatting Fear by Sandy Vaile might be the book for you.

Have you got any more recommendations? We’d love to hear from you!

Elizabeth Fitzgerald is a freelance editor and owner of Earl Grey Editing. She runs a book blog, is a judge for the Aurealis Award, and just finished her fourth term as the Secretary of the Canberra Speculative Fiction Guild. An unabashed roleplayer and reader of romance, her weaknesses are books, loose-leaf tea and silly dogs. She tweets @elizabeth_fitz