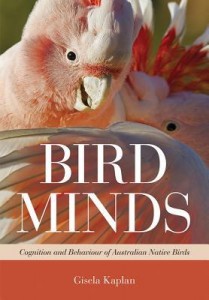 Non-fiction has a strong presence on this year’s Stella Prize longlist, with eight works of non-fiction, three novels and a collection of short stories in contention. In announcing the longlist Brenda Walker, the chair of the Judges Panel, noted the importance of nonfiction writing as a contribution to the national conversation “at a time when women were fighting to be seen and heard politically, and to secure their positions in the public sphere.” For me this opportunity to shape the national conversation, and to see and hear women as experts in their field, is one of the most important aspects of non-fiction writing, and I’m glad the Stella Prize and the Australian Women Writers Challenge are promoting non-fiction writing this year. One such book is Bird Minds: Cognition and Behaviour of Australian Native Birds, by Gisella Kaplan, adjunct professor in the Centre for Neurosciences and Animal Behaviour at UNE. This book won the Whitely Award, conferred by the Royal Zoological Society of NSW in 2016. Prompted by the question “Is there anything special about Australian birds?”, Kaplan’s research found that “Australian birds are not just ‘fair dinkum’ but extremely clever, complex and adaptable’. In her own beautifully illustrated review of this book Nancy at ipsofactodotme (great name for a blog!) enjoyed the book’s “knowledgable, detailed, technical, anecdotal and entertaining tone”, and suggested reading it electronically, so as to appreciate the beautiful images.

Kaplan’s book is a recent one, but Sue at Whispering Gums used the National Library’s Trove to locate older writings about birds. She found the work of Louisa Atkinson, a significant botanist, our first Australian-born woman novelist and the first Australian woman to have a long-running column in a major newspaper. Atkinson’s column ‘A Voice from the Country’ ran between 1860-1870 in the Sydney Morning Herald. Sue reviewed one of her early columns from January 1860 where Atkinson described the plants and birds surrounding her Blue Mountains home during January, and noted both her skill in capturing the landscape but also the unfamiliarity of her language and expressions to present-day readers. Another science-oriented book reviewed recently is Kate Grenville’s The Case Against Fragrance. In her review, Cass Moriarty noted that this book is a departure from the fiction and stories for which Grenville is better known. She describes it as “a scientific, but highly readable and accessible account of why fragrance (or scent or perfume) in products may not be as exotic and wonderful as the advertising may have us believe; why, in fact, fragrance may actually be making us sick”. She notes that

Kate has managed to collate an enormous amount of scientific research and condense it into a book that is easily understandable by those of us without a science degree, as well as being a balanced representation of her findings. Straddling the shifting border between ‘non-fiction’ and ‘history’ categories in the Australian Women Writers Challenge, Jane Jose’s book Places Women Make draws on the stories of over 150 women, spanning from 1788 to the present, who have contributed in some way to the social, cultural and political life of Australia’s capital cities. Although finding the subject matter fascinating, reviewer Rachel Harris found Jose’s interpretation of the topic “overwhelmingly disappointing. Instead of challenging stereotypes of women and place, Jose instead reinscribes them, focusing almost entirely on conventional female historical figures“. She suggests that in catering for a wide audience, Jose has “ seemingly compromised the extent to which she could engage with different practical and theoretical considerations” and the brevity, lack of footnotes and bibliography  “lends itself to a coffee-table read rather than a work that would be of significance to history enthusiasts and scholars.” However, she would “definitely recommend this book to general readers interested in how women have contributed to the spaces they like to visit.” There were two recent reviews of Charlotte Wood’s compilation of interviews with writers in The Writers Room: Conversations about Writing. These interviews, conducted over several years, are a conversation between interviewer and interviewee, where both offer their commentary. It is a book for both writers and readers. Cass Moriarty described it as “a compendium of anecdotes and advice and commentary that any writer should have by their side to dip into at will for inspiration and encouragement” while giving avid readers “an easy to read and interesting insight into the way writers think, write, work, edit and manage their writing lives.” Lisa at Goodreads described it as “fascinating and inspiring, giving insight into each author’s thought and work processes … a great resource – easily one to recommend to readers and writers.”

I am Janine Rizzetti and I blog at the rather immodestly named ‘Resident Judge of Port Phillip’ which combines history and fiction and non-fiction book reviews.  I am a historian, interested in Australian and colonial history, officially retired but more occupied than I thought I would be with my local historical society.  After posting to the Australian Women Writers Challenge since its inception, I was happy to accept the offer to write round-ups, of which this is the first!