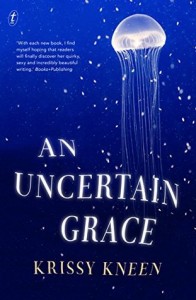 Today’s Q&A is with Krissy Kneen, whose book, An Uncertain Grace, is released tomorrow (27 February 2017). Welcome, Krissy, and thanks for participating in Sunday Spotlight.

What is your favourite scene from your books?
My favourite scene changes from book to book but I am currently fond of the sex scene in An Uncertain Grace between a 120 year old woman and M, a person transitioning from female to a centre place between genders. It was a complicated scene to write because sex is of the body and I had two very unusual bodies indeed. I had to be gentle but passionate, I had to make sure that the scene was believable and also sexy. I am pretty sure there has never been a scene like it in any other book and for this reason I am proud of it. What inspired An Uncertain Grace?
I had been touring two books in one year and didn’t think I had any energy left to write a book. I was doing a lot of flying and bought Nautilus, Scientific American and New Scientist and Cosmos magazines to read on the plane. The stories in them would inspire me and I’d get out my notebook and write scenes based on the science in the magazines. By the end of the year I was shocked to see I had almost written the first draft of a book. I just had to join the dots.

What genre would you like to try your hand at writing and why?
I would very much like to write a graphic novel. I base a lot of my work on visual art. I write in similar ways to my method of painting. I think I might be able to combine my love for visual art and my love for writing into the one form. I don’t have a studio space and would have to overcome this hurdle first rather than trying to do such a huge project in a tiny one bedroom flat alongside my very neat and orderly husband though.

What book is on your bedside table?
I have different books for reading during the day and reading just before bed. At the moment I have a book called The Gene: An Intimate History by Siddhartha Mukherjee next to my bed and I go back to it every night. It is reasearch for a book I am writing but it is also so fascinating and poetic.

What crime would you like to get away with (and how would you go about it)?
I would like to pick up all the refugees currently living in Australian detention centers and move them to rural Australian towns. So many small towns are struggling to survive and what they need is an influx of people, energy and ideas. If I could just teleport those people out of there I would do it.

Who is your favourite science communicator?
Brian Greene.

What sort of paranormal being would you like to be?
I am quite fond of ghosts. I like the idea that I could continue to watch the world of the living even if I couldn’t participate in it often.

Thanks, Krissy, and good luck with your book.

A convicted paedophile recruited to Liv’s experiment in collective consciousness discovers a way to escape from his own desolation.

A synthetic boy, designed by Liv’s team to ‘love’ men who desire adolescents, begins to question the terms of his existence.

Liv herself has finally transcended the corporeal—but there is still the problem of love.

An Uncertain Grace is a novel in five parts by one of Australia’s most inventive and provocative writers. Moving, thoughtful, sometimes playful, it is about who we are—our best and worst selves, our innermost selves—and who we might become. About: Krissy Kneen is the award winning author of the memoir Affection, the novels Steeplechase,Triptych,The Adventures of Holly White and the Incredible Sex Machine,and the Thomas Shapcott Award winning poetry collection Eating My Grandmother. She has written and directed broadcast documentaries for SBS and ABC television. She can be found on her website, Facebook and Twitter.