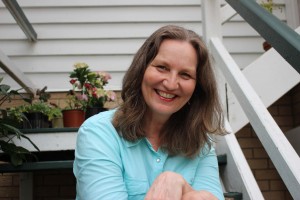 Welcome to Sunday Spotlight, a new series of author Q&As. Today we feature Kelly Lyonns, whose debut novel, The Soldier’s Woman, was released on February 9th. About The Soldier’s Woman: There really were times when being a petite well-bred lady was positively tedious.
Charlotte Everslea, dedicated paranormal artefact hunter, was in need of a little help to retrieve a dangerously powerful book. Not to mention, to rescue some children, thwart a Machiavellian nemesis and evade Napoleon’s Portuguese army. What she didn’t need was an unbiddable overprotective stormy-eyed Redcoat, even if he was sent by fate.
Being both a gentleman and a soldier was sometimes most inconvenient.
Colonel Maximilian Bladewood was used to giving orders and having them obeyed both on and off the battlefield. But the petite golden-haired hoyden, to whose accidental intervention he owed his life, challenged both his authority and his sanity. Regardless, his duty was clear. Even if it included protecting a stubbornly obsessed innocent from the dangers of a war.
Cross-purposed and with the civilised world at stake, fate throws down another challenge – hope for love. All it will cost them are the vows they have each sworn to keep.
I thoroughly enjoyed The Soldier’s Woman by Aussie author Kelly Lyonns (which is book 1 in The Bladewood Legacy) – it’s hard to believe it’s the author’s debut! Brenda – Goodreads

About Theresa: I am an avid reader and book collector with a particular interest in Australian colonial history, circus life during the Great Depression, and the World War II era – an eclectic mix! I write Australian contemporary fiction and have four novels published, with another one to be released in this year, although I am making the switch with my sixth novel into Historical fiction with a dual timeline. You can find me on Facebook Theresa Smith Writes and Goodreads Theresa Smith