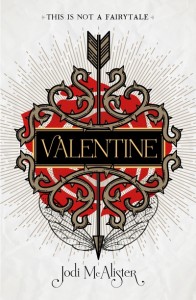 Following on from January’s new releases, we have a whole stack of new titles for February, so many that, once again, we couldn’t hope to feature them all. The following books have yet to be reviewed for the challenge.

Strange and terrible things begin to happen to four teenagers – all born on the same Valentine’s Day. One of these teenagers is the Valentine: a Seelie fairy changeling swapped for a human child at its birth. The Unseelie have come to kill the Valentine – except they don’t know who it is.

Pearl shares a birthday with Finn Blacklin. She’s known him all her life and disliked every second of it. Now Pearl and Finn must work together to protect themselves from the sinister forces that are seeking them out.

But there’s one more problem: the explosive chemistry between them . . . (blurb from publisher’s website)

Jodi is a literary historian and academic from the University of Tasmania and is part of a team working on a project tracking novels by Harlequin Mills & Boon. (You can learn more about the project here.) Quinn Eades’ Rallying (UWAP) is a collection of poetry. It was written alongside Eades’ first book, all the beginnings: a queer autobiography of the body, and before he began transitioning from female to male.

A collection very much concerned with the body, and the ways in which we create and write under, around, without, and with children, this collection will resonate deeply with anyone who has tried to make creative work from underneath the weight of love. This is a collection of poems that are more than poems. They were written with children, under babies, around grief, amongst crumbs, on trains, with hope: with love. This is a book made of steel and honey, muscle and sun, with tongues. Open its pages and you will find more than poetry. You will find moments in time strung across by text, a poetics of the space between bodies, the way that language makes us separate and simultaneously whole. (from publisher’s website) Candice Fox’s latest thriller, Crimson Lake (PRH), has been given some heavy-weight endorsements. Lee Childs called it, ‘One of the best crime thrillers of the year,’ Harlen Coben describes it as ‘a masterful novel’, and James Patterson calls Fox, ‘A bright new star’. (How come this one hasn’t already been reviewed for the challenge?!)

Six minutes – that’s all it took to ruin Detective Ted Conkaffey’s life. Accused but not convicted of Claire’s abduction, he escapes north, to the steamy, croc-infested wetlands of Crimson Lake. (read more about Crimson Lake here)

Kelly Gardiner’s latest novel 1917 is the fourth in Scholastic’s Australia’s Great War series for young readers (ages nine and up). Kelly’s earlier books include the young adult novels Act of Faith (a brilliant historical fiction novel) and The Sultan’s Eyes, both of which were shortlisted for the NSW Premier’s Literary Awards and CBCA Notable Books.

The war in France rages in the skies, and support for the war in Australia turns cold. Alex flies high above the trenches of the Western Front, while a world away his sister Maggie finds herself in the midst of political upheaval. Somehow, both must find the courage to fight on. (read more about 1917, including an endorsement by Dr Clare Wright, here) Nero, an imprint of Black Inc Books, has published Buddhism for Breakups by Meshel Laurie, a comedian and radio personality.

Using Buddhism as a roadmap for navigating the fear, loneliness and grief of a broken heart, Meshel explains how the concepts of Emptiness and Impermanence can help us to see things clearly. With her wry humour and trademark honesty, she shares how one of her biggest challenges turned out to be a golden opportunity for personal growth and greater happiness. (read more here) The above books are only a fraction of the titles by Australian women published this month. You can find a more complete list here.