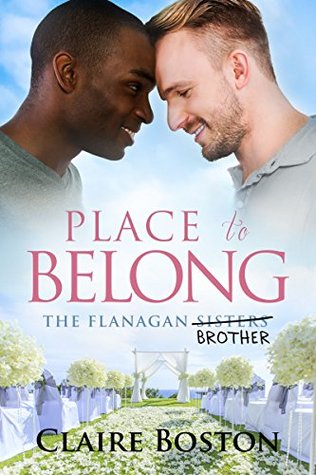 Normally today we’d be posting the Crime roundup, but our editor Bernadette has sent her apologies, so it leaves space for an extra author Q&A that I didn’t think we’d get to see till June. Today’s spotlight is on Claire Boston whose novel, Place to Belong, was released in January. It’s the fourth in her “Flanagan Sisters” series, though that’s a misnomer: the hero is a Flanagan brother – and he’s got his eye on another guy. Over to you, Claire.

Q. What is your favourite scene from your books?
A. There’s a short scene in Under the Covers, the third book in The Texan Quartet series that I love. I remember chuckling while writing it, and every time I read it afterwards, it made me smile. The novel is about Elle, a single mother, and George, a music manager. In the scene, George is looking after Elle’s son, Toby who is five. Toby has just seen George kiss Elle for the first time and he asks George why he kissed her. What follows is an amusing scene in which George tries to explain, but ends up digging himself in to a bit of a hole. Q. What inspired the story?
A. My most recent book, Place to Belong, was inspired by Hayden, one of the heroes in the story. Hayden first made his appearance in the second book in the Flanagan Sisters series, Change of Heart, and I fell in love with him. I wanted him to get his happily ever after and so I had to invent a Flanagan brother just for him.

Q. What genre would you like to try your hand at writing and why?
A. When I started writing, I was writing fantasy not romance. I still have four novels sitting on my computer, unpublished, and I’d like to go back to them and rework them.

Q. What do you like to do when you’re not writing (work and/or play)?
A. I’ve recently discovered a love of book binding and I make my own journals and notepads. I have also been known to race around a motocross track on a sidecar and on a solo motorbike.

Q. Lamingtons or pavlova?
A. Pavlova!

Q. What are you writing now?
A. I’m writing the first book in a romantic suspense series set in the south of Western Australia. I’m still coming up with a series title, but the tagline is: Four childhood friends, one coastal town, and a whole lot of trouble.

It’s such a joy to be writing books set in Australia again and I took a research trip to the area recently and spoke to some experts in various fields.

Q. When did you discover the Australian Women Writer’s Challenge? Do you think the challenge has had any impact on the awareness and discoverability of Australian women writers? Have you personally benefited in any way?
A. I can’t remember when I heard about the AWW Challenge but it was a couple of years ago at least. I know it has made me aware of more Australian women writers and there have been some people who have discovered my work via the website.

Sean Flanagan has spent a lifetime alone and rejected, constantly hiding who he really is.
With a father who deserted him and a mother who despised him, Sean didn’t think things could get much worse … until he was kicked out of home for being gay. Now he’s discovered he has three half-sisters on the other side of the world. This might be his last chance to find people who will love and accept him. But he’s terrified that if they find out who he really is then they’ll reject him like the rest of his family.

Sean arrives in Houston and is stunned by the warm welcome he receives from his sisters. He begins to hope that maybe this time things will be different. That’s when he meets Hayden Johnson. To follow his heart means risking everything with his newfound family. About Claire: Best-selling author of The Texan Quartet, Claire Boston was nominated for 2014 Favourite New Romance Author by the Australian Romance Readers Association. Claire is an active volunteer for RWA as a mentor for aspiring authors and the reader judge coordinator. When not writing she can be found in the garden attempting to grow vegetables, racing around a vintage motocross track, or playing cards and board games – if she can convince anyone to play with her. Claire lives in Western Australia, just south of Perth, with her husband, who loves even her most annoying quirks, and her grubby, but adorable Australian bulldog. You can find her via her website, Twitter and Facebook.