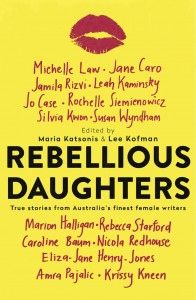 In January and February we read and reviewed 16 collections of short stories, including both fiction and non-fiction, a selection of which I’ll highlight here. First up – and a fitting start after the week that brought us International Women’s Day, Whispering Gums takes us to Rebellious daughters: True stories from Australia’s finest female writers, edited by Maria Katsonis and Lee Kofman. Whispering Gums notes this “carefully-ordered” anthology begins with Marion Halligan, who describes herself as a “good girl” (although Marion does confess to reading forbidden books) and ends with Jane Caro sharing her daughters’ rebellions. Whispering Gums finds that Jane’s “motherly perspective provides a satisfying, logical conclusion to the anthology”. Our reviewer also comments on the framework for understanding the memoir offered by Rebecca Starford’s “analysis of the personal and ethical implications of writing memoirs”. Clearly there are some twists and turns in the narratives. The “youthful rebels are shocked to discover things aren’t as they thought they were or would be”, whether this is discovering “a girl could be no-good but liked” or that sometimes popular girls also get good grades. In concluding, Whispering Gums notes that not all rebellions are resolved, but “in most of the stories, age and experience eventually bring rapprochement” (not capitulation of course!). Another non-fiction collection, Look What You Made Me Do by Megan Norris is the grimmest of topics. Bernadette neatly captures the importance of the title with its clear implication of the “childish anger and inability to accept personal responsibility . . . as the central premise” of the book. To be clear, this book is “about men who kill their children as an act of revenge against their former wives and partners”. Bernadette notes that Norris uses court proceedings, “extensive primary source research and interviews with people affected by or involved with each case”. This gives the book a feel of truthfulness, and Bernadette observes, “although this book is harrowing from the first page to the last, it never feels exploitative or sensationalist”. In sharing her feelings of sadness and helplessness about this text, our reviewer raises the very critical question of what next, asking if there is “a bigger purpose of telling these stories than to shine a light on an almost unimaginable crime?” Jennifer Cameron-Smith gave a 5-star rating to Kyra Giorgi’s The Circle and the Equator: “Thirteen short stories set in thirteen different locations around the world. Individual stories set within key places between 1855 and 1988. Individuals whose lives have been shaped by significant external events, including conflict, hardship, or injury”. Despite the individuality of each story, Jennifer notes the similarities and observes that the “stories are relentless: there are no easy decisions, there are no decisions without consequences, no happy endings”. Jennifer did not “enjoy” these stories, but admired the story telling and, perhaps offering the greatest praise possible for an author, writes that she will be re-reading them. Jemimah declares that “the skill and the purpose to reading and writing fiction is the ability to empathise with the inner lives of creatures outside of ourselves” as she introduces us to Only the Animals by Ceridwen Dovey. Only the Animals takes the reader “through the inner lives, culture and nature of ten vastly different animals . . . From the matriarchal herd culture of elephants hunted in Mozambique, to the hundred-year introspection of a tortoise who began and ended its journey in Russia”. Jemimah states that, although these stories are about animals, they “reveal far more about the human species than we may care to know”. Lastly, we have Thoraiya Dyer, author of the recently released Crossroads of Canopy, who was interviewed by Cat Sparks on the AWW blog last Friday. Stephanie Gunn is an admirer of Dyer’s work, bringing her to our attention through Asymmetry, a collection of four unrelated short stories that “fall under the general speculative fiction umbrella”. Despite the varied nature of the stories, Stephanie recognises “a thread that winds through all of the stories, in that all contain an asymmetry, an imbalance of power”. She describes “After Hours”, a tale of the experience of a new female vet in a rural down, working with the RAAF and their patrol dogs, as a “deeply powerful story, with much sympathy both for Jess and her co-workers, even as those who disparage her. I read this one, and immediately went back to the beginning and read it over again”. Reviews of recently released books include Cass Moriarty’s review of Rebekah Clarkson’s recently released collection, Barking Dogs, and Susan Marks’ review at Newtown Review of Books of Roanna Gonsalves’ 2016 release from UWAP, The Permanent Resident. Both reviews deserve to be read in their entirety. Also worth reading is Roanna’s book launch speech, “The Permanent Resident and the Grandmotherland”, which featured on the AWW blog last month: you can find it here. Another recent release you might want to look out for is Tara June Winch’s After the Carnage (UQP 2016) which, so far, has only received attention from one reviewer, Rosalie on Goodreads. Her review is short enough to be featured in full:

This eclectic collection of short stories confirms the ingenuity of the author. Each story is written from a different point of view; her characters varying from Australian to other ethnic origins, males to females, migrants and ex-pats to refugees, and affluent to working class. Similarly, the stories are set in diverse locations from Australia to France to the high seas.
The themes are blunt; incompatible relationships, dysfunctional families, social class clashes, domestic violence and abuse, and Winch’s writing is often acerbic but frequently there is a last line when self-realisation gives a story a positive finale. This is wonderful writing. A good note to end on. About Sharen: Sharen Phillips loves to read, loves reading Australian women writers and is pretty excited to discover the Australian Women Writers Challenge. She lives in a large old house in a regional town and wishes there was a way to make a living from reading and drinking tea!