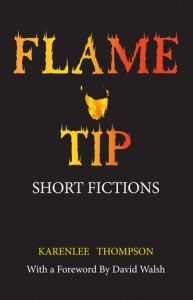 Today in the spotlight we have Karenlee Thompson, whose collection of short stories, Flame Tip, was released on 1 March. Karenlee elected to answer the following out of a range of quiz questions. Welcome to the AWW blog, Karenlee!

Why are you the best person to have written Flame Tip?
This collection of fictional pieces is tenuously linked by the Tasmanian Black Tuesday bushfires of 1967. I was eight years old when the fires hit and I remember only the excitement of it all: the colour of the sky, the thick haze fattening the air, getting out of school, being surrounded by strangers, paddling at the beach. So, whilst I was physically there, childlike remembrances meant that my fictions could remain untainted by memoir, if that makes sense.

Describe how you research and the challenges of incorporating research into your story.
My research methods are always different and are often hit and miss. Writing these stories themed around fire, I awoke from a strange dream with only the memory of flying and the name ‘Medusa One Snake’ so I Googled Snake+Fire+Flying and, after much weaving in and out of the web, discovered research being undertaken by NT based journo and ornithologist Bob Gosford about birds harnessing fire by dropping burning sticks. That basically led to my story ‘Medusa One Snake and her Band of Three.’ There’s a fair bit of time wasting and wandering off track when I’m researching online. That day, for example, I discovered that it is illegal in Alaska to whisper in someone’s ear when moose hunting!

Tell us something about yourself not many people would know.
When I was young, I dreamed of playing Aussie Rules football, something that would have seemed more likely to occur if I had a sex change than any other way. I recently watched the first televised women’s AFL match and I cried with joy (we’ve come a long way) and sadness (I was born too soon).

Lamingtons or Pavlova?
Pav all the way.

How did David Walsh become involved and write the Foreword to your collection?
I wrote what I thought was a rather witty letter to the owner of Tasmania’s Museum of Old and New Art (Mona) because I wanted something to help my work stand out in the crowd. I knew he was of a similar age (okay, he’s a few years younger) and I thought he would connect with the stories. When I sent my initial letter and samples, I marked the email ‘private and confidential’. It was my way of trying to ensure it reached him and didn’t just get trashed, and I will never forget his first email to me ‘why is this f***ing confidential?!’ I literally spilt my wine and fell off my chair.

What are your thoughts on the AWW challenge?
The Australian Women Writers Challenge is a wonderful initiative and I think it does provide a forum for new names to be introduced. Two of my favourite blogs are ANZ LitLovers and Whispering Gums, both of which feature AWW posts. Personally, I am thankful for any opportunity to be able to promote my book in a healthy non-intrusive way.

Thanks, Karenlee, and good luck with your book.

Flame Tip is a slim collection of short fictions that explore different realities and perceptions arising from the Tasmanian bushfires. The pieces in this collection are as diverse in subject matter (infidelity, love, suicide) as they are in length. Despite the horror of one day of infernal terror, these stories reveal nuances of character and place through resilience, empathy, honesty and humour. You can read an excerpt read via the Hybrid Publishers website.

About: Karenlee Thompson, a writer of fiction and non-fiction, is passionate about reading and writing the Australian voice. She has been published by The Weekend Australian, Antipodes, Woman’s Day, The Big Issue and Writing Queensland amongst others. She has written short stories for children (NSW Education Department’s Countdown and Orbit) and her novel 8 States of Catastrophe (Brolga) was published in 2011. She was a finalist in the Tasmanian Writers’ Prize in 2015 and in 2016. Karenlee can be found on Twitter.