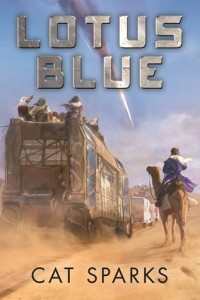 Your debut novel, Lotus Blue, is ambitious in its scope – several point-of-view characters, some of whom aren’t all (or at all) human, and a very far-future dystopia. It’s clear you didn’t take an easy road with this one. What drove you to write a book like this, and will you do it again?

A simple answer: I didn’t know what I was doing when I started – or for a good deal of the process. I did not comprehend the vast expanse between the viable mechanisms of long fiction as opposed to short. Years of writing short stories had locked me into a particular set of rhythms and habits. I failed and failed and failed again, binning at least 300,000 words in the process. Sheer blind stubborn force of will kept me getting back up and trying again. In 2011 I managed to score myself a New York literary agent. I reasoned that failing on my own was one thing, but failing to deliver a viable narrative with a kind, patient and encouraging agent standing by to sell the finished product would be something entirely more shameful. Meanwhile, I acquired a secret weapon – a brutally honest first reader, a talented writer himself who had known me long enough and well enough to have the guts to not pull any punches. My early drafts were truly abysmal. A lesser friend would have lied to my face – lucky for me, this one didn’t. The big light bulb moment came while reading a Jo Nesbo thriller. I attempted to mimic the structure of one of his books, recognising that the environment was a character in itself and needed room to breathe and be showcased. I figured the best way to achieve this was through multiple POVs.

When your excellent short story collection, The Bride Price, was published by Ticonderoga Publications in 2013, I remember you telling me that it was satisfying to finally be able to show a real, live book to your hairdresser. How does it feel waving a rather heftier novel around?

I finally feel like a genuine author. I know that sounds insufferably lame, but my experience has been that the world at large (so much as it acknowledges science fiction authors at all) only respects you in regards to your claimed profession if you have a professionally published novel on the shelf. Now that I’ve achieved this feat, I’m hoping I’ll get over the need for hefty waving.

One effect of your apocalypse being so far in the story’s past is that people have lost the connection that we have with technology, and most of your characters seem to barely understand it. This peculiar state leads to an almost steampunk vibe; was that intentional, or a natural consequence of this world’s history?

Not intentional at all – my ambitions were solidly rooted in the decades old traditions of post apocalypse literature. I’m happy if the book somehow managed to spill beyond its envisioned parameters, but steampunk attributes never entered my consciousness.

Lotus Blue hints at a climate change-related apocalypse in its distant past, as do many of your short stories. Climate change is obviously a huge threat looming over us all, but what’s motivated you personally to write about it so extensively, and for so long?

Because I am scared witless, both of it and of our inability to get our collective acts together and fight such a grave existential risk. Because, as Margaret Atwood has pointed out, it’s not climate change, it’s everything change. I’ve been reading post apocalypse novels since I was a kid and I totally believe we are capable of trashing our own future to such catastrophic extents. Of course, there is always the distinct possibility that we will demolish ourselves via rampant, unleashed synthetic biology, cyber hacking or rogue AI before we reach catastrophic climate alteration, so there’s that.

In addition to your climate-change fiction, you’re currently undertaking a PhD on the topic, specifically “The 21st Century Catastrophe – Hyper-capitalism and Severe Climate Change in Science Fiction”. How has this endeavour changed your reading and writing of the genre?

I have become a research junkie. I read more deeply than I would ever have thought possible and I take notes. Lots and lots of hand scrawled, undecipherable notes. The PhD changed everything, ramped up my absorption and comprehension levels to 11. It has made me smarter, but a total bore at parties.

Like me, you’re an editor as well as a writer. From this position of sitting on the fence, what’s your best advice for a new writer hoping to attract positive attention from fiction editors?

Write sharp and sassy – style is not an optional extra. Have something to say. Familiarise yourself what others have written before you and alongside you. Consider your prose as value adding to the genre rather than just about expressing yourself. It’s a frantic, digitally vertiginous landscape out there. Make your input worthy.

You’re one of the most extraverted writers I know, and being a people person certainly goes against the stereotype of the writer as an awkward hermit. I imagine the solitary endeavour of writing might be difficult for someone who prefers the company of others – is that the case for you? And does extraversion offer any advantages for your writing?

My big problem is that I can’t say no, whether to dinner invitations, anthology invitations, offers to direct festivals, speak on radio, on panels, teach school students, write cli fi essays…whatever. I go “hey, yeah, that sounds great!” and meanwhile my fiction word count lags steadily behind. If I want to have another novel on the shelf within a reasonable timeframe, I am going to have to start saying no. The writing itself isn’t the problem, it’s the perpetual distraction.

Just a few months ago, you moved from Wollongong to Canberra. What has this meant for you in terms of community, and writing space?

Our new house is cool beyond belief. Three levels made of Jarrah wood perched upon a hill, it has the ambience of an old wooden clipper so we call it the pirate ship. We moved interstate to be closer to friends. Wollongong was lovely, but isolated. We wanted more face-to-face contact with the spec fic writing community, amongst few other things.

Where do you keep all your awards, anyway?

Since the move, they’re stuffed into a cardboard box at the bottom of the wardrobe in the guest room. I had them displayed on the top of a set of drawers in Wollongong, but I reckon they’ll be staying in that box indefinitely. Which doesn’t mean I don’t care for them, it just means it’s time.

Synopsis of Lotus Blue
Seventeen-year-old Star and her sister Nene are orphans, part of a thirteen-wagon caravan of nomadic traders living hard lives travelling the Sand Road. Their route cuts through a particularly dangerous and unforgiving section of the Dead Red Heart, a war-ravaged desert landscape plagued by rogue semi-sentient machinery and other monsters from a bygone age.

But when the caravan witnesses a relic-Angel satellite unexpectedly crash to Earth, a chain of events begins that sends Star on a journey far away from the life she once knew. Shanghaied upon the sandship Dogwatch, she is forced to cross the Obsidian Sea by Quarrel, an ancient Templar supersoldier. Eventually shipwrecked, Star will have no choice but to place her trust in both thieves and priestesses while coming to terms with the grim reality of her past—and the horror of her unfolding destiny—as the terrible secret her sister had been desperate to protect her from begins to unravel.

Meanwhile, something old and powerful has woken in the desert. A Lotus Blue, deadliest of all the ancient war machines. A warrior with plans of its own, far more significant than a fallen Angel. Plans that do not include the survival of humanity. About Cat: Cat was born in Sydney and has traveled through Europe, the Middle East, Indonesia, the South Pacific, Mexico, North America and China. Her adventures so far have included winning a trip to Paris in a Bulletin Magazine photography competition; being appointed official photographer for two NSW Premiers and working as dig photographer on three archaeological expeditions to Jordan. A graduate of the inaugural Clarion South Writers’ Workshop, she was a Writers of the Future prize winner in 2004. She has edited five anthologies of speculative fiction and sixty-five of her short stories have been published since the turn of the millennium.

Cat has received a total of nineteen Aurealis and Ditmar awards for writing, editing and art including the Peter McNamara Conveners Award 2004, for services to Australia’s speculative fiction industry. She was the convenor of the Aurealis Awards horror division in 2006, a judge in the anthologies and collected work category in 2009 and the short SF division in 2013. She can be found via her website and on Twitter.