April 2017 Non-Fiction Round Up 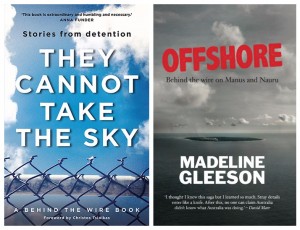 During April, thirteen reviews featuring eleven different titles, were explored and evaluated by our growing group of non-fiction bloggers.

The issue of refugees and mandatory detention was scrutinised via two separate books and three reviewers.

The five editors of They Cannot Take the Sky are part of the Behind the Wire project – an organisation that works with people who have experienced mandatory detention in Australia, Papua New Guinea or Nauru. Their aim is to document ‘the reality of the people who have lived it’.

Jennifer provided more thoughtful insights in her full review but summed up by saying, Theresa @Goodreads gave us a brief summary of the Stella longlisted book Offshore: Behind the Wire on Manus and Nauru by Madeline Gleeson (NewSouth Books, 2016) while I shared my thoughts (and frustrations) about it @Brona’s Books. I felt that,

Gleeson has put together a thoughtful, cohesive and detailed document. Her anger and frustration at the living conditions on Manus and Nauru and the uncertainty around processing individual claims is palpable. Yet Offshore still offers the reader opposing ideas, contradictory evidence and controversial opinions in an attempt to provide a balanced argument.

The problem seems to be how we actually perceive asylum seekers and refugees. Currently our ability to perceive, know or understand all the reasons why this situation has occurred are shrouded in double speak and political obfuscation. This ignorance creates fear and distrust.

Morally and ethically we know what should be done, so why aren’t we doing it? What is the political expediency that is driving our current course of action? Why are we deliberately creating more damage for people already damaged? What will the long term cost for this psychological damage be? For them and for us? How can we possibly think that it will end well for any of us to create this level of trauma in human beings?

My only problem with Gleeson’s book is that none of these questions could be answered.

Quentin Bryce handwrote more than fifty letters a week during her six-year term as Governor-General. There are letters to prime ministers Rudd and Gillard, letters to and from friends including Wendy McCarthy and Anne Summers, letters to and from war veterans, Indigenous elders, girl guides and Corporal Mark Donaldson, VC.

The letters I enjoyed most were the ones between Quentin Bryce and various children. In each letter, she seemed to strike just the right (or should that be write?) note. Each response is clearly personal, each observation offered, each question asked is warm but never intrusive. There are lovely colour photographs as well, documenting different aspects of the life of a Governor-General.

This beautifully bound hardback book features full colour plates and reproductions of many of her letters. Royalties will be donated to Murdoch Children’s Research Institute. Sexual equality is next up on our April journey through non-fiction. Evolution, myth making and biological imperatives are all discussed by Theresa @Goodreads in her full review of Testosterone Rex: Myths of Sex, Science, and Society by Cordelia Fine (Icon Books, 2017).

Testosterone Rex is also about science literacy – and particularly, maintaining a healthy skepticism of science as presented by the media. So many of the findings Fine discusses were ambiguous and complicated, and this is never presented in the mainstream coverage.

The book is written in an engaging and accessible tone. Fine’s writing is quite quippy, and each chapter starts with an anecdote. This helped to keep me going, and I didn’t find the science too complex or difficult to absorb. Given the amount of publicity Clementine Ford’s Fight Like A Girl (Allen & Unwin, 2016) has had (including topping last year’s Top 5 viewer voted books on the ABC’s The Book Club), Amy @Lost in a Good Book is the very first blogger review I have seen.

(Apologies to Jemimah @Oddfeather whose review of Fight Like A Girl flew under my radar last year.)

Both felt the book resonated strongly with their own lived experiences, which is similar to the feedback I have had from regular customers at work.

So many of my own experiences are laid out in this book. The fact that I can agree with so much of Ford’s words should be worrying, but it’s not. They’re a comfort because it reminds me that I’m not being paranoid or silly when I hold me keys in my fingers walking back to my car late at night, it reminds me I’m not overreacting when I feel uncomfortable having a stranger talk to me at the bus stop when he’s a little drunk, worried what he’ll say and what I’m safe to respond with. It makes me think of all the times I’ve placated a thought to save hurting a man’s feelings and not stood up for something out of fear of personal verbal attack. It’s reminded me that the passion and the fight I feel inside me is one that many women out there are feeling and that it’s ok to feel this way. Following on from all the buzz surrounding Marie Kondo’s The Life Changing Magic of Tidying we have Ruth Quibell’s The Promise of Things (MUP, 2016).

Quibell guides us to think with greater depth about the multifarious relationships we form with things. Our things can bring freedom, can boost our mood and provide comfort. They can also bring crushing disappointment, particularly when we imagine the person we will be when we one day acquire a certain thing – a brown velvet jacket, in Quibell’s case – only to discover the thing is just as we envisioned, but we are unchanged. Pinning our hopes for ourselves on coveted objects ‘lends our ideals a hint of tangibility’. She offers advice for those whose hopes have been let down by their coveted objects:

Instead of running from failure and becoming trapped within a cycle of wanting, buying and later discarding without end, we can explore our failed objects. What nebulous future self drew us to this ideal object in the first place? N.B. Each month I try to focus on the books that have not been highlighted in previous posts. However all of the links for April’s non-fiction reviews can be found here.

New Non-fiction Titles to Look Out For in May

Australiana to Zeitgeist: An A–Z of Contemporary Australian Art by Melissa Loughnan (Thames and Hudson)

The Other Mother: A Tale of Love, Blending Families and Becoming A Wicked Stepmum by Kelly Chandler (Affirm Press)

I joined the AWW team in 2015 as the History, Memoir, Biography editor. In 2017 I moved to the Non-fiction (General) page.