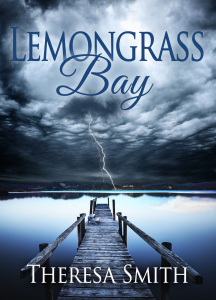 It’s my privilege to introduce to you today AWW’s very own Theresa Smith who joined the AWW team earlier this year and writes our Historical Fiction roundups. Her book, Lemongrass Bay, will be released on 14 May.

I used to write stories when I was a child. I have a vivid memory of sitting up at my grandmother’s dining room table, papers spread out, a dictionary and an atlas by my side. Grandma would buy manila folders in all different colours and we would staple my finished stories into a new folder, effectively turning them into a ‘book’. While at university I wrote a full length novel for a women’s fiction competition, but it was a terrible novel (truly cringe-worthy) and consequently it died quietly, never to be seen again. By this time I was studying Journalism and Sociology for an Arts degree while simultaneously studying Marketing for a Business degree, all of which required a great deal of writing, just not the fictional sort. I didn’t write fiction again until 2012, some 15 years later, when I moved with my family to the outback. I took a six-month break from work and one month into that break I felt gripped with an urgency to write a novel. So I did. Fourteen months later I self-published it, mainly because I’m impatient by nature, and have continued to self-publish ever since. Sometimes it’s easier to just stick with what you know, particularly once you’ve got a good process laid out.

The inspiration for Lemongrass Bay initially came from a news story I read on the ABC news blog about a man who had been struck by lightning while standing on a beach in Darwin. He survived the lightning strike, but there were very few details about the condition he was in and I found myself churning that over in my mind, so much so, I was compelled to start googling lightning strike victims and it just went on from there.

The story I began to write, though, was vastly different to what has ended up being Lemongrass Bay. I had set the original story in Darwin, in a seedy run down apartment block, with only two characters. At around the 20k word mark, I felt the story was depressing and couldn’t envisage making it any less so.

I took a break and put it away, determined to not force anything and consequently waste anymore time on a dead idea. Often when I’m in between projects or taking a writing break, I’ll begin watching a new TV series, and in this instance, I began watching Hart of Dixie, a quirky US comedy-drama set in a small town in the South. About half way through season 2, my mind started ticking over the idea of writing a quirky Australian novel set in a remote coastal town. I had visited Karumba up in the Queensland Gulf with my family the summer before and the location appealed to me as a setting. Having lived in Mount Isa, Queensland, for the last five years, I’m still often struck by that ‘small town feel’ remoteness gives to a town, no matter what its size.

Armed with this fresh inspiration, I returned to my manuscript, plucked out the lightning strike scene I had written, and canned the rest. The story has evolved over the last two years and there was a lot of research undertaken on the various medical references as well the social and community issues that crop up throughout the story. I’d love to turn it into a series but haven’t committed to that yet. I’ll see what the readers think and if they demand more, I’m certainly open to it.

Tell us about your plotting/drafting style.

This has evolved greatly with each book. I used to just sit down and write a first draft, worrying about research and plot holes later. My novels have always been rather character driven and I’ve often written an unplanned twist based entirely on a character’s personality. I tend to plan a lot more now though, beginning with research and drafting up timelines, character names, key relationships, etc. It saves time in the long run but it also allows me to write a much cleaner first draft. I do a lot of re-writes though, and with each one the story expands and contracts, depending upon feedback from my critique partner and beta reading group. I revised Lemongrass Bay fourteen times with twelve different people proofing and offering opinions before the final edit.

What authors and types of books do you love the most and why?

My favourite books are historical fiction, particularly the more literary ones. I have a real love of language, poetic verse, and deeply touching prose. Recent favourites are Skylarking by Kate Mildenhall, The Good People by Hannah Kent, and The Light Between Oceans by M.L. Stedman. I read most genres, but these are the types of novels I love best. Bitter Greens by Kate Forsyth still remains a firm favourite. I’ll read anything about WWII, with The Nightingale by Kristin Hannah reining as one of my favourite books of all time.

If you could go back in time for a year, which historical era would you choose to live in and why?

Being a modern history enthusiast, there are so many years I’d like to go back and take a peek at. However, if I can only pick one, it would be 1902, when Australia became the first country in the world to give women both the right to vote in federal elections and the right to be elected to federal parliament. I can hardly imagine what that must have felt like for the Australian Suffragettes who had been fighting for this outcome. I’d like to go back and stand in a polling booth as woman for the first time, feel that sense of achievement that comes with taking part in something so monumental.

When did you discover the Australian Women Writers Challenge? Do you think the challenge has had any impact on the awareness and discoverability of Australian women writers? Have you personally benefited in any way?

I discovered the Australian Women Writers Challenge about March of last year through a blog post by Natasha Lester. I instantly signed up as a reader and read and reviewed 20 books for the challenge last year. This year, I have joined the team as Historical Fiction Round Up Editor and I’m absolutely loving being involved from the other side. I have personally benefited enormously, the challenge inspiring me to take my reviewing more seriously by starting up my own reviewing blog. I have also met some excellent women online through the challenge and am constantly inspired by the talent we have here in Australia. The challenge has influenced my reading choices profoundly and I now gravitate towards books written by Australian women, where in the past, I didn’t take all that much notice. I’d like to think I’m not the only one who has been influenced in this way, and judging by the reading activity I see on social media, I’m pretty sure the challenge is influencing others also.

Thanks, Theresa, and best of luck with your new novel!

When lightning strikes…
Emma-Louise and Rosie have been friends for life, their bond unshakeable. Both women are on the verge of a new life, a second chance at love and happiness, but the past is about to catch up with each of them.
A story of passion, resentment, secrets, and lies.

Lemongrass Bay is available both in print and as an ebook and can be purchased from all major online book retailers including Amazon Australia, Kobo, iTunes and Google Play Books. Theresa can be found via her website and on Twitter @TessSmithWrites.