Childrens and Young Adults: Round Up Four – 2017 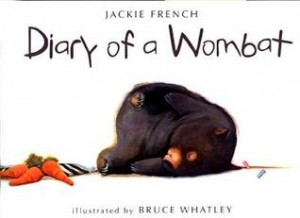 Welcome back for another month taking a peek into the reviews of children’s and young adult books! Anna took at look at Diary of a Wombat by Jackie French, the story of a naughty wombat who takes over the lives of some humans over the space of a week (while getting a lot of sleep). Anna found the book very appealing:

“The ending is quite endearing, and while one can’t help feeling a little bit sorry for the humans in the story, they have clearly succumbed to the wombat’s charms.”

Brona reviewed My Brother by Dee Huxley, a CBCA short listed book which takes a very personal look at family.

“Everything about this story is carefully considered. From the placement of the text on the page, to the spacing between words and within certain words. The poem-like text that uses the language of grief and loss so sparsely and evocatively. To the black and white graphite illustrations that are full of detail and pathos. Colour is gradually added in the final few pages to offer hope and some lightening of the mood.”

Rebecca reviewed Archie and the Bear by Zanni Louise, the story of a friendship between an imaginative boy and a bear. She found it the perfect book for highly imaginative kids, particularly those who appreciate a creative solution. Jess explored another book which brings imagination and adventure – The Beast of Hushing Wood by Gabrielle Wang. She particularly liked the way that it reinforced the idea that imagination was fantastic to slightly older readers – at an age when facts are often presented as more valuable.

Christine also reviewed a Gabrielle Wang book, Little Paradise. This is a fictional account of the author’s mother, particularly looking at experiences of living in Melbourne and Shanghai during the Second World War:

“Little Paradise is great reading for both young adult and mature readers. I would recommend it to anyone who is interested in learning more about Australia and China.”

Louise has a wonderful interview with Anna Walker, the author of Florette, available – I highly recommend going to both read it and to enjoy the beautiful illustrations!

Jess reviewed The Impossible Story of Olive in Love by Tonya Alexandra which tells the story of a girls who has a curse on her making her invisible to all but her one true love. Jess found it an intriguing read, but wasn’t sure how she really felt about it:

“I wanted to love this book so bad. I was so excited to be asked to review it and eagerly dived into the book full heartedly. I was sucked into the story almost immediately and despite reading it quickly I’m still mystified and confused by my feelings on the book, even now some months later.”

Emily and Cassandra both reviewed The Secret Science of Magic by Melissa Keil which looks at a relationships and that point between school and beyond. Emily felt that the relationship in the book was pleasantly slow burn, allowing her time to be invested in the characters. Cassandra wished that this book had been around when she was younger:

“I really enjoyed this story, which — more broadly — tackles the YA issues of “coping with the end of school” and “what next”, as well as the universal human issue of self-acceptance. The romance was tentative and sweet, and my heart broke for Sophia and her confusion and social anxiety.”

Christine reviewed Yong: The Journey of an Unworthy Son by Janeen Brian which follows the reluctant journey of a young Chinese man from China to South Australia and Victoria in the mid-nineteenth century. “As author, Brian does a brilliant job portraying a teenager troubled by an uncertain future full of conflicting mental and emotional challenges. While Yong desperately wants to win his father’s approval by being capable and brave, he constantly fears his unworthiness, as he cannot easily comprehend the reasons behind some of the things that adults say and do.”

Elizabeth looked at Finnikin of the Rock by Melina Marchetta, the first in the author’s fantasy trilogy. Elizabeth felt that it showed both experience as an author, and inexperience as a fantasy author – leading to some patchy results at times.

“Although the story was compelling, the pacing was also a bit slow. At one point, Finnikin is literally forced to backtrack in order to advance his relationship with Evanjeline in a manner that felt contrived and quickly undermined.”

Nadia reviewed Ballad for a Mad Girl by Vikki Wakefield, a book about grieving and living:

“I found this book to be a deliciously creepy and disturbing read. Don’t read into the early hours of the morning when every creak and moan of your house makes you jump. It would be infinitely better to read this with all the lights on.”