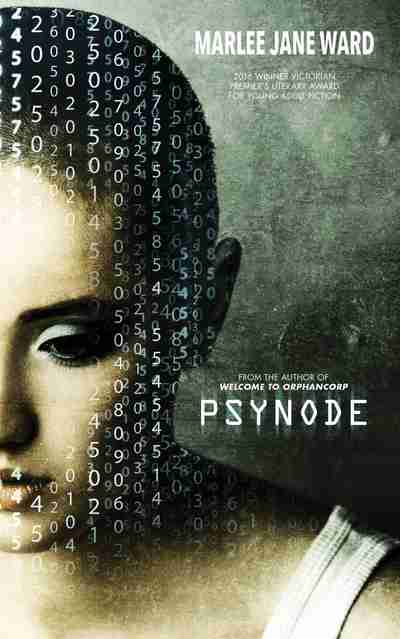 Today’s Q&A is with author Marlee Jane Ward whose YA Speculative Fiction novella, Psynode, is released this month. Welcome, Marlee Jane, and thanks for participating in Sunday Spotlight.

How many novels have you written and published and what prizes, if any, have they won?
I’ve published one novella – Welcome To Orphancorp, the first in my Mirii Mahoney series. It was published because it won the Viva La Novella prize run by Seizure, and went on to win the Victorian Premiers Award for YA fiction. The sequel, Psynode, comes out in May, also through Seizure.

How would you best describe Psynode to a new reader? This is the second in the series, so first I’d get the new reader to check out Welcome To Orphancorp. Then, I’d have to say that Pysnode is a little bit gritty, a little bit cyberpunky, and a lot dystopian. It’s the story of Mirii Mahoney, who’s just aged out of her orphancorp and sets off to infiltrate a shady corporation to find her friend and sometimes lover, Vu. It’s also about that scary period when you take your first steps into the world on your own.

Describe your work space.
I like to get my writing done at my local café. There’s a table that I set myself up at, the same one every time, and I stay for a few hours, drinking coffee and working. I go as long as I can, listening to some sonic instrumental rock music like Mogwai or God Is An Astronaut, some ambient electronica like Bonobo or some ambient white noise.

What is your all-time favourite book by an Australian woman writer?
There are a few, but the one that pops into my mind now is Playing Beatie Bow by Ruth Park. I’ve read that book so many times. She creates such a rich world and such beautiful characters. When I read it I feel like I’m visiting old friends.

What would you like to tell your young(er) self before she starts out as a writer?
Everything doesn’t have to be perfect all the time. You can just write for the love of it, and not worry that it’s got to be some amazing piece of literary genius. I’d want to take some of the pressure off and let myself know that no word is ever wasted, all of it is practice and every story will make your next one better.

If you could go back in time for a year, which historical era would you choose to live in and why?
If I were a man, I’d go back to anytime. As a woman, I’d probably not want to live in any other time period except the 19th and 20th centuries. Maybe the late sixties, when gender roles were changing and liberation was on the forefront.

When did you discover the Australian Women Writers Challenge? Do you think the challenge has had any impact on the awareness and discoverability of Australian women writers? Have you personally benefited in any way?
I came across the Australian Women Writer’s Challenge the way I come across everything: on Twitter! I think the challenge itself, and having a comprehensive list of what is out there and what is coming out from the many fabulous women in this country, is magnificent.

Thanks, Marlee Jane, and good luck with your book.

Having barely made it out of Orphancorp alive, Mirii is on a mission to find the most important babe in her life, Vu. Vu has been taken to ‘Psynode’, a secret facility operated by the megacorp Allnode.

After wrangling her way into the Allnode warehouse as a picker, Mirii meets Rowe, the daughter of one of Allnode’s execs, who may just be the perfect person to help her with the mission.

But life at Allnode is far from cushy and Mirii has to battle her way through the dangers of her new job, the corps that she knows are watching her and get to Vu before it’s too late.

About: Marlee Jane Ward describes herself as “a writer, reader and weirdo from Melbourne, Australia.” She grew up on the Central Coast of New South Wales and studied creative writing at the University of Wollongong. She also attended the Clarion West Writers Workshop in 2014. Her book, Psynode (Seizure, May 2017) is described by her publishers as for an audience of 12-18 years. Marlee can be found via her website and on Twitter.