May 2017 Round Up: History, Memoir and Biography 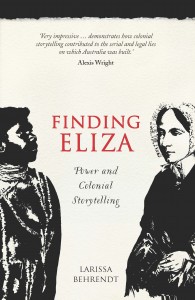 After the April deluge of reviews of memoirs, the month of May has offered up a smaller, but more varied, collection of reviews. Fourteen books were reviewed during May by sixteen reviewers. Although the hype of the Stella Prize has abated, shortlisted titles continue to attract attention. Maxine Beneba Clark’s memoir The Hate Race has now been reviewed eleven times, and Catherine de Saint Phalle’s memoir of her parents Poum and Alexandre garnered its third review.

Behrendt has written a concise and engaging analysis of the representations of Aboriginal people in stories told by white people. Starting from the story of Eliza Fraser, shipwrecked on K’gari (now known as Fraser Island), Behrendt explores issues of race, gender, colonisation and cultural appropriation. She extends beyond the Fraser story, though, looking at themes across stories from Coonardoo to Mutant Messages Down Under to High Court decisions in Native Title cases.

approachable because she doesn’t come across as judgmental – she tries to understand why stories are told in certain ways before discussing the problems those stories create, represent, and/or perpetuate. (Review here.)

Bill Holloway, writing at The Australian Legend, also reviewed Finding Eliza. He noted Behrendt’s legal background, which attracts her to the question of cui bono (who benefits?) from Eliza Fraser’s story. Behrendt suggests that it was “framed right from the beginning as a tale to serve colonial interests”. She goes on to discuss  other stories which have demonized Aboriginal people, and “then offers a striking, shaming example of a Genuine Frontier Captivity Story” in the testimony of Indigenous people in the report of the Human Rights and Equal Opportunities Commission Bringing Them Home. Bill found the book “a surprisingly easy read” although perhaps more akin to “a prosecutor’s summing up maybe, with much of the evidentiary heavy lifting left to others, in particular historians Kay Schaffer and Henry Reynolds.” The question of indigenous representation is also addressed in Liz Conor’s book Skin Deep: Settler Impressions of Aboriginal Women. Lauren Robinson’s review on the Australian Women’s History Network blog described Conor’s book as an “insightful analysis of the intersections between racism and misogyny in Australian society” whereby “an uncritical set of truths…were in fact based off token eyewitness accounts”. As with Behrendt’s book, Conor’s book “continually highlights the ongoing relevance of the dark history Conor seeks to illuminate” by linking “the disparaging and racist historic representations of Aboriginal women with continuing disrespect for Aboriginal culture and peoples today.” Lauren noted that “Conor’s deep engagement with the source material” contributes to this “important and yet often forgotten element to writing history, particularly Australia’s colonial history.”

Three biographies/diaries of three very different women were reviewed during May. Therese Petray reviewed Julia Baird’s well-received biography Victoria The Queen, which continues to attract reviewers, although she admitted that she would not have picked it up were it not long-listed for the Stella and “aside from the feeling of accomplishment that I finished such a (literally) weighty tome…I will probably rarely think about it again.” Bill Holloway reviewed Penne Hackforth-Jones biography of her great (or great-great) grandmother Barbara Baynton: Between Two Worlds.  Barbara Baynton was featured in a guest post by Morgan Burgess on classic or forgotten Australian women writers on the AWW site. Bill’s review queried Hackforth-Jones’ reliance on Baynton’s own stories as a biographical source, although he noted that the author is “explicit in quite a number of places in her narrative about assuming Baynton’s fiction is autobiographical”. Although acknowledging that Hackforth-Jones has set out her methodological reasons “successfully, I think”, Bill wrote:

Add to this the reliance PHJ [the author] places on family anecdotes, and Baynton’s own wilful and frequent misstating of her antecedents, including in official documents, and you can see her account of Bayton’s early life – her childhood, first marriage and the birth of her three children – skates perilously close to faction. (Review here.) However, there is no mediation of the biographer in Blanche Mitchell’s diary, published as Blanche: An Australian diary 1858-1861, reviewed by Julian Leatherdale. Blanche was the youngest daughter of Sir Thomas Mitchell, Surveyor-General of NSW, “a wealthy middle class colonial official who garnered fame and admiration as an explorer, map-maker, artist, scholar and eminent public figure”. Blanche’s diary is written after her father’s death, when the family is in relatively straitened circumstances, albeit maintaining good connections with other prominent colonial families. Julian found the entries

emotive and unvarnished, swerving from joy in simple everyday pleasures (books, walks, food) and the thrill of an evening with a handsome young officer to grief over the absence of friends in England, the deaths of loved ones and self-criticism for her shortcomings.

He finds the diary “a wonderful resource for historians and… [an] insight into the world view and daily routines of a young woman in colonial Sydney”. (Review here.) Shifting the focus from New South Wales to South Australia, Yvonne Perkins at Stumbling Past reviewed South Australia on the Eve of War, a compilation of papers from a conference held in August 2014 to mark the centenary of WWI in that state. Yvonne wrote that

The time between the 1890s and the outbreak of war in August 1914 should receive more attention as it was during this era that people formed the attitudes which they brought with them to the Great War. But history is more than a series of wars with a bit of peace in between. This era is fascinating in itself as it was the era which saw the birth of Australia as a newly unified nation.

The ten chapters of the book, each written by a different historian are “easy to read overviews of various aspects of life in South Australia” that a busy reader can pick up and put down. Moreover One of the historians who contributed to this collection on South Australia was Jill Roe, who died recently. Sue at Whispering Gums reviewed Roe’s Our Fathers Cleared the Bush, which Sue described as “an amalgam of memoir/family history, regional history and historiography.” Through its “lovely conversational tone”, the reader learns about life on the Eyre Peninsula from the 1840s to the 1960s and beyond, shared through the prism of Roe’s family’s experience. However,

while we come away knowing the skeleton of her life, this is definitely not a memoir. The focus is the history…., [and] as well as telling the history, she also shares her methodology and her sources….. For some readers, Roe’s historiographical discussions might get in the way of the history itself, but I enjoyed getting to know the historian’s mind…. Roe says, early on, that her approach to history is “post-modern, in the sense that it can’t come to a definite conclusion”. That is certainly what she has presented here – a story about a region that tells us much but which also leaves many questions to be answered. (Review here.)

Which is what reading history, biography and memoir is often about, I guess: telling, but leaving questions to be answered…for now, anyway.