May Non-Fiction Round up 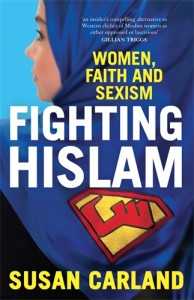 I’m delighted to say that each month this year, there has been a slight but steady increase in review numbers for general Non-fiction. During May we had 11 reviews for 10 different books. Christine was our top contributor with four reviews.

The only new release featured this month was Fighting Hislam by Susan Carland, reviewed by Jennifer @Goodreads. Susan Carland is now Dr Susan Carland and Fighting Hislam began life as her PhD dissertation. She discusses classical Islamic law and how it has been viewed through patriarchal, sexist lenses down through time and how feminism has been viewed with wariness by Muslim women as a Western, colonial, anti-religious movement. Jennifer, in her review, brings us up to speed on who Carland is and why she converted to Islam. She was impressed with the diversity of opinions in the book and highlighted how many ‘assumptions’ about Islam have become ‘fact’. Jennifer,

finished this book wondering about the future. Some of the fight against sexism in Islam is similar to battles fought (and still being fought) in the community more broadly. Equality may have been achieved in some societies in relation to some aspects of life, but the battle continues. And the answer? Alas, there is no single answer: the community is too diverse for a single, simple answer. But I can hope that the conversation continues. This is a book to read and reflect on, to discuss with others. For my own part, I saw many similarities between the roles of Muslim women and the roles of women more generally over the past four or five decades. Far more similarities than differences. The oldest book reviewed during May takes us back to that awkward time of the mother/daughter chat. The 2003 publication of Secret Girls’ Business was a joint effort by Fay Angelo – an assistant principle, pupil welfare coordinator and teacher; Heather Anderson – a sexual and reproductive health nurse and sexuality educator; Rose Stewart – a teacher and child psychologist; Julie Davey – a nurse, now author, illustrator and publisher.

Christine @Voices Under the Sun found the book to be ‘intelligent and delightful….Packed with helpful advice and many funny colourful illustrations, the book discusses puberty and its many implications in a friendly, loving manner and with a huge sense of humour.’

In other news this month, the Australian Book Industry Awards (ABIA) were announced. A number of Australian women writers were recognised for their efforts on the night, including, in the non-fiction areas:

An interesting new release from Scribe Publishing that is part memoir and part cultural critique is Briohny Doyle’s Adult Fantasy.

Briohny Doyle turned thirty without a clear idea of what her adult life should look like. The world she lived in, with its global economic uncertainty, political conservatism, and precarious employment conditions, didn’t match the one her parents grew up in. Every day she read editorials about how her millennial cohort — dubbed the ‘Peter Pan generation’ — were reluctant to embrace the traditional markers of adulthood: a stable job, a house in the suburbs, a nuclear family.

But do these emblems of maturity mean the same thing today as they did thirty years ago? In a smart and spirited enquiry, Doyle examines whether millennials are redefining what it means to be an adult today. Blending personal essay and cultural critique, she ventures into the big claims of philosophy and the neon buzz of pop culture to ask: in a rapidly changing world, do the so-called adult milestones distract us from other measures of maturity? From NewSouth Publishing we have Beautiful Balts: From Displaced Persons to New Australians by Jayne Persian.

Australia’s first immigration minister, Arthur Calwell, scoured post-war Europe for refugees, Displaced Persons he characterised as ‘Beautiful Balts’. Amid the hierarchies of the White Australia Policy, the tensions of the Cold War and the national need for labour, these people would transform not only Australia’s immigration policy, but the country itself.

Beautiful Balts tells the extraordinary story of these Displaced Persons. It traces their journey from the chaotic camps of Europe after World War II to a new life in a land of opportunity where prejudice, parochialism, and strident anti-communism were rife. Drawing from archives, oral history interviews and literature generated by the Displaced Persons themselves, Persian investigates who they really were, why Australia wanted them and what they experienced. And finally, Beyond Veiled Cliches: The Real Lives of Arab Women by Amal Awad published by Random House.

As someone who has a foot in both the Western and Arabic worlds, Amal set out to explore the lives of Arab women, in Australia and the Middle East, travelling to the region and interviewing more than sixty women about feminism, intimacy, love, sex and shame, trauma, war, religion and culture.

Beyond Veiled Clichés explores the similarities and differences experienced by these women in their daily lives – work, relationships, home and family life, friendships, the communities they live in, and more. Arab-Australian women are at the intersection – between Western ideals and Arab tradition. It can get messy, but there is also great beauty in the layers.

In a time of racial tension and rising global fear around terrorism, there is a renewed fear of ‘the other’. At its heart this fascinating book normalises people and their experiences. The breadth, variety and beauty of what Amal has discovered will enthral and surprise you. What non-fiction have you been reading this month?