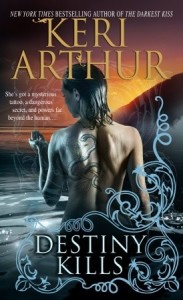 Welcome, intrepid readers, to a look at another subgenre falling under the broad speculative fiction umbrella. This month  I will be focussing on urban fantasy and paranormal romance. I’ve lumped them together for two reasons: one, there is a lot of cross over between the two, depending on definitions, and two, they are not subgenres that I, personally, read very regularly and I feel less equiped to discuss nuances. The good news is that urban fantasy (UF) and paranormal romance (pararom) are very popular among AWW participants and if you miss my old round-ups from yesteryear, then this post will be a bit more along those lines. Since there have been quite a few UF/pararom books reviewed even in just the first five months of this year, I’m going to highlight a few and then list some others at the end of the post. One of the most popular Australian authors of UF/pararom is Keri Arthur, who is also popular overseas. This year, catsalive has written some quick reviews of the first two books of Arthur’s Myth and Magic series: Destiny Kills and Mercy Burns. Many other Keri Arthur books have been reviewed by AWW participants over the years.

Kylie Chan writes urban fantasy with Asian mythological themes and her first series, the Dark Heavens Trilogy, follows an Australian woman who lives in Hong Kong, a very urban environment. Christine Sun reviewed the whole trilogy for us and looks forward to reading Chan’s other trilogies which, I believe, follow the same characters. Traci Harding has written across genres, sometimes combining fantasy and science fiction in the one series. Among those books are some paranormal romance stories such as The Immortal Bind, which follows soulmates through different past lives. It was very favourably reviewed by Bree @1girl2manybooks and Tien @Tien’s Blurb. And, of course, a lot of other UF/pararom books were reviewed by AWW participants this year. Here are some more with reviews you might want to have a look at:

And, actually, that’s skipping over all the pararom books in particular that get tagged as “romance” rather than “spec fic” when reviewers add them to our database. If a book has never been tagged as spec fic, it won’t show up when I search for spec fic. So I know I’ve skipped several books that should be on the above list. Did I miss your favourite? Let me know in the comments!