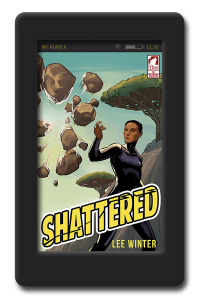 Today we feature Lee Winter, whose speculative fiction book Shattered (Ylva) was released this week. Welcome, Lee, and thanks for participating in Sunday Spotlight.

What is your favourite character from one of your books and why?
Requiem, aka Natalya Tsvetnenko, from Requiem for Immortals, my second book. She is a professional cellist who fills the souls of patrons by night with beauty while also being a freelance contract killer for Victoria’s underworld. She has such a clean focus – her thoughts for music and assassination are so pure and clear to her, that she is compelling. Of course, her uncluttered mind doesn’t stay that way, so watching her ordered world begin to crumble around her in the face of an innocent she’s hired to kill was all sorts of fun. I wondered one day whether a superhero ever suffers from PTSD. Or whether they ever get sick of us with all our petty issues about things that shouldn’t matter at all – why do we kill or hate over race, religion, sexuality, nationality? From an evolved outsider’s perspective we must be pathetic as a species. So I was inspired to ask: What happens when a superhero refuses to “hero”? What happens if it’s because she decides we’re just not worthy?

I also was greatly inspired by the otherworldliness of the alien-looking archipelago of Socotra, near Yemen, with strange dragon blood trees and odd endemic species. So I sent my hero there to go off the grid and ignore our foibles and failings in peace.

What genre would you like to try your hand at writing and why?
All of them. I have been systematically working my way through every genre. The only exception will be horror, because I can’t write from under a bed. So far I have done mystery, crime noir and now speculative is my latest. Next up will be a romance, although the plot’s turning out kind of twisty so I doubt it will be a typical love story.

What would you like to tell your young(er) self before she starts out as a writer?
That writing is a cruel, horrid and wicked beast, like a child who has a lot of tantrums and refuses to play well with others. But that the payoff of a sweet little angel at the end is so delicious and heady that all will be forgiven when you forget the tanties and decide to create another life. I’d add that I should not lose faith or think of giving up. That it’s worth it.

If you could go back in time for a year, which historical era would you choose to live in and why?
I can’t give a glib answer. My mother died too soon, at age 52. So I would go back and spend the last year of her life with her, not two states away. I’d sit on the beach with her at Perth’s Cottesloe and watch lots of sunsets and ask her the important things: What matters to her? What are her loves and regrets? Why does she believe in an afterlife but not God? And, vitally, what was the recipe for that divine cheesy fondue I haven’t been able to replicate?

How many novels have you written and published and what prizes, if any, have they won?
Shattered is my soon-to-be released third novel. My first one, The Red Files, won a Best Mystery Golden Crown Literary Award in 2016 and was a finalist in the LAMBDA Awards.

Thanks, Lee, and good luck with your book.

Shattergirl, Earth’s first lesbian guardian—a brilliant but aloof alien superheroine who can hurl and destroy large objects—is refusing to save people and has gone off the grid. Lena Martin, the street-smart tracker with a silver tongue and a disdain for the rogue guardians she chases, has only days to bring her home. As the pair clash heatedly, masks begin to crack and brutal secrets are exposed that could shatter them both. About: Lee Winter is an award-winning veteran newspaper journalist who has lived in almost every Australian state, covering courts, crime, news, features and humour writing. Now a full-time author and part-time editor, Lee is also a 2015 Lambda Literary Award finalist and Golden Crown Literary Award winner. She lives in Western Australia with her long-time girlfriend, where she spends much time ruminating on her garden, US politics, and shiny, new gadgets. Lee can be found via her website, on Twitter and on Facebook.