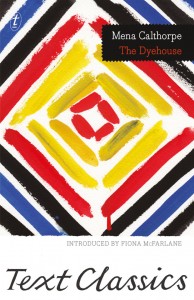 June is generally a quieter month on the literary awards calendar as we southern-hemisphereans hunker down for winter, but that doesn’t mean we’ve not been reading. I must say, I’ve never quite understood the beach read thing? Surely winter is prime reading time?

Now, I apologise in advance for this month’s more cursory roundup. I’m travelling in the USA for the month, and finding keeping up with my blog responsibilities, together with reliable internet access, a bit of a challenge, but I’ll do my best. Normal service will return next month!

We had another good bunch of reviews this month, at 56, if I’ve counted correctly. We are close, in fact, to equalling last year’s annual figure. I don’t know what’s in the water, but do keep drinking it!

Two classics were reviewed this month, one fiction and the other non-fiction. I’ll start with the fiction which was Text Publishing’s pick last year for its 100th Text Classic. The book is Mena Calthorpe’s social realist style novel, The dyehouse. Set in the dyehouse of a textile company in the early 1950s, the book chronicles the lives of the workers and management, exposing the lack of power and job security experienced by the workers. Reviewer Calzean notes that “the great class divide of “staff” and “employees” exists”.

This book does not contain the greatest writing but for it’s historical picture of the impact of new technology, new management ideas and working conditions in Sydney 1950s, this is a gem of a book.

The other classic comes from turn of the century English-born Victorian writer Ada Cambridge, who wrote many novels during her career. However, this month Calzean (again) reviewed her memoir, Thirty years in Australia. Calzean (again) likes how Cambridge compares her expectations with what she found, though she says the book is a little dry:

Cambridge’s memoirs are a bit dry but do give an interesting looking glass into life in the North of Victoria in the late 1800s.

Last month I looked at how genre fits into the Literary category, so decided this month to look at a very specific genre, which often find its way here, Cli-fi or Climate fiction.

If you haven’t come across this term before, here is Wikipedia’s definition: “literature that deals with climate change and global warming. Not necessarily speculative in nature, works of cli-fi may take place in the world as we know it or in the near future.”  While it is often seen as a subset of speculative fiction (or Sci-fi) it is often, as Wikipedia implies, set closer to the time it is written than sci-fi often is. It can also be dystopian in nature. However, not all Cli-fi fits the speculative or dystopian camp, as it  can also be more realistic that these.

We have had several Cli-fi books reviewed in the past – including Jane Rawson’s A wrong turn at the Office of Unmade Lists, Alice Robinson’s Anchor point, and Annabel Smith’s The ark (reviews for which you can find via our Books Reviewed search on the homepage). However, this month sees a new one, Sally Abbott’s Closing down, and it was reviewed twice.

Closing Down is a really interesting work of “cli-fi”. Set in the near future, it imagines a world that is struggling with the effects of climate change, and the social, political and economic difficulties associated with it. […] For me, though, it was the dystopian future that held the most interest. Abbott has created a world where the north and west of Australia are being closed, forcibly and permanently evacuated.

This is one of those novels which is best read, not explained. …. It’s imaginative, and disturbingly possible. This is Ms Abbott’s debut novel, and won the inaugural Richell Prize for Emerging Writers in 2015.

The new and the old

For reasons of expediency, I’m just going to point you to a couple of other reviews, one for a recent book, and one for an older one.

Our most reviewed book for the month, Eliza Henry-Jones’ Ache, was published this year, and was reviewed by Michelle (of Beauty and Lace Bookclub), Cass Moriarty, and Jennifer Cameron-Smith. Michelle enjoyed it, explaining its background thus:

Henry-Jones has a background in grief, loss and trauma counselling which, I think, adds weight and depth to the situations she tackles in he writing. Ache is a story of rebuilding after a devastating bushfire but it’s about more than rebuilding homes and the town; it’s about rebuilding people, families and relationships as well.

By contrast, Debbie Robson reviewed one of Susan Johnson’s backlist books, Flying lessons. It was first published in 1990 and, as Debbie says, was shortlisted for the Victorian Premier’s Prize in 1990. Debbie loved the book. It’s one of those stories with two time-lines, a past and a present: the 1920s in which Emma James falls in love with the son of an Italian immigrant, and the 1980s when her granddaughter Ria leaves Sydney without a trace. Debbie was impressed with Johnson’s handling of these, believing it to have been “cutting edge” when it was written. She concludes her review with:

I love the juxtaposition of the storylines, particularly towards the end when the full extent of what families do to each other is revealed; how character traits can skip a generation and how what we are not told can sometimes be more important than what we are told.

Johnson is one of our more prolific writers but always makes for a great read. Worth checking out if you haven’t before.

For all new releases, please check our dedicated page, but this month’s new books this include two short story collections:

We have no advanced reviews for these authors yet, but they will hopefully be reviewed soon.