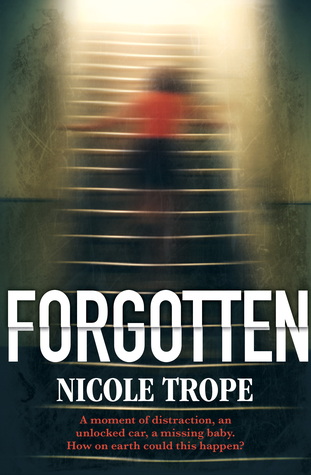 Today we feature Nicole Trope whose most recent release is Forgotten (Allen & Unwin). Welcome, Nicole, and thanks for participating in Sunday Spotlight. I cannot point to any one inspiration for this story but I can tell you that it appeared all at once in the shower and I stood stock still under the water while the story played out in my mind. I had a vision of someone holding a baby and walking very quickly along a busy street and in an instant the novel was there.

Describe your work space
I work up in the loft of my house on a dreadful old glass desk. I put my computer on my lap more often than I should, leading to back problems and long lectures from my chiropractor. It is too hot in summer and too cold in winter but it is the space where I create so I wouldn’t want to change it.

What do you like to do when you’re not writing (work and/or play)?
My husband owns a wholesale furniture business and I help out with that on and off throughout the year. Any free time I have is spent reading and I love a good television series-everything from Call the Midwife to Game of Thrones. Of course I have three children so never get through an hour of television or an hour of reading without many delightful interruptions. The ability to pause and record television has changed my life even if it takes me all night to get through something that requires forty-five minutes actual viewing time.

If you could walk through a door into another realm, describe the universe you’d choose to visit.
Without question I would visit the Discworld created by Terry Pratchett.

Lamingtons or pavlova?
Lamingtons – it’s cake and chocolate and – even though mine would need to be gluten free – what could be better?

Thanks, Nicole, and good luck with your book.

In a single day, a simple mistake will have life-altering consequences for everyone involved. A moment of distraction, an unlocked car and a missing baby. How on earth could this happen? All Malia needed was a single litre of milk and now she’s surrounded by police and Zach has disappeared. Detective Ali Greenberg knows that this is not the best case for her, not with her history – but she of all people knows what Malia is going through and what is at stake. Edna is worried about the new residents at the boarding house. She knows Mary would turn in her grave if she knew the kinds of people her son was letting in. And then there is someone else. Someone whose heart is broken. Someone who feels she has been unfairly punished for her mistakes. Someone who wants what she can’t have. About: Nicole Trope went to university to study Law but realised her error when a professor commented on her essay, ‘It’s not meant to be a story.’ She studied teaching instead and used her holidays to work on her writing career and complete a Masters’ degree in Children’s Literature. After the birth of her first child she stayed home full time to write and raise children, renovate houses and build a business with her husband.