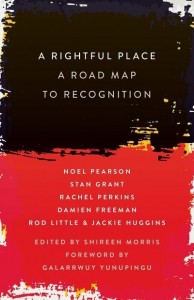 Non-fiction reviewing has been a bit light on of late, so I thought I would take the time this month to highlight some new releases to tempt us and excite us about the fabulous, diverse non-fiction options out there right now!

The nation has unfinished business. After more than two centuries, can a rightful place be found for Australia’s original peoples?

Soon we will all decide if and how Indigenous Australians will be recognised in the Constitution. In this essential book, several leading writers and thinkers provide a road map to recognition.

Starting with the Uluru Statement from the Heart, these eloquent essays show what constitutional recognition means, and what it could make possible: a political voice, a fairer relationship and a renewed appreciation of an ancient culture. With remarkable clarity and power, they traverse law, history and culture to map the path to change. In this revealingly honest collection, successful Australian women talk about the challenges they have overcome, from sexual assault and domestic violence to racism, miscarriage, depression and loss, and how they let the past go to move forward with their lives. Courageously, the contributors delve deep into how these experiences made them feel, what the personal cost was and why they may have chosen to remain quiet until now.
In a time when bragging about sexual assault doesn’t preclude being elected President of the United States, women must stand together and speak out against violence against women. Unbreakable shows that every woman, no matter her success, has a story, and that together we are stronger.
In Jane Caro’s words:
‘ I want to pass on courage and hope to women who have also gone through such things by all of us speaking up about our own experiences. These things do not need to either define us or destroy us. We can find the strength to move  forward, and this book shows how successful women have done just that.’
Jane Caro has brought together an impressive array of contributors (including Kathy Lette, Mariam Veiszadeh, Tracey Spicer, Lee-Ann Tjunypa Buckskin, Rebecca Lim, Kerryn Goldsworthy, Susan Wyndham, Andie Fox, Dee Madigan, Catherine Fox, Zora Simic, Nina Funnell, Sandra Levy, Polly Dunning and Jacinda Woodhead, with a foreword by Tanya Plibersek) in her latest collection titled Unbreakable: Women Share Stories of Resilience and Hope. Published by UQP in August. Published in June by Text Publishing, Kate Cole-Adams’ Anaethesia: The Gift of Oblivion and the Mystery of Consciousness brings science to the masses.

You know how it is when you go under. The jab, the countdown, the- -and then you wake.

This book is about what happens in between.

Until a hundred and seventy years ago many people chose death over the ordeal of surgery. Now hundreds of thousands undergo operations every day. Anaesthesia has made it possible.
But how much do we really know about what happens to us on the operating table? Can we hear what’s going on around us? Is pain still pain if we are not awake to feel it, or don’t remember it afterwards? How does the unconscious mind deal with the body’s experience of being cut open and ransacked? And how can we help ourselves through it?
Haunting, lyrical, sometimes shattering, Anaesthesia leavens science with personal experience to bring an intensely human curiosity to the unknowable realm beyond consciousness. For something completely different, Helen Razer and Allen & Unwin bring us Total Propaganda: Basic Marxist Brainwashing For the Angry and the Young in September.

Marxism and socialism explained for a younger readershipMillennials have it bad. In 2017, they face the problems of underemployment, unaffordable housing and economists who write crap columns telling them that it’s their fault for taking an Uber to brunch.

Today, the future’s so dark, we need night vision goggles, not a few liberal guys shining a torch on a sandwich. Maybe today, we could use the light of Karl Marx.

Marx may not have had much to say about brunch in the twenty-first century, but he sure had some powerful thoughts about where the system of capitalism would land us. Over time, it would produce a series of crises, he said, before pushing the wealth so decisively up, a top-heavy system would come crashing down with a push.

Pushy old communist Helen Razer offers an introduction to the thought of Marx for Millennials, and anyone else tired of wage stagnation, growing global poverty and economists writing desperate columns saying everything would work better, if only we stopped eating sandwiches.

Brunchers of the world must unite! They have nothing to lose but a life lived for the wealth of a few. Both for themselves and their comrades in the Global South, they have a world to win. If environmental issues are more you cup of tea, then Noelle Janaczewska’s latest book, The Book of Thistles (due to be published in October by UWA Publishing) might be the nonfiction book you’ve been waiting for.

Some plants have sustained empires and sparked wars. Some have ignited public outrage. Think tea, opium, tulips – and thistles.

The word ‘thistle’ refers to a large and widespread group of plants. Several hundred species within the Asteraceae family, plus a bunch of other plants we call thistles – even though technically, botanically, they’re not. Google ‘thistles’ and many of the sites will tell you how to get rid of them. Dig a little deeper, however, and from this weedy territory other narratives begin to emerge.

Part accidental memoir, part environmental history and part exploration of the performative voice on the page, The Book of Thistles is about the cultural and social life of this group of plants we call thistles. If you’d rather write your own non-fiction than read somebody else’s, then perhaps Scribe Publishing’s Nonfiction Prize for Young Writers is for you! Submissions close on the 10th September. For more information, visit their insights page here.

What non-fiction have you been reading this month?

N.B. Please remember to leave a valid working link to your blog or goodreads review, if you’d like us to read what you have written.