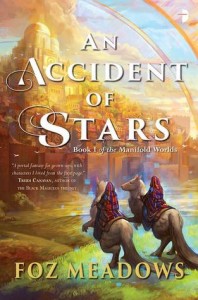 Even if you’re not an avid fantasy reader, chances are you’ve read or watched a portal fantasy book or movie. There’s a pretty good chance that it was the most famous international example of the subgenre: The Chronicles of Narnia, in which a group of siblings enter a wardrobe and come out in another world. It is portals — be they blatantly glittering rings or disguised as wardrobes — and the passage to other world which defines the portal fantasy subgenre. And there are some great portal fantasy books written by Australian women if you want to explore the genre further. The beauty of a portal fantasy is that it can start off in the real world and end up pretty much anywhere. Take the recently released duology by Foz Meadows, which stars with An Accident of Stars and concludes with A Tyranny of Queens. As well as following a teenaged Melbournian girl as she wanders through a portal into a low tech but magical world, it also follows a middle-aged portal traveller, who has had a lifetime to balance her life between family on Earth and loved ones on the other side of the portal. An interesting take on a genre dominated by youthful protagonists. You can read Ju Transcendancing’s review of An Accident of Stars, or my review of A Tyranny of Queens.

Speaking of youthful protagonists, HM Waugh reviewed Eve and the Runaway Unicorn by Jess Black, which is a book for younger readers and the start of a four book series. The portal element comes about from a forbidden trip to grandmother’s attic and a mysterious artefact… Jumping back up to more mature YA, Jaclyn Moriarty’s The Colours of Madeline series has garnered quite a few AWW-linked reviews since the first book came out a few years ago and the first book, A Corner of White, is probably the most popular Australian-authored portal fantasy in recent years. Among others, Emily A Keyboard and an Open Mind reviewed A Corner of White, the second book, Cracks in the Kingdom, was reviewed by Shaheen @ Speculating On Specfic and the concluding volume, A Tangle of Gold, was reviewed by Cassandra Page.

Jennifer Fallon is an author who is better known for her epic fantasy, but she has also dipped her toe into the realms of portal fantasy. Her Rift Runners trilogy takes the reader between modern Ireland and (most of the time) a Celtic-inspired magical world. But there’s also a ninja magic world and a few others. Here’s Speculatef‘s review of the first book, The Undivided. A more overlooked portal fantasy book is Destiny of the Light by Louise Cusack. It’s the first of a series that takes a modern Australian woman and throws her into a fantasy world in which there are no animals and everyone is perforce vegetarian. Here’s my review of the first book, but unfortunately the rest of the series has not yet been reviewed for AWW. And to finish on a slightly different note, this next series is half portal fantasy and half portal science fiction… but it’s full of magical psychic powers, despite the science fictional vibe, which is why I’m including it in this list. I am, of course, talking about the Touchstone trilogy (well, trilogy + 2 bonus books) by Andrea K Höst. It follows a Sydney girl as she steps into a portal on the way home from school and finds herself on another planet. And almost dies alone in the wilderness before being rescued by aliens. Here’s Leonie Rogers‘s review of the first book, Stray.

What are some of your favourite portal fantasies? Are there any by Aussie women that I’ve overlooked? Let me know in the comments!