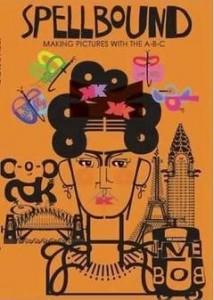 I have been on a search recently to uncover great books by Australian women that are either self-published or published by a small press. I have to say, this has been an enjoyable experience; there really are some wonderful books out there that may not have necessarily received the attention they deserve. Occasionally though, they do, which is nice to see – like Spellbound: Making Pictures with the A-B-C by Maree Coote – which was shortlisted for the 2017 Children’s Book Council of Australia Awards. From ABC’s to bums, polar bears and children’s poems, I am sure many young readers would enjoy any of the wonderful books below.

Maree Coote is an award-winning writer, artist, photographer and independent publisher who has a passion for her hometown, Melbourne, which led her to publishing her first book in 1995, The Melbourne Book: A History of Now. Now in its fourth edition, it won the 2015 Independent Publisher Book Award Gold for Best Regional Non-Fiction. More books followed and in 2013, Maree added her first children’s book to her portfolio, When You Go To Melbourne, followed by Letters From Melbourne and Alphabet City Zoo, using a form of visual poetry ‘…where the letters that spell the subject are used to create the image.’

In 2016, Maree launched Spellbound: Making Pictures with the A-B-C which not only received a Special Mention in the 2017 Bologna Children’s Book Fair Ragazzi Award, but has been shortlisted for the 2017 Children’s Book Council of Australia Eve Pownall Award for Information Books.

Emily Larkin is an Australian author based in Queensland. Her short stories have featured in Meniscus, Seizure, and The Zodiac Review. Her first illustrated book, The Whirlpool, has recently been launched by Wombat Books.

Emily says the story ‘…traces a polar bear cub’s journey through the highs and lows of life, and depicts how his perspective is coloured by emotion. The narrative uses symbolic language and imagery to reflect that despair may be followed by the return of hope.’

Claudia Rowe is a writer, illustrator, and the creator of Atlas Jones & Co, a small publishing company in Castlemaine, Victoria. Her picture books Bum Magic, The Very Hungry Bum, and Where the Wild Bums Are, parodies of some other very popular children’s books, are available from many book sellers around Australia. According to Celia at Shorties bookstore in Newtown, The Very Hungry Bum delights readers young and old.

Bum Magic: Like two famous possums, Grandpa Bum and little Flush live in the Australian bush. Grandpa Bum dabbles in bush magic and has made Flush invisible. But when he can’t find a spell to make Flush seen again, they set off to find a magical cure in some unlikely underpants.

June Perkins is a poet, writer, photographer, and independent publisher at Gumbootspearlz Press, as well as a winner of an Australian Society of Authors Emerging Writing Mentorship.

Her full-colour illustrated collection of poems, Magic Fish Dreaming, is described by Georgina Ballantine on Goodreads as ‘a magical collection of seventeen poems, bursting with the joy, curiosity and wonder of children as they explore the Australian landscape of Far North Queensland.’