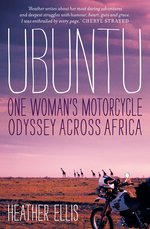 Some of these reviews focussed on books that have garnered quite a bit of attention over the year. Anna Greenwood added her review to those already posted for Maxine Beneba Clarke’s The Hate Race, finding it “a powerful, well-written” read that was “almost a five star book for me” (review here). Calzean reviewed Kim Mahood’s Position Doubtful, which has also attracted several reviews, writing that “[t]he book wobbles along at times describing the mundane but then wham- some story, some person, something happens” (review here). Two memoirs drawing on women’s zest for adventure in foreign countries were reviewed during the month. Heather Ellis’ book Ubuntu: One Woman’s Motorcycle Odyssey Across Africa is based on the diary she kept while crossing Africa on the back of a motorbike. As Calzean said in her review:

This is not a travel writers book which looks at depth into the soul of Africa. Rather it is about an incredible achievement and the people who helped along the way. (Review here)

Journalist and screenwriter Sheridan Jobbins was propelled into undertaking her own adventure after returning from a trip and discovering her husband of eleven years in bed with another woman. After “therapeutically smashing all their defective crockery”, she embarked on a trip across America in a red Chevvy Camaro that she named ‘Betty’. In her review of Wish You Were Here, Carolyn Scott wrote:

Filled with lots of humorous anecdotes and interesting people, Sheridan likes nothing better than to get off the beaten track and discover the quirky and unusual…  (review here) Other memoirs had a more serious edge.  Mojgan Shamsalipoor’s memoir Under the Same Sky tells the story of the author’s life in Iran with her mother and siblings. After a happy childhood, things changed during her teenage years as her mother re-married, ostensibly to give Mojgan at better life. She and her brother eventually fled to Australia, with the blessing of their mother, with hopes of a better life. Brenda reviewed this book, noting that:

Under the Same Sky is a traumatic, emotional and heartbreaking look at the fight for freedom by the Shamsalipoor siblings; also, the compassion and kindness of strangers who found themselves in the paths of these two young people. (review here) Mary-Rose MacColl’s memoir For a Girl: A True Story of Secrets, Motherhood and Hope does not travel geographically, but emotionally, as a woman struggles to reclaim and make sense of her past relationship with her teacher and her husband and the overwhelming consequences for the rest of her life. In her thoughtful review, Cass Moriarty wrote:

I cannot imagine how difficult it was to write this book.The pain, the (misplaced) guilt, the self-loathing, the misunderstandings, the yearning to go back and do it again, but differently – all of this is laid bare; it is raw, frank, searching and grim. And yet, somehow, it is also a hopeful story, one hopes a cathartic story, that seeks through its telling to exonerate the innocent from that misplaced guilt, and to offer to all of those affected some notion of peace. It is not a bitter book, nor vengeful, and is extraordinarily balanced. It is well-written and heartrending and sad. (review here) An array of ‘Girls’ are discussed in Susan Gearson’s book Great Australian Girls: and the Remarkable Women They Became, reviewed by Bill Holloway. It’s an older book (1999) and may not be readily available.  Bill wrote in his review:

This 1999 book is a collection of biographical sketches of Australian women who shared “qualities like courage and determination, the strength to face adversity and obstacles and still fight on.” The idea of course, although Geason does not say so in her short Introduction, is to provide positive role models for girls when our histories, and the daily press, are so full of role models for boys….As you might expect, the older stories are of more interest to me, some of the later stories might have been articles in the Women’s Weekly. (review here)

Two of the reviews during August dealt with women writers. Janine Rizzetti reviewed Bernadette Brennan’s A Writing Life: Helen Garner and Her Work. As she pointed out in her review, “This book is exactly what the title promises: a study of Helen Garner and her work. It’s not, and nor does it purport to be, a full biography but is instead a ‘literary portrait’, firmly based on and in Garner’s own writings and writing practices.” On finishing the book, Janine wrote:

Most of all, though, I am left with a sense of the writer at work– and work it surely is. The reading, the thinking, the writing and rewriting, rewriting, rewriting….The richness and texture of thought and reflection. The edginess and vulnerability of putting yourself out there as an author. The web of connections between people in the local intellectual and literary scene. A life lived in the mind, but also in the everyday. A particular way of looking. All the things that I appreciate most in Garner’s work. (review here)

Finally, Brona  decided to read two books about Australian author Joan Lindsay at the same time. Lindsay’s memoir, Time Without Clocks was written in 1962, before her most famous work Picnic at Hanging Rock was even conceived. As Brona noted:

She was writing about her marriage, their homes and their many famous, accomplished family and friends before she was famous herself. It was a fascinating reflection of life in Melbourne during the twenties and thirties….There were moments throughout Time Without Clocks when Joan came across as being rather snobbish and conservative. She often expressed her discontent with modern life, preferring the more genteel time of the Edwardians, yet she also prided herself on breaking with the patterns of a normal life. Like most of us, Joan proved to be a fascinating mixture of contrary self-beliefs. “Hoping for a more rigorous in-depth exploration of the story and its author” Brona then turned to Janelle McCulloch’s recently published biography of Joan Lindsay titled Beyond the Rock. Brona’s hopes were not fulfilled:

When I pick up a biography I expect to gain fresh psychological insight into the chosen subject as well as being utterly saturated in the detailed facts of their life and times. Neither happened….I really wanted to be wowed by this book, but at best this light-weight biography was easy entertainment in a pretty package. (joint review of both books here)

And so ends August. I’m off to read my ‘history’ book, in order to finish it this month, so that I can fly the flag in the History, Memoir and Biography round-up in September!

About me: I’m Janine Rizzetti and I blog at the immodestly-named The Resident Judge of Port Phillip where I indulge my love of reading, history and seeing films and exhibitions just before they close. I am a historian, interested in Australian and colonial history, officially retired but more occupied than I thought I would be with my local historical society and learning Spanish.