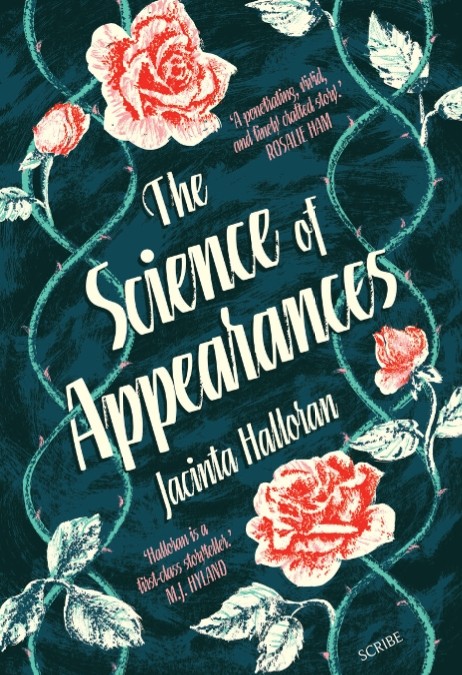 A little while ago, I speculatively turned up to a book event as part of the Woodend Winter’s Arts Festival. Since we’d arrived in Woodend, I’d been having an internal debate about whether to buy a ticket to this event. To go, I’d have to get up earlier than I’d like (on a holiday weekend no less) and face a cold, foggy morning (being winter and all). Plus, I hadn’t heard of the author. In the end, of course I decided to forgo the extra sleep and I headed into Woodend to listen to Jacinta Halloran. I’m so glad I did. The more Jacinta talked about her books and her writing that morning, the more I warmed to her – she was articulate and thoughtful and with three books under her belt (Dissection, Pilgrimage and The Science of Appearances) she obviously knew what she was talking about. What struck me most about Jacinta was that, as well as being an accomplished author, she is also a GP and still practises part time. What an extraordinary brain she must have, I kept thinking, to do science-y things and also do creative, art-y things.

After this introduction to the author and her books, what else could I do but take one of her novels home with me? I chose The Science of Appearances which is set in the 1950s in regional Victoria (not far from Woodend actually). The novel centres Dominic and Mary who are twins, but who have very different personalities. Dom is studious and loyal, Mary is passionate and impetuous. Eventually both quit their small home town to pursue their ambitions. Dom enrols at Melbourne University to do a Botany degree, which includes a course on the fast-changing field of genetics. Meanwhile, Mary runs away and deliberately covers her tracks so that neither her mum nor Dom can find her. Mary finds solace in art, mixing with artists and art students in St Kilda. The novel is about their independent journeys, but also about the strong linkages that bind these siblings together.
Because Jacinta is such a generous person, she agreed to chat with me about The Science of Appearances (and many other things, in the end). How lucky was I? A customised introduction to the book by the author, and then a post-reading debrief with her as well!

Art versus science
This symbiotic relationship between science and art was the first thing I wanted to talk about with Jacinta; it’s a key theme in The Science of Appearance and I can’t think of a novel that links the two so strongly. It’s obviously something Jacinta is happy to discuss. ‘There is actually a lot of narrative in science. When I was researching the history of the discovery of DNA for this book, the stories of the scientists jumped out at me. A lot of the scientists involved were refugees from the second world war and they ended up fleeing Europe and going to America and the UK. Their stories of personal endeavour and what was going on in their private life really influenced their science. There’s an idea that science is very dry and very technical, but when you read the stories of the actual scientists and how they got to achieve what they did, you can appreciate there is an incredible human narrative’. Jacinta goes on to explain how this moment of scientific discovery shaped the story around Dom and Mary. ‘Like the double helix, I realised very early on that the two strands of the narrative would be the narratives of the twins and that they would be intersecting and pulling apart a little bit. They do spend a lot of time apart in the novel but their journeys are overlapping. Their lives are still intersecting although they aren’t physically intersecting’.

Acts of benevolence
Over the course of the novel, both Dom and Mary are the recipients of quite generous acts of benevolence. When I read these chapters, I wondered if this generosity was more believable because it took place in the 1950s. Surely people don’t look after others in the same way now?, I pondered. Luckily, there are people who have much more faith in the human condition than I do, including Jacinta. ‘I don’t think it’s of the time. I think people still do things like that; extraordinary acts of generosity. You can have grand gestures in a novel, more so than in real life. But I do think there are incredibly generous people out there. I work now in mental health; I see adolescents who are struggling and are sometimes kicked out of home and people take them in and become their pseudo parents. I’m amazed at what people do. Especially when young people need a mentor, and if the mentors can’t be their parents, I think that other people do step up.’

Growing up Catholic
Yet, it’s not all sunshine and roses for Dom and Mary. The novel strongly evokes the stifling environment of the 1950s, particularly in a small country town, where everyone knows each other’s business, emotions aren’t acknowledged let alone discussed, and family secrets are tightly guarded. In this context, Catholicism has a strong hold over many of the characters and I ask Jacinta about her Catholic upbringing. ‘My parents weren’t deeply religious but we went to Catholic schools and Sunday mass and all that. There certainly wasn’t a lot of religious oppression within my household. However, I could imagine it because I saw enough of it in my primary school – we had the Presentation Sisters and they were very strict, so I could just imagine how it had been. For my father’s generation and his family, religion had been a more oppressive thing for them. It’s easy to imagine that strictness, where you can’t say what you really think and you have to follow the rules, particularly for young girls. It was very easy for me to create that world in the novel’.

The gorgeous book cover
In addition to being a great story, The Science of Appearances has a beautiful cover – it’s adorned with pale pink, embossed roses and a subtle double helix rises from their stems. Jacinta tell me that the talented designer, Allison Colpoys, created the cover. ‘The brief for her was – the book is set in the 50s, it covers a duality of art and science and also the discovery of the double helix. For me, it was really important that there were roses on the cover; it’s Mary’s motif. Allison did a really amazing job’. Victorian Premier’s Literary Award
I was really keen to know more about that moment when Jacinta found out she’d been shortlisted for the Victorian Premier’s Literary Award for an Unpublished Manuscript for her first novel Dissection. ‘I didn’t win it’, she clarifies quickly, ‘But that didn’t really matter in the end except that I didn’t get the money! It was a turning point for me, no doubt. I’d actually been saying to some friends, about the week before I got the phone call, it’s good that I wrote this novel as it’s taught me a lot, but now I’ll put it in the bottom drawer and start another one. And then the next week, I got a phone call saying I’d been shortlisted for the Premier’s Award. I just thought that someone was taking the mickey. But it really was true; it was incredible! Then once it was announced, a few publishers wanted to look at the manuscript. It was Scribe who took it up and I’ve stayed with Scribe. They’ve been great publishers, very supportive. That shortlisting was incredibly fortunate for me’.

Currently reading
What does a thrice published author have sitting on her bedside table? ‘Poor Fellow My Country by Xavier Herbert’, Jacinta advises. ‘Xavier Herbert was an Australian novelist and he wrote a lot about Aboriginal Australia, although he was white. This book won the Miles Franklin Award in 1975 and is one of those classic Australian texts. I’m also reading Lincoln in the Bardo. It’s very unconventional. For a writer to read something like that, it’s such a shot in the arm. This writer has gone for broke, he’s thrown out the rule book and he’s just doing what he wants to do. And it works. It just goes to show you should never feel hampered by anything; you should follow your instincts. Make everything 100 times bolder than you think you can manage. It’s completely left of centre; it’s quite amazing’.

What’s next?
Naturally, I’m dying to know when we can expect our next Halloran novel. ‘I’ve been a little bit slow to start on the next book. But I’m heading towards something. It will be an unusual narrative, maybe two families coinciding. It will probably again have something to do with my work, and it will have a story within a story’.

To tea, or not to tea?
And of course, I have to ask about Jacinta’s tea drinking habits; we ended up having a good chat about our tea predilections. ‘I really enjoy my tea, so I’m happy to talk about that!’, she tells me. ‘I like loose leaf tea, but I’m often to slack to make it. So, I use Twinings Assam Bold, which is pretty strong. And then when I’ve had too much of that, I will go for a Rooibos. There is a little bulk grocer up the road, and I bought some loose-leaf Rooibos from there. It made a really nice, strong tea, but it has no caffeine which is a great win!’.