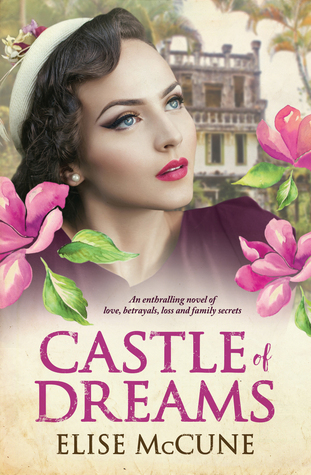 Welcome to Sunday Spotlight. Today our guest is Elise McCune, author of the historical fiction novel, Castle of Dreams. When did you start writing and what was the catalyst?
I have always written but when my children were small it was mainly short stories. The catalyst to write was that I was a reader first and from my love of reading I became a writer.

How has being Australian AND a woman impacted on your writing and/or writing career?
I am drawn to the beautiful landscapes of Australia and write about them so this impacted on my writing. Being a woman didn’t make any difference to my career.

What authors and types of books do you love the most?
I enjoy reading time-split novels with family secrets, mystery, and romance. I also read novels from the past like The Woman in White and Jane Eyre and novels by Kate Mosse and Pat Barker. My favourite book last year was Salt Creek by Lucy Treloar.

What is your favourite childhood book? Did reading as a child have any bearing on your decision to become a writer?
Alice in Wonderland was a favourite and anything by Enid Blyton. I still love to read fairytales. As I mentioned in an earlier question reading was what inspired me to write my own stories.

What inspired your most recent book?
The Spanish Castle in Castle of Dreams was inspired by a visit to Paronella Park where I walked amongst the ruins of a castle that a Catalonian immigrant built in the far north Queensland rainforest in the early twentieth century.

How much research do you do? As an author of Historical Fiction, how do you balance the demands of getting the facts right and telling a good story?
I read a lot of memoirs from the period I am writing about as well as diaries and letters. I find first hand accounts are not filtered through the eyes of someone from a later period. I love research but it’s no use trying to put it all in your story. I try to look at things through the eyes of my protagonist: if something is unusual for their period in time they will notice it but otherwise it’s part of their everyday life. If I need to research a particular piece of clothing for instance I do that when I am writing the scene.

Do you read your book reviews? Do you appreciate reader feedback and take it on board, even if it is negative? How do you deal with negative feedback after spending so much time writing your book?
As a first time published author I read all my reviews and I appreciate reader feedback, positive or negative. I don’t consider it negative if I learn something from these comments. I don’t take it personally and it doesn’t worry me at all.

How much planning do you do? Do you plan / plot the entire story from beginning to end, or let it evolve naturally as the writing progresses? In terms of characters, are they already a firm picture in your mind before you start writing or do they develop a personality of their own as the story progresses?
I have a rough idea of where the story is going before I start writing. I get to know my characters as I write them. I had an outline for my work-in-progress that helped me get started but the story changed as I went along.

Have you ever had to deal with a situation where someone feels they recognise traits of themselves in one of your characters?
No because my characters and my story both come from my imagination. My characters are so real to me that if they walked through my front door I’d know them although I do let go of them when I have finished writing their story.

If you could go back in time for a year, which historical era would you choose to live in?
I love the forties of the last century.

If you could sit down for an afternoon with an iconic person from history, who would you choose to spend that time with?
It would have to be Alexander the Great one of the greatest military leaders the world has ever seen and I love military history. He was one of the most influential people in human history. About Castle of Dreams:
A ruined castle deep in the rainforest holds a secret that unites three generations of women: two sisters who find themselves in love with the same man as the Second World War rages and, decades later, a young woman determined to uncover the secrets in her grandmother’s hidden past.

Growing up together in a mysterious castle in northern Queensland, Rose and Vivien Blake are both sisters and close friends. But during the Second World War their relationship becomes strained when they each fall in love with the same dashing but enigmatic American soldier.

Rose’s daughter, Linda, has long sensed a secret in her mother’s past, but Rose has always resisted Linda’s questions, preferring to focus on the present.

Years later Rose’s granddaughter, Stella, also becomes fascinated by the shroud of secrecy surrounding her grandmother’s life. Intent on unravelling the truth, she visits the now-ruined castle Rose and Vivien grew up in to see if it she can find out more.

Captivating and compelling, Castle of Dreams is about love, secrets, lies – and the perils of delving into the past.