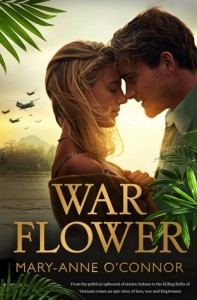 How many novels have you written and published and what prizes, if any, have they won?
I have written two published works with the third pending release this November. Gallipoli Street was my first, released April 2015, and to my surprise finished #3 in debut fiction 2015. Worth Fighting For, my second, came out October 2016 and the publisher says it’s out-stripping my first so I am, once again, gobsmacked. I was voted #13 in Better Readings hottest 100 and #4 for Australian authors 2016. The whole thing feels like an incredible dream – am I really a writer now? Very surreal for a mum in her forties. Very, very wonderful too. What inspired War Flower?
All of my books are inspired by real life. Gallipoli Street is set in WW1 and was loosely based on family- my grandfather was in Gallipoli and the Somme, and Worth Fighting For is set in WW2 and was inspired by my aunts and uncles. Four uncles served in WW2 – one was sadly killed. War Flower is inspired by a friend of mine who served in Vietnam and another close friend who is Vietnamese. I have always been deeply moved by the story of people power during the sixties- a time when people took to the streets in their hundreds of thousands to protest and bring peace back to the times. The Vets were sadly misjudged and those who loved them were left to pick up the pieces. This is extraordinary love. This is commitment at soul level; humanity at its most compassionate.

Describe how you research and the challenges of incorporating research into your story.
It is an enormous undertaking incorporating modern history into fiction- at times I spend endless hours trying to find a single fact to qualify a scene. (Thank God for cup of tea breaks and pats with my gorgeous dog!)

My greatest resources are the people who lived through the eras so I have read many, many soldiers letters, watched countless interviews and spoken for endless hours with family members and friends who were alive during those years. The hardest part is making sure I remain accurate and authentic to these generations who gave so much. To ensure I am historically accurate yet remaining true to the emotional journeys they undertook too.

How has being Australian and a woman impacted on your writing and/or writing career?
It has had a massive impact.

I’ve always been inspired by the adage ‘write what you know’ and I know Australia- all its beauty, its treachery, its power and wonder. I am the daughter of Kevin Best OAM, a well-known Australian artist who passed away in 2012. He taught me many things about our country and I learned to always watch a sunset, or trace the bend of a gum tree with my ‘mind’s eye’ under his loving tutorage. We have a young history alongside an ancient one, a passionately won identity that continues to strive for a ‘fair go’ for all. Even when we don’t always mange to achieve that- we try.

Being a woman has allowed me to write about motherhood and the fears we have for our children (imagine them going to war!). It has allowed me to search my heart and explore what depths I would go to for the partner I love. I have seen death, birth, acts of terror, acts of triumph and glory. I have seen injustice but I believe we strive for more. I believe in the mixed bunch building this nation. I believe we can do this beautiful place proud if we remember what our forefathers and mothers truly fought for: freedom and compassion.

A psychic has told you about your past life. Who were you and what did you do?
Well I can hardly say someone gorgeous and clever without sounding like an egotistical nightmare now can I? Ha. Actually a psychic did tell me once that I had a life in Stone Henge. That kind of fits. I’ve always had a penchant for overly dramatic dancing- especially after a few spiced wines…throw in some intoxicating moonlight and some Celtic fella covered in pelts…

How would you describe your new book to a reader?
War Flower is a love story, between men and women thrown together during turbulent times in a fast-changing world. Angus Turner has come a long way with his brother Spike – all the way from Broome to reach Surfers Paradise this summer of 65-66. Angus figures it’s all been worth it as he spies Rosemary dancing around the bonfire in the sand. More sparks fly, but will they be enough when the Vietnam War steals him far away? And will it be enough when she turns to drugs to keep the fear of losing him at bay? Ben Williamson is the wealthy son of a Sydney judge and will attend Duntroon, become an officer and see active service before he settles into a law degree. It’s a life prescribed to him from birth- only problem is it’s a life he doesn’t want. Poppy loves Ben, she has done for a long time, but when fate steals him from her grasp over and again she has to decide if that love can prevail. If it is strong enough to conquer even war. War Flower is the story of Australia fifty years ago, told from the generation who lived through it first-hand, during the only time in recent history when people truly took back the power. When world leaders were forced to finally give peace a chance.

When did you discover the Australian Women Writers Challenge? Do you think the challenge has had any impact on the awareness and discoverability of Australian women writers? Have you personally benefited in any way?
Yes – I have. I have been fortunate enough to be included and have great faith in Australian female writers. They are some of the favourite tomes on my shelves.

Thank you, Mary-Anne, and good luck with your book. About: ​The granddaughter of a Gallipoli veteran and the niece of three soldiers and a pilot who served in WWII, Mary-Anne O’Connor draws on her own family history to inspire and inform the writing of her sagas.