Childrens and Young Adults: Round Up Nine – 2017 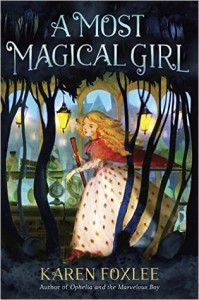 Welcome back for another month of Children’s and Young Adults reviews. Kate Forsyth reviewed two children’s books this month. First up was A Most Magical Girl by Karen Foxlee. Kate describes this book, which tells the story of a friendship between two girls, magical machines and witches and wizards, as delightful and whimsical:

“An enchanting story, told with simple lyrical writing, and just enough wild magic to keep it fresh and surprising, A Most Magical Girl is just the kind of book I would have loved when I was eleven. “

The second book Kate reviewed was Molly & Pim & the Millions of Stars by Martine Murray. Kate was particularly taken by the characters in this book:

“I loved the character of Molly, who thought she just wanted to be ordinary but discovers that being herself is better. I also loved her fey and eccentric mother, who wanders the garden and woods looking for ingredients for magical potions . . . Each character is deftly and vividly drawn, and there is a charming mix of humour, whimsy and poignancy. Glorious.”

Ashleigh from The Book Muse has been exploring the world of Snugglepot and Cuddlepie this month. In her review of the classic The Gumnut Babies by May Gibbs she talks of how these stories were some of the first Australian stories she was exposed to as a child:

“These books are delightful to read at any age, and I hope will continue to charm and capture the imaginations of children for many generations to come.”

She also reviewed Tales from the Gum Tree by May Gibbs and Jane Massam, a story aimed at introducing young readers to the world of May Gibbs.

“These three short tales are perfect to read to young children, or as a tool to help them learn to read when they are ready, and they will learn to identify native Australian animals as they read.”

Brenda looked at The Ones That Disappeared by Zana Fraillon a story of child slavery. She highly recommends it calling it “a powerful novel with an incredible message; a message of hope and friendship.” Meanwhile Kate also contributed Young Adult reviews this month, looking at Hexenhaus by Nikki McWatters, a story inspired by witch-hunts through history:

“Aimed squarely for a teenage audience, the novel moves swiftly and yet does not shy away from depicting some of the horror of the historical witch-hunt. The modern-day narrative helps ground the story in the here-and-now, showing that prejudice and intolerance to other people’s belief systems still causes harm today.”

Eleni reviewed Lifer by Beck Nicholas, a speculative fiction read looking at memory, finding answers and making discoveries. She recommends it for anyone who likes gritty and romantic YA set in the future. Meanwhile, Emily looked at A Semi-Definitive List of Worst Nightmares by Krystal Sutherland, a story looking at death, mental illness and domestic violence:

“I loved the magical realism aspect for the most part. I found Sutherland’s characterisation of Death really fascinating, and the idea of Death being able to fall in love, and die, and be taken by surprise sometimes, I thought was awesome.”

Finally, Cassandra reviewed The Undercurrent by Paula Weston, a “futuristic thriller, set a few decades from now in a dystopian Australia where corporations’ influence has grown to the point that they are the driving force behind government policy.” She found the book amazing, though recommends that it’s best for older YA readers, both for content and complexity.

“Paula Weston writes a fast-paced story, and this one is no exception. There’s a corporate conspiracy, layers and layers of scheming, a formerly peaceful protest group that has strayed into acts of terrorism, and farmers against the wall because they refuse to grow GMO crops. There is also a realistic romance, which is my favourite kind!”

I hope you have a great month of fabulous Childrens and YA reads!

About Melina – Despite others hinting that I am supposed to ‘grow up’ at some point, books for young people continue to play a huge part in my reading life. This has served me well – as a teacher, book recommender, parent and educational resource designer. I’m currently writing novel studies as teaching resources, enjoying the rich world of picture books with my five-year-old and one-year-old, revisiting some of my favourite authors and reviewing books