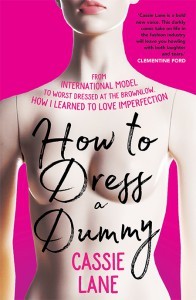 Thirteen books were registered as ‘History Memoir and Biography’ during September. Four of them have been reviewed previously: Jennifer Cameron-Smith reviewed Wish You Were Here which was mentioned last month; Calzean read Kristina Olsson’s Boy Lost: A Family Memoir, which has seven earlier reviews, and Anna Greenwood joined three other reviewers who have read Maria Munkara’s Of Ashes and Rivers That Run To the Sea. Rebecca Bower reviewed Clementine Ford’s Fight Like a Girl, which has received several other reviews over the last year.

Two of the books mentioned for the first time this month integrate the author’s memoir into a critique of gender relations in Australia today, highlighting the expectations placed on young women in terms of appearance and behaviour as sexual partners. Cassie Lane  is a former international model with a Masters in Creative Writing, although in some circles she is best known for dating AFL player Alan Didak, who only rates a brief mention in her memoir How To Dress A Dummy. In her review, Robin Elizabeth notes that

It is a book about not only Lane’s public life but the struggles she has faced as a girl and as a woman. Struggles that will be familiar to many women, not just world-renowned models. In fact the relatability of this book, which is written with colloquial dark humour, is what makes it such an interesting and easy read [review here]

Rosie Waterland’s Every Lie I Ever Told is a follow up to her 2016 memoir The Anti-Cool Girl, where she describes the neglect, abuse and instability she suffered as the daughter of addicts. As Jessica Stewart writes in this new book marks a maturity that comes with self-knowledge. Waterland learns from her experiences and, in recounting her shortcomings and flaws, she asks us to think about ours. … In Every Lie I’ve Ever Told, Rosie Waterland tells stories from her ruptured childhood – first laid bare in her 2016 memoir The Anti-Cool Girl – interlacing them with intelligent, wickedly funny observations about being a woman today…. She opens each chapter with a lie she has told herself and others over the years and weaves serious discussion among her self-deprecating stories. [review here] You may have been aware of the recent death of Connie Johnson after multiple bouts with cancer, who along with her brother Samuel, founded the ‘Love Your Sister’ charity. In her review of the book Love Your Sister, co-written by the siblings, Mrs B. notes that the book ‘is not simply a cancer memoir…’

It reads as so much more. … The book details Connie’s, along with her well known Australian entertainer brother, Samuel Johnson’s rather difficult upbringing in Melbourne…. In part two of the book, the reader is given an insight into the inception of the Love Your Sister charity. What surprised me most about this section of the book was the sheer time and manpower needed to get this great idea off the ground…. Ultimately, Love Your Sister, is a sad, heartbreaking book but inspiring nonetheless. Connie was a courageous woman and mother who fought so hard to live and save others lives. …Love Your Sister is a book that reminds us of the unconditional bonds of siblings and families, of the act of giving and the importance of continuing Connie’s legacy. [review here] A co-written memoir of a different kind is My Side of the Bridge which, as told to Mary-Anne Gale, which tells the life story of Auntie Veronica Brodie (1941-2007), an Aboriginal woman of Ngarrindjeri and Kaurna descent, and a widely respected elder. She was born at the Raukkan Community (then the Point McLeay mission) in 1941, and was later sent to Adelaide by the Aborigines Protection Board to continue her education. As Jennifer Cameron-Smith writes in her review:

In this book, through Mary-Anne Gale, she told of her life, of the challenges she faced, of the campaigns she was involved in for Indigenous rights. To read this book is to be reminded (albeit painfully) of elements of Australian history which are painful. [review here] Helen Garner has featured often in Australian Women Writers Challenge reviews, but Bill Holloway has been the first to review Garner’s series of 31 essays The Feel of Steel, published in 2001. Bill

found this collection much easier to read than a book of short stories for one reason, not because it is well written, although it is, but because the stories have one unifying focus – Helen Garner and her life from the end of her third marriage in the mid 1990s….. The stories cover a wide range of topics, but always with Helen at the centre, from a trip to the Antarctic ice, to dealing with the grief of marriage breakup, to engaging with her family, her parents, her sisters, her daughter, her grandchild. [review here] A memoir which reflects on Deafhood and the Deaf community is Donna McDonald’s The Art of Being Deaf: A Memoir. Reviewer Jemimah-Oddfeather read it as an introduction to her AusLan class:

I’m very new to learning about Deafhood and the Deaf community, and I think this book was a good place to start; it was recommended through a friend of a friend as a memoir of a Deaf woman exploring her relationship with her deafness while ‘passing’ as a hearing woman in a hearing world. …  [The author’s] conclusion, after her years of research, reflection, and conversations with her Deaf friends, is that ‘maybe the art of being deaf is the art of life, which, of course, is the art of love.’ [review here]. as a powerful early practical feminist, making her way in a man’s world, creating opportunities for women and for families (though at the expense of some neglect of her own), with the unstinting support of her husband.

At the beginning of each chapter Goldman has placed “imagined scenes that related directly to incidents covered within the subsequent pages.” Although he was disappointed to find that one of the short imagined scenes was totally imaginary, Bill rewrites that overall, “this is a powerful and very well documented work.” (review here) Documentation is the hallmark of Leonie Steven’s “absolutely beautifully written” book Me Write Myself, reviewed by Janine Rizzetti, with the bold prediction that it will appear on prize lists later in the year. Using the newspapers, exam results, sermons and letters written by the indigenous exiles on Flinders Island (Wybalenna) as rich and authentic historical sources in their own right, Stevens challenges the idea of Wybalenna as a passive, inert place where the indigenous people of Van Diemen’s Land were sent to simply dwindle away. Instead,

Events unfold, relationships form and breakdown, alliances shift….Through her careful reading, Stevens embodies these “inconsequential VDL faces” into living, active, resisting people….. Stevens engages and challenges other historians, but more with urgency and invitation to share, rather than oneupmanship.  This is academic history written with head and heart, and with eyes and ears open. (review here)

I’m Janine Rizzetti and I blog at the immodestly-named The Resident Judge of Port Phillip where I indulge my love of reading, history and seeing films and exhibitions just before they close. I am a historian, interested in Australian and colonial history, officially retired but more occupied than I thought I would be with my local historical society and learning Spanish.