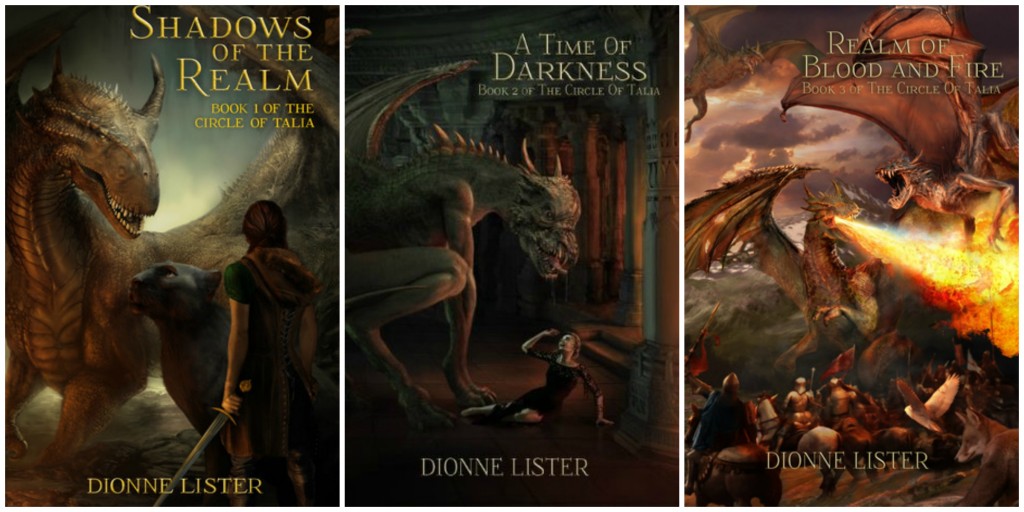 Today I’m catching up with indie publisher, Dionne Lister, a fantasy author from Sydney with an associate degree of creative writing. She loves writing and sharing her stories but wish they wouldn’t keep her up at night. In between writing epic fantasy and short stories she edits fiction and non-fiction – usually with her cat on her lap. Sounds like me – except there is a sausage dog on my lap instead of a cat!

Her first publication in 2012, Shadows of the Realm: The Circle of Talia #1, was the first of an epic fantasy trilogy. Filled with adventure, action, intrigue, and dragons it is for young adults and adults. Books #2 and #3 followed with A Time of Darkness and Realm of Blood and Fire. She then followed up with Tempering the Rose: The Rose of Terine #1 ‘…a dark epic fantasy series, where one woman’s thirst for revenge will put the entire world in jeopardy.’

I asked Dionne a few questions about her writing and why she chose to self-publish. How long have you been writing and why did you choose to self-publish? I’ve been writing since I was in primary school, and knew I wanted to be an author even then. I wrote my first book about 14 years ago, and have been studying and improving ever since. After many failed attempts at getting a publishing deal or an agent, I decided no one was going to tell me I couldn’t achieve my dream, so I did it myself. I could die waiting, otherwise, and where’s the fun in that?

What are main benefits of going the indie route with your novels? I get to decide on the cover and I can tell the story I want to tell without having to fill some section of the market the publisher thinks needs filling. The process to self-publishing a novel is much faster as well. So I suppose you could say it’s the control and speed.

What have been some of exciting highlights of your self-publishing career so far? Putting out my first novel and seeing the gorgeous cover on the paperback is the first. The second was being contacted by one of Australia’s most successful fantasy authors, Kate Forsyth and being asked to speak at the NSW Writer’s Centre. This led to me speaking at the Sydney Writers Festival in 2012, which was definitely a highlight. Also, being featured on the front page of Apple iBooks stores globally on a huge, pretty banner also is something I’m proud of, which led to my book, Shadows of the Realm being number 1 in several countries, and I’m now an all-time-bestselling iBooks author. Being placed next to truly famous authors who I look up to still gives me a thrill, because I’m a still a little fish 🙂 What are you working on now? I’m working on the second book in my second fantasy series. The book is a dark epic fantasy that follows the life of Addy, a woman who has to be dragged slashing and screaming to her fate, which is, of course, to save the world. Book one is called Tempering the Rose, and book two (the one I’m working on) is Forging the Rose (The Rose of Nerine Fantasy Series). My first book, a young adult fantasy, Shadows of the Realm, is being featured in a multi-author fantasy/scifi box set at the moment, and it’s in there with USA Today and New York Times bestselling authors, so I’m busy promoting that prior to release as well.

Thanks so much for interviewing me, Lisa! And hi to all the dragon-loving readers out there 🙂