Short Stories Round Up 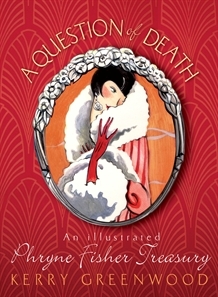 I am a Phryne Fisher novice but Bill Holloway at The Australian Legend has given a wonderful introduction to Kerry Greenwood’s character via his review of Greenwood’s illustrated Phryne Fisher Treasury A Question of Death. The Phryne Fisher character is a ‘wish-fulfilment figure’ based on the fictional Simon Templar (aka The Saint) and Bill says:

Phryne Fisher fans – and Saint fans too, probably – could not help but enjoy this book. It is beautifully presented and as always, lots of fun. And yet still it manages to be political – feminist, lovingly descriptive of working class and underclass life, and satirical of Melbourne society.

My interest is certainly piqued.

Sue at Whispering Gums provides a delightful in-depth review of Writing Black: New Indigenous Writing from Australia edited by Ellen Van Neerven and made available by the Queensland Writers Centre’s if:book initiative. It’s a collection that reassembles our idea of what a collection can be by its inclusion of different forms. But Sue informs us there’s more to it than that:

The pieces span moods from the intensity of Tara June Winch (“Moon”) to the cheeky humour of Marie Munkara (“Trixie”), from the anger of Kerry Reed-Gilbert (“Talking up to the white woman”) and the frustration of Steven Oliver (“You can’t be black”) to the melancholy of Bruce Pascoe’s (“A letter to Barry”). Many of the pieces speak to loss of country and identity, and the emotional impact of these. What makes them particularly powerful is that they come from all over, from the tropical north to country Victoria to various urban settings.

On to some romance. Michelle at Beauty and Lace gives A Very Country Christmas (by Fiona Greene, Alissa Callen, Rachael Johns, Juliet Madison and Victoria Purman) a reasonable wrap. Any book that includes a short story called ‘12 Daves of Christmas’ has to be worth a look.

There looks to be a fair bit of romance featured in Begin, End, Begin: A #LoveOzYA Anthology, and Cassandra Page give us a good overview of the included stories in her review.

I have been looking forward to reading reviews of two recently released collections of short stories: Melanie Cheng’s Australia Day  and Julie Koh’s Portable Curiosities but the reviews are, unfortunately, a little light on.

I first read and loved one of Melanie Cheng’s stories when it was Highly Commended in the Tasmanian Writers Prize back in 2015 and I was thrilled when I heard she had won the Victorian Premier’s Literary Award for an Unpublished Manuscript last year for her collection Australia Day. Theresa Petray gives Cheng’s now published collection four stars on Goodreads, finding much to like in the stories dealing with ‘issues of belonging, identity and home.’

There could be a bit of challenge involved too, I suspect, in Lisa Hannet and Angela Slatter’s Midnight and Moonshine.  Elizabeth Fitzgerald warns that the collection is not an easy read, with long time stretches and changing historical periods to deal with but she enjoyed the ‘gorgeous lyricism’ that added to the ‘fairytale feel’ of some of the stories.

Overall, Midnight and Moonshine is a complex, layered work with interesting nuance and beautiful language. I’d definitely recommend it to lovers of dark fantasy.

It could be best described as literary horror, but it is a kind of horror that will hold appeal to many readers who usually shy away from the genre. There is some gore here and there, but none of it is gratuitous – think of Red Riding Hood being eaten by the wolf rather than a deranged serial killer stalking the innocent, and you will come somewhere close.

And that’s a wrap. I look forward to bringing you the next short story roundup in February and hope there are lots of reviews to read.

About Me: I am a writer of short stories, essays, poetry and one novel and I am passionate about writing and reading the Australian voice. My bushfire themed collection of shorts was published in March 2017 by Hybrid Publishers. I have two chooks – Eleanor Roostevelt (Ellie) and Margaret Hatcher (Maggie). I occasionally (ahem, rarely) blog at www.karenleethompson.wordpress.com.