Crime Fiction and True Crime: Round Up Six 2017 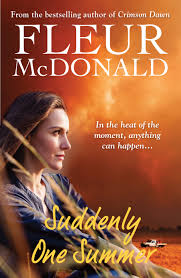 The final round up of crime fiction and true crime reviews for 2017 covers an eclectic mix of titles. There have not been a huge number of new releases in the past two months and many Challenge participants have already turned their minds to holiday preparation which may not be the best time to be contemplating murder and mayhem 🙂

A title which attracted some attention is Fleur McDonald’s SUDDENLY ONE SUMMER which fits into the romantic suspense and rural fiction categories; both of which are pretty popular right now. The multi-threaded story that takes place across two states includes a missing child, some stolen sheep leading to the discovery of family secrets and the need to identify a woman who doesn’t know who she is. At Debbish.com Deborah says of the book

I loved the characters and their stories were all interesting ones. As usual McDonald does a great job at capturing life on the land and includes a lot of (presumably accurate!!!) detail about sheep farming and wool and touches on new technology, such as biosecurity; as well as economic and ethical dilemmas – the balance between farmers overstocking land to maximise financial gain and viewing themselves as custodians rather than owners of the land (for example)…I kept turning the pages, so I was obviously interested in the unfolding plot, but it occurred to me for most of the novel that there really wasn’t any mystery to be solved. Until there is. Kinda.

Not exactly mixed feelings there but if you are left in any doubt perhaps Brenda, the AWW Challenge’s most prolific reader (and reviewer) will convince you with her passionate review at Goodreads

Suddenly One Summer is a fast-paced, intensely gripping romantic suspense novel by Aussie author Fleur McDonald which I flew through and absolutely loved! The tension in two different states, with two completely different situations was done extremely well. I have to say, I think Suddenly One Summer is this author’s best work to date! Highly recommended

A new book for the YA audience has possibly my favourite title of the year. It is the tale of teenager Grace who lives in a small country town, is known for being a prankster, is grieving the loss of her mother and becomes unwillingly involved in ghostly investigations. In her Goodreads review Carolyn says of Vikki Wakefield’s BALLAD FOR A MAD GIRL

This is such a good book on so many levels. The writing is gritty and honest and the feel of life for teenagers in a small community is perfectly depicted. Grace’s group of misfit friends are all interesting characters, learning to step out of their shadows in their last year at school in a small rural town to become independent adults.

Anna George’s second novel, THE LONE CHILD, is a psychological thriller and character study. Central characters include Neve Ayres, a young woman struggling to adjust to her new life as a single mother in the town that was once her holiday home. Via her daughter Neve comes into contact with Leah whose erratic mothering is, at least initially, open to Neve’s judgement. In her review at Newtown Review of Books Karen says of the book

Misdirection and doubt, harrowing emotion and poignancy are combined elegantly in The Lone Child. Despite no lack of opportunities for digs at the idea of the perfect mother, motherly instincts, and the expectations for care and concern for your children, The Lone Child opts for a different direction. It highlights much that is similar between the two women, and how much circumstances have affected their lives. It’s brave enough to explore the idea that motherhood is difficult for some women regardless of socio-economic status. All this emotional turmoil is set within a perfect backdrop. Isolated, stark, wintery, cold and slightly overbearing, it’s gothic in feel, feeding into the sadness and bleakness of both mothers’ struggles…

As well as being the last crime round up for 2017’s AWW Challenge this is my last post as co-wrangler of the challenge. It’s been a fun five years in which I have thoroughly enjoyed finding new Australian women crime writers to devour and new reviewers to follow. I’ll still be reading and blathering about crime books written by Aussie women at Fair Dinkum Crime, but it’s time to hand the AWW baton over to new blood.