History, Memoir and Biography: January 2018 Round Up 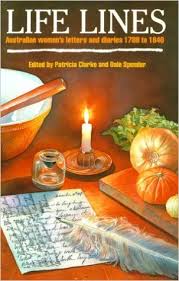 Ah- summer time! Reading time!  I’ve decided to include the end of December 2017 with this January round-up because those days after Christmas tend to merge into the New Year (well, they do for me), and I don’t want reviews posted at the end of the year to be ‘lost’.

All up, there were 26 reviews in the History, Memoir and Biography category between mid-December and the end of January. Some of these were for books that have been reviewed and noted earlier in 2017, most particularly Cass Moriarty’s review of Sheridan Jobbin’s Wish You Were Here; Kali Napier’s review of Australian Gypsies: Their Secret History by Mandy Sayer; Anna Greenwood’s review of Tracey Spicer’s The Good Girl Stripped Bare; Jennifer Cameron-Smith’s review of Me Write Myself by Leonie Stevens; and Sue at Whispering Gum’s insightful review of Bernadette Brennan’s A Writing Life: Helen Garner and Her Work. Bill Holloway’s focus in his Australian Legend blog during January on ‘Generation 1′ women writers has prompted reviews on early women writers’ works that have often been discounted or forgotten. As way of context, MST posted a review of Life Lines: Australian Women’s Diaries and Letters 1788-1840, which was published in 1992. She wrote:

A terrific place for the general reader to begin is with Patricia Clarke and Dale Spender, in their excellent book Life Lines: Australian women’s letters and diaries 1788-1840. Clarke and Spender provide intelligent commentary, and the many excerpts they include are comprehensive and fascinating.  (review here).

One of the ‘Gen 1’ writers that Bill himself reviewed was Annabella Boswell, whose writings have been published in several editions, most notably in Annabella Boswell’s Journal, published in 1981 and still available in some local libraries. She was born Annabella Alexandrina Campbell Innes in 1826 near Bathurst, and she grew up on her father’s grant at ‘Glen Alice’, some 200 km northwest of Sydney. There were three other biographies related to historical figures reviewed during January, although their focus was  on late 19th/early 20th century subjects. Janine at ‘The Resident Judge of Port Phillip’ blog reviewed Verna Coleman’s Adela Pankhurst: The Wayward Suffragette. The title is somewhat misleading, as the focus of the book is not so much on Adela Pankhurst’s history as a British suffragette, as on her life in Australia. Pankhurst moved from one end of the political spectrum as a WWI socialist peace activist through to her internment during WWII as a Japanese sympathizer, and Janine observed that although Coleman recounted this trajectory, she did not explain it as well as some other historians have done (review here).

Janine also reviewed Janet Morice’s collection of the letters of a WWI soldier in book Six Bob A Day Tourist. Tom Gardner, from East Melbourne, enlisted soon after war was declared, but his sister Mabel joined the peace movement in Melbourne. This is the story of WWI, told through one family. Janine writes:

At only 85 pages, this is not a long book, and it rattles along at a pace.  It combines imagined scenes with excerpts from Tom’s letters, illustrations, and contextual information….It puts a very human face on WWI, and it complicates the image we have of the family left ‘at home’.  Family members could love and grieve for their ‘boy’ overseas, and they could campaign for peace back home as well (review here). While the history of Australia’s federation fascinates some of us, it’s the context Ms Brett provides which makes her book so valuable…. Ms Brett’s biography has better informed me about both the man and the politician. While some of his ideas seem out of place today, many of the challenges he faced as prime minister are contemporary…. I’d recommend this book to anyone interested in the history of the formation of the Commonwealth of Australia and the first ten years after federation. I’d also recommend this book to anyone interested in a well-written book about the life and times of one of Australia’s founding fathers (review here). Catherine Hamlin has received worldwide acclamation for her pioneering work in establishing a fistula hospital in Ethiopia for women who are shunned for bladder and bowel incontinence as a result of birth injuries. In reviewing Hamlin’s memoir The Hospital by the River, Emily at ‘A Keyboard and an Open Mind’ writes:

I have to admit that there were times when this book challenged me a bit. In terms of personal values, Catherine and I are quite different. What I perceive as the great social movements of the 60s, Catherine viewed as degeneracy and worried for her son, whom she expected would finish his schooling in England. Catherine, a staunch Christian, does not believe in abortion; I do (and I’m rather of the opinion that religious beliefs shouldn’t get in the way of your medical profession). And yet, the great work that the Hamlins have done in Ethiopia tends to outweigh all of that, proving that someone can have different values to you and still be a wonderful person…(review here) Two reviews were received about Australian beauty journalist Katrina Lawrence’s recent book Paris Dreaming. After being initially struck by the sheer beauty of the production of this book, Amanda at ‘Mrs B’s Book Reviews’ wrote:

As a self confessed Francophile since I made my maiden voyage to the city of lights in 2009, I have read a lot and I stress a lot of literature on Paris. … I loved the fact that Paris Dreaming, by Katrina Lawrence, offered a fresh take on a city of thought I knew so much about….Throughout your time with Paris Dreaming, expect to be hit with plenty of historical fact, told in an engaging way. Expect plenty of beauty tips and fashion, plus fashion icons and trends of the Parisians. Expect anecdotes on feminism, politics, art and culture. Expect to taste and drink in the wonderful food and culinary delights Paris has to offer. Most all, expect to come away from Paris Dreaming learning a thing or two, or thinking a little differently on what the good life constitutes (review here)

An unusual choice of book for somebody who rarely wears make-up, doesn’t ‘do’ beauty, or has never been to Paris….The first half of this memoir was more interesting for me, but others will find many hidden treasures, like at a flea market on the banks of the Seine.

Nonetheless, she found herself identifying personally with the book because of her own family background, and has made a number of personal resolutions as a result of reading the book. You can read her review here. The Australian actress Portia De Rossi’s memoir Unbearable Lightness: A Story of Loss and Gain published in 2010, details her struggle with anorexia over many years. Kate at ‘Books are My Favourite and Best’ felt that:

the details about her weight fluctuations, calorie intake and measurements are so carefully documented that I couldn’t help but think that in the wrong hands, the memoir could almost be read as a ‘how-to’ guide to eating disorders.…, I felt exhausted reading about de Rossi’s regime, despair that people get to the point that she was at, afraid for young girls who get sucked into the body-image vortex… I guess I’m not entirely convinced that de Rossi has slayed her demons, despite the fairy tale ending of her memoir (review here)

A memoir of a more poignant and irrevocable loss is Georgia Blain’s The Museum of Words. Published posthumously, it is Blain’s response to the brain tumour that is taking away her words, written to rebuild her language and to rebuild herself. Kate’s review (also at Books Are My Favourite and Best) is a beautifully written tribute to a book that brought her “so many moments” to tears. Reviewer Jo Tamar wrote six reviews in one post, where she summarized her non-fiction reading for the year. Two of the books she reviewed were written by indigenous writers. Of Ashes and Rivers That Run to the Sea by Maria Munkara, has been reviewed several times during 2017, but the other, Busted Out Laughing: Dot Collard’s Story is new to the Australian Women Writers Challenge. Published in 2003, as told to Beryl Hacker, Dot Collard “is a famous actor you’ve probably never heard of”.  Jo writes:

[The]great strength of Busted as a story is that it is in Collard’s own voice. I cannot emphasise the importance of this, particularly because part of the wrong in what was done to the Aboriginal and Torres Straight Islander peoples in Australia was the removal of their voices….I highly recommend Busted. It is a fantastic book, and reading it gives us the chance to hear a voice from a group which has too often been silenced in this country. (review here) First published in 1988, Ruby Langford’s Don’t Take Your Love to Town has been described as a “seminal indigenous memoir”, and any memoir still in print twenty years later and found on countless school reading lists qualifies as a classic. Anna Greenwood writes that it is:

… a fascinating account of a life which is both ordinary and utterly remarkable. …Only occasionally does her frustration at missed opportunities emerge in the narrative, but when it does it is particularly poignant, contrasting with the matter-of-fact recounting of repeated hardships. The writing style is unconventional, stringing together anecdotes and recollections, but I found it very readable (review here)