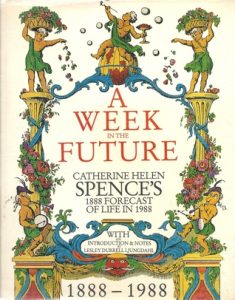 We had more awards news in March but, as we currently have no-one on our team reporting on them, I will again devote a section (see below) to them in this month’s round-up. But first, a brief statistical summary, for what it’s worth…

We had the same number of reviews this month – 51 – as we did in February. Here are some highlights:

Four classics this month, and such a variety they are too. The oldest, and only 19th century work, is Catherine Helen Spence’s A week in the future which was published in 1889, first serialised in Centennial Magazine and then in a book version. It’s a futuristic novel in which the main character spends a week a century hence, that is, in 1988. Reviewer Janine Rizzetti (The Resident Judge of Port Phillip) described it as essentially “a political tract, wrapped in a story”,

a vehicle by which Spence expounds on her views of the way society should run, largely influenced by her Unitarian faith. Like Unitarians in England, she favoured co-operative housing, she believed in girls’ education, and embraced a religion that did not grind its adherents under the burden of original sin.

It’s available online so there’s no excuse for those of us who’d like to read it. Anyhow, next up is my review of a short story, “The hand” by Mollie Skinner, published in 1924. I read it because Skinner was mentored by DH Lawrence who, with her agreement, took one of her stories, reworked it, and published it under their joint names. Her paying job was nursing, and she was also interested in the occult. Both of these are reflected in the short story.

The last two classics are Young Adult books, Libby Hathorn’s Thunderwith reviewed by Ashleigh Meikle (The Book Muse) and Melina Marchetta’s Looking for Alibrandi reviewed by Nadia L King. As Marchetta’s book has appeared here several times over the years, I’ll focus on Thunderwith this month. Published in 1989/1990, it won awards from Australia’s Children’s Book Council (1990) and the American Library Association (1991), and was also adapted for the telemovie, The echo of thunder. Ashleigh’s post is partly a personal tribute to a much-loved book that she first read she was in Grade 6 and has read many times since. It’s a book about love, particularly for family, she says, and is “filled with amazing, diverse and complex characters”.

Biographies make their way into my round-up for various reasons: they are classics, they are particularly “literary” in style, and/or they deal with literary figures, thus making them relevant to readers of this round-up. The works flagged for my area this month traverse all these criteria. Ever yours, CH Spence, edited by Susan Margery (and others) meets the Classic category because, although it was published relatively recently, it mostly comprises Spence’s writings from the mid-nineteenth century. Bernadette Brennan’s A writing life: Helen Garner and her work and Jenny Hocking’s Frank Hardy: Politics, literature, life, primarily represent the literary figures category, while Paula Keogh’s memoir-cum-biography The green bell: a memoir of love, madness and poetry and Alexis Wright’s collective memoir Tracker represent the literary-in-style group, given their Stella Prize listing credentials. Do use the Challenge Book Review search to find our reviews of these books.

Here, I’ll focus on Alexis Wright’s Tracker given it has only been reviewed once, to date, for the Challenge, and it was this month. It’s a long, rather different sort of book, I understand, and our reviewer n@ncy didn’t finish it.  She did not enjoy the style, but nicely identifies (in her dot-point style) what she saw Wright attempting:

1. This is an exhaustive form of
2. experimental  ‘collective’ memoir.
3. I think A. Wright decided to write her book in
4. this style because she wanted not to refer to emotion but
5. …to re-create it in the first person narrative.

A busy month for awards, with both winners and shortlists in various awards announced. Books not yet reviewed for our Challenged are asterisked. If you are seeking to make a BIG contribution to the Challenge, you could do worse than review one or more of these!

Adelaide Festival of the Arts

These biennial awards were announced on 1 March at the Adelaide Writers Festival, with the prize for fiction going to Eva Hornung’s The last garden. It has been reviewed a couple of times for the Challenge but not this month.

The shortlist was announced on 8 March and comprises 6 books – 5 novels/novellas and one memoir/biography:

Last month I noted that two longlisted books hadn’t been reviewed here yet, including one that was also shortlisted, Shokoofeh Azar’s Iranian-set book,The enlightenment of the Greengage Tree. This prompted challenge volunteer Brona (Brona’s books) to remember that she’d forgotten to link her review, which she has now done in time for my March round-up. After commenting on the gorgeous cover, Brona discussed her uncertainty regarding magic realism, noting what she likes and doesn’t like. It’s interesting how many of us are wary about this style. She found the book slow to start, but once in she did she loved it:

I dropped into a dreamy, almost trance-like state every time I picked up the book. Jinns and groves of trees haunted my own dreams as fleeting childhood memories of news items about the 1979 Revolution were triggered by events in the story. It was angry, it was heart-rending, it was glorious, mesmerising and confronting.

The shortlists for these extensive awards were announced on March 19. Two of the six books shortlisted for the Christina Stead Prize for Fiction were by women:

And four of the six books shortlisted for the Douglas Stewart Prize for Non-fiction were by women:

Paula Keogh’s The green bell was reviewed this month by Kate (booksaremyfavouriteandbest) who wrote this:

Various reviews of this book have focused on the unprecedented glimpse into Dransfield’s life and his poetry, and on mental health care in the seventies. I enjoyed these elements (I use ‘enjoyed’ loosely given that there is nothing enjoyable about electroshock therapy), however, other aspects of the book stood out.

These aspects include Keogh’s description of poet Michael Dransfield’s ability to listen to her in a non-judgemental way and also her discussion of her mother’s dementia. Kate writes that both these supported the book’s main theme from her point of view, which is “that we all just want to be heard.”

For the Indigenous Writers Prize, three of the five listed books were by women:

These awards, which are chosen by independent booksellers, were also announced in March, with the fiction winner being Sofie Laguna’s The Choke. It needs no introduction here, having been reviewed twelve times for the challenge since last August, including four this month. Most reviews are highly positive, but most also, like this month’s bhhopper (biblionetworker) comment on its darkness. However, we keep reading because, as hopper says, “as with her other books, Laguna’s writing is so beautiful, it is hard for the reader not to keep following the story.”