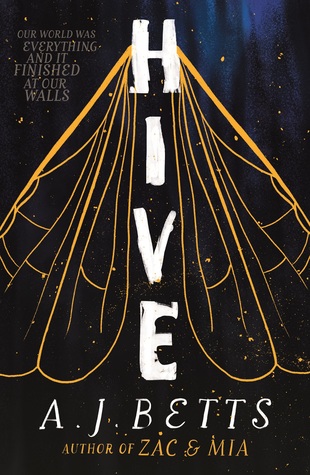 Hello again. Oh my goodness, it’s September already! I am writing this from my donga up on a minesite in the Pilbara in WA. I have had to drag my broken laptop up here with me so as I could get this round-up done in time. Yay! I got 2 weeks work operating my crane, but being on nightshift the whole time I’ve been wondering if I would be able to stay awake long enough after work to get this done, alas the universe stepped in and we have been given the night off, this will completely mess up my sleep pattern, but I do get to fill you in on all the great books that have been read during August.

I myself read two great books during August, both were featured in last months round-up. The first is HIVE by A.J. Betts which I thoroughly

enjoyed and highly recommend. I actually got to meet the author at a Dymocks YA bookclub event, she was so lovely and so enthusiastic in sharing her story about her book. She has agreed to do a Sunday Spotlight for us, so stay tuned for that coming up down the track. Nadia also read and enjoyed HIVE saying “Hive is a well-constructed narrative and compelling reading. It is an easy-to-read book that will stay with readers long after you delve within its pages.” We are both waiting impatiently for the second book, which unfortunately won’t be out until sometime next year.

The other Book I read was Beneath The Mother Tree by D.M. Cameron which was a wonderful book, I’ll mention it again this month because we had two other reviewers as well as myself who loved it. My review of this book is found here, I found this story, filled with Irish folklore and Indigenous beliefs and history wove its magic around me as I read. Jennifer says “The island has history, as do the people

who live there. The past is never far from the surface and the present is complicated. The environment is also important, and Ms Cameron describes the setting beautifully. The Mother Tree is central to the novel: important to both the Indigenous people and those of Irish heritage. There’s magic here, both in the story and in the telling of it.” And Carolyn says “It’s hard to believe this is a debut novel. The writing is very assured, the premise original and the atmosphere evocative and mystical.” We all recommend you take the time to read this book.

The next book is one I’ve never heard of before, Sacrifice by Gwendolyn Beynon is the first in a trilogy and was read by Eleni who says “Wow, just wow. This historical fantasy has everything you could wish for- legends, gritty realism, and dragons.” Her review has convinced me to take a look at it, it sounds like something I would enjoy.

Eleni also read The Golden Apple by Michelle Diener, this seems to be the first in a duology, she rated it highly and says “I enjoyed this book the further I got into it most likely because the heroine was becoming more powerful and started believing in herself, instead of

feeling like a pawn in other’s games.” I’m adding this to my list also. If anyone here is going to the West Coast Fiction Festival in November, Michelle is one of the attending authors, so this might be one to take a look at if you are planning on meeting her.

for spooky and surprising and generous and sweet, then I solemnly swear you should pick up ‘Yellow’ by Megan Jacobson. Because it’s all of these things.” and “Clever writing. Coming with a warning that this book deals with issues like suicide, bullying and alcoholism.” Once again I’ve added this to my TBR list, every time I knock a book off of this ever growing list, along come three more to go on.

Now here is a series I am dying to get my eyes on! The Verity Fassbinder series by Angela Slatter, I have been hearing some great things about this series and during August all three books in the first trilogy were reviewed.

First up is book #1 Vigil which was reviewed by Theresa Smith Writes who admits to not being a big fan of urban fantasy and paranormal fiction, but this book is so much fun. She says “Verity Fassbinder is the bomb! She’s quickly become one of my favourite urban fantasy characters of all time” check out her review and also her site as I know for a fact she has devoured all three of these books this month as well as a fabulous Behind the Pen interview with Angela Slatter which you can read here. These books are set in Brisbane which Theresa says “grounded this novel for me, with the familiar landmarks and local lingo. I just felt like I was able to connect so much more to the characters and the story than what I ever have before in an urban fantasy novel.

Next is book #2 Corpselight which was reviewed by 3 of our readers. Theresa Smith Writes has written another great review. Isobel writes “The plot u

nfolds by increments, the main crime supported by other, seemingly lesser crimes, the reader compelled to turn the pages to discover how the various plotlines are connected. There’s a delicious sense of danger and fascination as the story unfolds, with plenty going on to keep the reader entertained and a good balance between crime solving and the domestic life of the protagonist.” She also says “Slatter handles the fantasy dimension well, but Corpse Light is foremost a crime novel and as long as the non-fantasy reader is able to suspend judgement on the existence of witches and sprites and elementals and other creatures inhabiting a parallel reality we can partially see, then she will find Corpse Light an entertaining read. Ultimately, Slatter gives readers in both genres what they are looking for in a good novel.” Kali Napier also gave this 5 stars.

And now for book #3 Restoration which was reviewed by Theresa Smith Writes and Jess @ The Never Ending Bookshelf. Theresa writes “Once again, Angela has blown my mind with her plotting and world building, connecting dots from long ago and drawing a picture I couldn’t have even come close to imagining. The action is non-stop, the characterisation on point and the wit just keeps on rolling.” She also

Oh dear, I can see a spending spree coming on, I don’t think I can wait for the library to order these books for me!

Zeroes is the first in a YA trilogy which is a collaboration between three authors  Scott Westerfield, Margo Lanagan and Deborah Biancotti. Nicole reviewed this one for us and she says “this is great read for those

who are tired of the usual super hero genre and are looking for something different.

Giants of the Frost by Kim Wilkins was reviewed by Kali Napier who said she really enjoyed this book “The first part of this novel seems slow, but I was being drawn into th

e story by the clever plotting and world building. This was a story I kept wanting to dive back into, with a sense of glee at rejoining the characters as their stakes increased.” I’ll bet you won’t believe me when I say I have added this to my TBR list too hahaha.

Mettlestone is a book of beauty, from the lovely cover, to the adorable illustrations, to the magical words that fly off the page on the back of a flying unicorn and envelop the reader in the story – so much so, that whilst reading one day, I didn’t even realise how much I had read and that I was only a few chapters from the end of the story.” She writes “Bronte is the childhood hero for girls that my generation needed, that this generation needs, and in fact, that every girl, and woman, no matter her age or identity, will hopefully enjoy, and have a laugh with, worry and hope with her.”

Lastly is His Name is Walter by one of Australia’s favourite storytellers Emily Rodda, suitable for ages 9 and over and I take that to mean adults too (well th

is adult anyway). Amanda from Mrs B’s Book Reviews says “As the children’s imagination is held captive by Walter’s adventures, the reader and the group learn of Walter’s background, his upbringing, his love for another and his search for a witch’s lost daughter. Readers are given an active role alongside the school excursion children to solve Walter’s beguiling mystery. For those with wild imaginations, this book is the perfect antidote. His Name is Walter is an enjoyable book within a book,  this set piece has the power to bewitch young readers with its fantasy and mystery based elements.”

Well I’m exhausted after reading through all the reviews, adding more books to my TBR pile and enjoying getting these books out to you all as well as staying up until after 2am to try and preserve my nightshift sleep pattern. Last round-up I said I’d review S.D Wasley’s last 2 books in The Incorruptibles series so here is the link for my review of book #2.5 Unforgivable and book #3 Uprising, it’s such a great YA series I hope you check it out and let me know what you think. And that goes for all the books on here, please drop me a line if you read them and let me know if you enjoyed them or not. So until next month which is scarily close to the end of the year, I’ll say goodbye and wish you all some happy reading.