History Memoir and Biography Round Up: October 2018 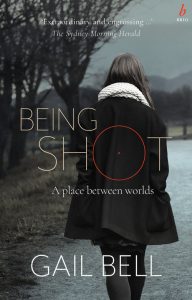 I wouldn’t be the first person to comment on the popularity of memoir and ‘life writing’ at the present time, but it’s certainly the case that memoir dominates the October contributions to the Challenge.There were twelve books reviewed this month, three of which have been discussed in earlier round-ups. Janine at Resident Judge reviewed Judith Brett’s prize-winning The Enigmatic Mr Deakin, bringing the number of reviews to four. Kali Napier reviewed Melissa Fagan’s What Will Be Worn which now also has four reviews, while Angharad at Tinted Edges added a second review of Zoya Patel’s No Country Woman. First published in 2003 as Shot, in Being Shot: A place between worlds Gail Bell reflects on the experience of being shot in the back as a 17 year old in 1968 as she walked home from the train station. In her review on the Newtown Review of Books, Ashley Kalagian Blunt writes:

Being Shot is Bell’s personal exploration of the short- and long-term effects experienced by victims of gun violence. …In this, her second book, she grapples with her own trauma to consider what tragedy has to teach us and what we can learn from survivors of violence…. Blending memoir with journalism, Bell examines her own experiences, alongside those of a number of other shooting victims, to consider both the physical and psychological aftermath…. Being Shot is a sober contemplation of the repercussions of gun violence on individuals. Bell acknowledges the challenge of guns in a society where not everyone manages ‘a realistic grip on good citizenship’. Despite this, she offers optimism, both in the insights from our advancing understanding of PTSD, as well as the coping strategies she developed through difficult years. (See review here) Alannah Hill is one of Australia’s most successful fashion designers, but in 2013 she walked away from her international business. In reviewing her memoir, Butterfly on a Pin: A Memoir of Love, Despair and Reinvention, Kate Forsythe writes:

Her story, Butterfly On A Pin: A Memoir of Love, Despair and Reinvention, tells the story of her poverty-stricken abusive childhood, her wild adolescence, her search for love and meaning, and the creation and loss of the iconic Alannah Hill brand. The writing is raw, honest, heartfelt, and poignant. I was deeply moved at times, discovering the hurt and heartbreak behind her manic energy and edgy flamboyance. (See review here) A less high-profile career is described in Sandy Macken’s memoir, Paramedic. Tracey Carpe Librum both reviewed the book and interviewed the author. She notes:

Paramedic is a look at Sandy’s 20 years service as a paramedic – or ambo – in Australia and covers the medical aspects, the humanity of patients and their loved ones and the toll it can take on first responders…. Running parallel to Sandy’s demanding career looking after patients on what can often be the worst day of their lives, was the story of her spiritual journey. This gives the reader great insight into how Sandy has managed – and sometimes failed to manage – the stresses of her job and provides inspiration to those needing optimism and hope in their lives. ( Click links for review and interview)

From ambos to teachers, Gabbie Stroud’s book Teacher is an extension of an essay that she wrote for the Griffith Review about her decision to quit teaching, a job that she thought would be  her life calling. In her review, Kate Forsyth observes:

Her essay stirred up a lot of controversy, as more and more teachers began to criticise Australia’s education system. Allen & Unwin asked her if she’d be interested in extending her essay into a book-length memoir, and Teacher is the poignant and powerful result…. Interweaving her own personal journey towards being a teacher with anecdotes from the classroom, Teacher illuminates the enormous difficulties our teachers face today…. Gabbie Stroud shines a penetrating light on all that is wrong with the Australian education system and how it fails both our children and our teachers. Impossible to read without choking up, this is an eloquent rallying cry for change…. (Review here) Finally, journalist and Chat 10 Looks 3 podcaster Leigh Sales draws on her experience as a journalist, integrates research into the way the brain processes fear and grief, and explores her own experience in Any Ordinary Day. Subtitled ‘Blindsides, Resilience and What Happens After the Worst Day in Your Life’, Sales book combines memoir and analysis in a reflection on how any of us deals with a life-changing event. N@ncy found herself lost for words in reviewing a book that she describes as “Absolutely inspiring!”

My review (NF) was so short on #AWW2018 because the book had such an impact on me…I was at a loss for words. But every day I think about that book…every day. Leigh Sales managed to make me realize that if you look around your ‘ordinary day’…in hindsight they are nothing but miraculous. Life can change in an instant. (Review here)

On her Whispering Gums blog, Sue Terry coined the phrase ‘hybrid biography-memoir’ to describe the genre where the biography is of another person, while the memoir is of the author.

Hybrid biography-memoirs… tend to be as much, if not more, about the other person as the writer. The end result might be the writer understanding themselves more, but the focus tends to be the other.

Two books reviewed this month fall into this category. First there is Nadia Wheatley’s Her Mother’s daughter: a Memoir, where author Nadia Wheatley writes a biography of her mother, who died when Wheatley was only nine. Unable to question her mother as an adult, Wheatley draws on her own memories of her mother (quite amazingly written when Wheatley herself was only ten), letters, journals and interviews with family members and friends, and official records. She uses the third person to write about her mother, but switches intermittently and suddenly to first person to present her own role in the research for the story. Sue writes:

the main joy in reading Her mother’s daughter lies in its social history of the first half of the twentieth century. Wheatley’s story of her mother’s experience as an active participant in World War 2 is vivid, and makes a significant contribution to a less covered aspect of that war….Her mother’s daughter is a great read for two reasons. Firstly, it provides a thoughtful, authentic – sometimes exciting, sometimes disturbing – social history of the times. And secondly, with Wheatley’s ability to write engaging narratives, it makes for engrossing, moving, provocative reading. (Review here) The second review that falls into this category is A Letter From Paris by Louisa Deasey. Again, the subject – in this case her father- died when Deasey was just a child, and on seeing a photograph of him she realizes that the man she knew was already suffering from the cancer that would kill him. In her review published on the Newtown Review of Books, Jeannette Delamoir writes:

Then suddenly, a Facebook message from France presented an invitation to learn more about her father. A stranger named Coralie wrote: Are you related to Denison Deasey? …Initiated into a challenging journey of discovery, the author learns about her father as well as about herself…. The quest structure reveals just enough at just the right time, drawing the reader into Louisa’s growing closeness to her father, and the intensifying connection with her new French ‘family’. (Review here) Only one of the reviews featured this month could be classified as an academic, disinterested historical biography. Charles Swanston was a Tasmanian banker during the 1820s-40s. His banking activities underpinned the colonial economy of Van Diemen’s Land prior to the 1841 Depression, and he was one of the founding members of the Port Phillip Association best known today for the putative ‘treaty’ they signed with the indigenous people of the Kulin nation in Victoria. In her review of Eleanor Robin’s Swanston: Merchant Statesman, Janine at Resident Judge observes:

Robin closes her book noting the lack of acknowledgment of Swanston in the town with a main street named in his honour. She’s right, and her book goes a long way towards filling this vacuum. In a narrative sense, she has walked around Charles Swanston, profiling him from different perspectives: military man, legislator, merchant statesman, Port Phillip Association member, financier and family man. (Review here)

About: I’m Janine Rizzetti and I blog at the immodestly-named The Resident Judge of Port Phillip where I indulge my love of reading, podcasts,  history and seeing films and exhibitions just before they close. I am a historian, interested in Australian and colonial history, officially retired but more occupied than I thought I would be with my local historical society and learning Spanish.