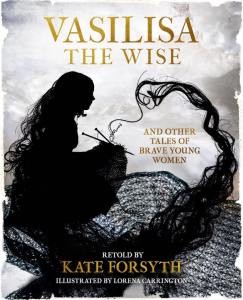 Hello everyone, OMG it’s December, where has this year gone? Mine seems to have just disappeared and the only thing I have to show for it is a huge amount of books that I’ve read, which isn’t a bad thing I guess lol. I hope everyone here got to read plenty of great books this year too.

We had 9 books reviewed during November

First up is a book that has gotten lots attention since being published nearly 12 months ago and one I still have yet to read. Vasilisa The Wise And Other Tales of Brave Young Women by Kate Forsyth and beautifully illustrated by Lorena Carrington was reviewed by Anna who

wrote ” I really enjoyed this collection of fairytales featuring heroines who don’t wait to be saved, but instead take control of their situations with agency and determination. The stories are enchantingly written and capture the fairytale atmosphere well. The intriguing illustrations are well suited to the stories, and make a refreshing change from the images of bright cartoonish Disney princesses which are so ubiquitous. While my local library has categorised this as ‘Young adult fiction’, I think it would be enjoyed by younger children and adults alike.”

author Jessica Townsend, and it is just as fantastical and exciting as the first. Fast paced with loads of action, plenty of magic and heart stopping tension, Wundersmith is one I highly recommend. But I also suggest Nevermoor be read first so the full benefit of the series is felt.” This is on my Christmas list, but I am sooo tempted to go and buy it beforehand, I will try and be patient, I mean Christmas is scarily only 3 weeks away after all. This is a middle grade children’s book that can be enjoyed by any age (in my opinion).

some fantastic books this year. Icefall is up there with the best of them. It blends hard science fiction with spirituality, then packs the cast full of diverse women and puts some compelling relationships at the heart of it all.” she writes a great review and ends it with “Icefall was one of the most compelling stories I’ve read this year, hooking me in and not letting me go. Already, it’s calling me to return and reread.” Surprise surprise she’s convinced me to add this to my ever growing TBR pile, and since it’s a novella I should be able to slot it in to read somewhere.

A Superior Spectre by Angela Meyer has been described by Cass Moriarty as a strange genre-bending blend of historical fiction and science fiction. She says “it hooked me and engaged me much, much more than I would have imagined possible. And I suppose that is because, like all good writing, this novel traverses the human condition, in this case exploring themes such as identity, belonging, death and dying, sexual desire, madness, feminism and friendship, all wrapped up in a shape-shifting, interconnected tale of the past and the future.”

Sci-fi seems to be the theme for this month with the next book being described as Sci-fi-dystopian, it is book 2 in the Ophancorp series by

Marlee Jane Ward, I had a look at book 1 while I was there and it sounds like an interesting series. Calzean has read both and reviewed book 2 Psynode during November, her thoughts were “The book is fast paced, tech savvy, short but not so sweet. The author is keeping her readers on tenterhooks.”

The Dark Rose (The Four Sided Pentacle #4) by Denise Rosetti was an Australian Romance Readers Association (ARRA) Award nominee in 2012 and was reviewed by Eleni who says “A brilliant ending to the series. It was all wrapped up nicely and the mystery of the four sided pentacle explained. I lo

ved seeing the Pentacle ‘gang’ all together again. It’s their final battle and they give it their all. It’s why we love them. I love the way the story has unfolded with such beautifully written prose. There’s a lyrical rhythm to Rossetti’s writing, which I love. I’m sad the series is over but glad of the satisfying ending.” I might have to take a look at this series one day.

Next is a new release that I had the opportunity to read during November which I describe as “A vampire story with a difference”  The Vampire’s Covenant by Georgia Carter Mathers. In my review I mention “there is a fair

bit of angst between the two main characters in the first part of the book, which started to grate on me, but the second part of the book completely redeems itself and the pace picked up in all aspects” I seem to have a real issue with too much angst in books lately, but please don’t let that put you off as it is definitely a good read. The theme of bullying is also explored during this book.

vivid illustrations. As Frogmouth looks for her home, she encounters a range of Australian animals until she meets the moon and finds her home in the night sky. This simple retelling of a Dreamtime story would be accessible to a range of age groups. The highlight for me was the illustrations, with their vibrant depictions of animals and their homes, the sun and the moon. They are well-suited to the text and bring the story to life.” I do like books that have Dreamtime themes

“The beloved characters of May Gibbs books: Blossoms, Lilly Pilly, Baby Possums, Ragged Blossom, and of course the Gumnuts, Snugglepot and Cuddlepie, all of these star. Splashing in the sun and walking a bull-dog ant, swinging and climbing, all these need to be abandoned for bedtime talk, dinner, a nice warm bath, a story, then one last giggle before laying down sleepy heads. Enchanting!”  Oh those Gumnut Babies do take me back to my childhood and they never seem to date, in fact for anyone living in Perth there is a May Gibbs Snugglepot and Cuddlepie, 100 Not Out Exhibition on until February 2019.

Well that’s Novembers books wrapped up, I hope you all have the chance to read some good books in December to round-up the year. So there are 3 weeks until Christmas and I hope you all get a truck load of great books as presents, I know my wish list is pretty long, so I’m hoping Santa is feeling generous this year. Let me know what you’ve been reading and if you pick up any of these books featured, I’d love to hear your thoughts. Until next time, which will be next year!! Oh my goodness that sounds crazy, have a fabulous December.