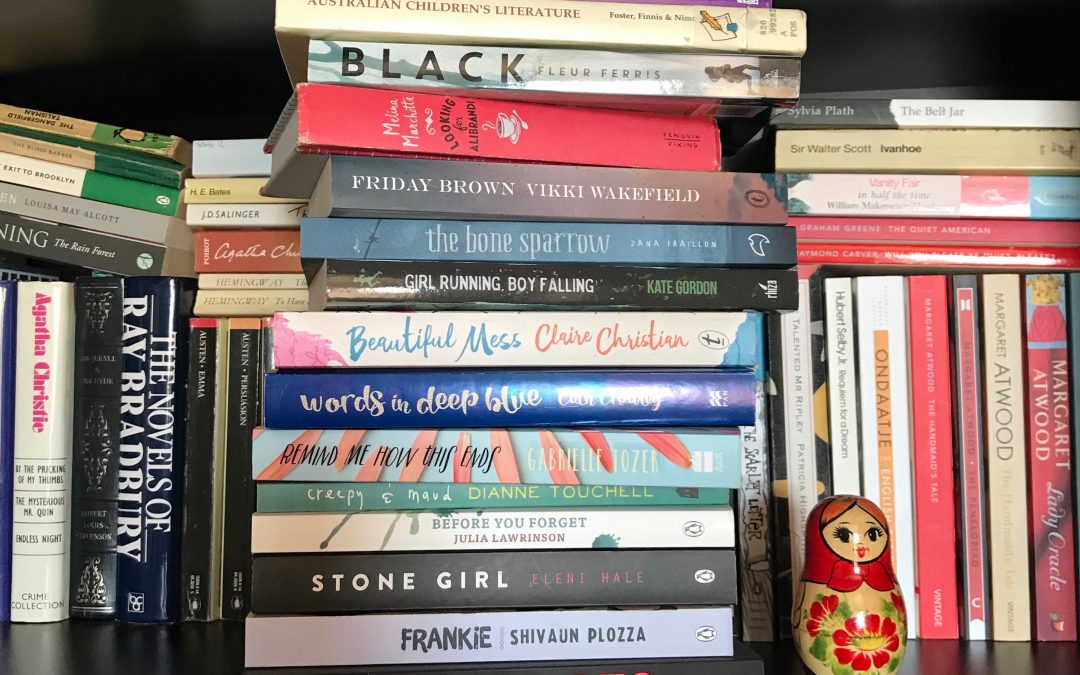 I won’t remind you of the number of shopping days left until Christmas, so without further ado, let’s get stuck into the handful of young adult books reviewed for the Australian Women Writers Challenge in the last few weeks.

Bob Holloway wrote an interesting account of Ethel Anderson’s book, At Paramatta, a book of short stories published in 1956:

Ethel Campbell Louise Anderson (1883-1958) was born into the Australian squattocracy, in England to Australian-born parents, was brought up in Sydney and on her grandfather’s station, Rangamatty, near Picton, and went to school at Sydney CEGGS.

Anderson had short stories published in various magazines. At Parramatta appeared in the Bulletin in 1956, and is variously described as a novella and, to use a term coined by Frank Moorhouse, a collection of ‘discontinuous narratives’. The two stories from At Parramatta I review below are included in Australian Short Stories, ‘selected by Kerryn Goldsworthy’. The text itself doesn’t say when they are set but I would guess around 1880 or earlier. The coachman is a ‘murderer’ and by implication a convict. Transportation to NSW ceased in the 1840s but I don’t know for how long after that trusted convicts were let out as servants and labourers.

From the 1880s, we move to present day Australia and Eleni Hale’s powerful debut, Stone Girl which was reviewed by Calzean:

Australia, the Lucky Country. Not for 12 year old Sophie who finds herself a ward of the State after her alcoholic mother dies. Sophie quickly learns how to survive in a broken system and lives in various foster homes while spiralling into alcohol, drugs and crime.
This is a harrowing story, based on the author’s own experiences. The voice of the narrator is honest, raw and rages with frustration, anger, confusion, hopelessness and loneliness.

The book left me feeling quite deflated and unsettled to read about the lives of those children with no parental or guardian support and love, living in the same city as I do.

Brona reviewed The Slightly Alarming Tale of the Whispering Wars by Jaclyn Moriarty, the second book in Moriarty’s Kingdoms and Empires series which:

…begins in the little town of Spindrift where we meet two groups of kids – one group from the orphanage, the other from an expensive, exclusive boarding school. A friendly sporting rivalry between the two schools quickly blows up when one of the children suddenly disappears. The Whisperers have kidnapped another child.

A tentative alliance is formed, a plan of rescue is hatched and Bronte makes an unexpected reappearance. Mystery, adventure and a little bit of magic is the name of the game.

I love this series for mature 9+ readers a lot and I hope that Moriarty has many more books planned for the Kingdoms and Empires. Due to the different time frame and setting in this book, it could be read as a stand-alone story, but you’ll want to go back to see how Bronte came into the story in the first place. It was a savvy move by Moriarty to expand the horizons and history of this series to include the entire kingdom and I look forward to seeing where and when we end up next.

I was really torn about what to rate this. There are some really well done sections, but I was kind of put off by a main character who didn’t take anything seriously, so it made it hard to feel like the stakes were ever very high. This was the same issue I had with The Martian: he’s stuck on a different planet and may well never get home and he’s making jokes about Aquaman and disco music.

This book did have some really good conversations about representation in media and whose voices should be privileged when it comes to particular stories. It handles racial tensions, sexuality crises and disability awareness really well.

I didn’t mind Friday’s quirkiness at first, in fact, I quoted a few lines in my GoodReads status updates that amused me a lot. But when it kept up, it got a bit old. There was also no build-up to the romance – literally the superhero she has been crushing on says “Hey, we’re going to be here a while, wanna make out?” and then they did. And then they were a couple. I need a bit of build-up!

To finish off the year, I reviewed Dianne Wolfer’s Border Line:

Dianne Wolfer is one of Western Australia’s treasures in children’s literature. She’s the author of a number of picture books, early chapter books, middle-grade books, junior fiction, and young adult fiction. I’ve included a full list of Wolfer’s books at the end of this review.

Border Line is one of Wolfer’s early novels and it was published in 1998 by Fremantle Press. Border Line tells the story of Cassie Falconer, a teenager from Perth whose world is shaken by her father’s redundancy. All is not lost, however, because the family relocates to Eucla, a small dot on the map 1,500kms away from Perth. Eucla feels to Cassie as if it is a million miles away from school and her friends. What could be worse to a vegetarian teen than a dad whose new job is to shoot starlings?

While I thoroughly enjoyed getting to know Cassie, two other things I absolutely loved about this book were:

Border Line is a book about a girl growing up in the Australian bush and has themes of friendship, diversity, family, and appreciation of nature. Wolfer gently tackles themes of racism and conservation, and gives readers a sense of the vastness and wonder of the Western Australian bush.

This is my last round-up for the AWW Challenge as I move on to new adventures next year. Thank you for participating in the Challenge and for reading books by Australian women.

NL King is an author, blogger, and presenter. Her debut book, Jenna’s Truth, is published by boutique small press, Serenity Press based in Western Australia. Nadia is passionate about using stories to reflect a diversity of realities in order to positively impact teen lives, and runs a teen book club for the Centre for stories. She also enjoys writing short fiction and lives in Western Australia with her family. You can read her blog, find out more about her and her writing at her website, or follow her on Facebook, Goodreads, Twitter or Instagram.