History Memoir and Biography Round Up: January 2019 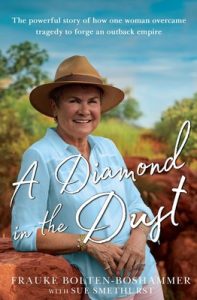 With enervating heat for some and driving rain for others, January also brought us thirteen reviews in the History Memoir and Biography category. Some of us read and reviewed books that have already been featured in past round-ups. Louisa Deasey’s A Letter from Paris received two new reviews, one by Kali Napier and the other by Jenny Mustey. Alexis Wright’s Tracker was reviewed thoughtfully by Jonathan Shaw – check it out!- bringing the total number of reviews to five. Jonathan also reviewed Phillipa McGuiness’ The Year Everything Changed: 2001, while Jennifer Cameron-Smith reviewed Leigh Straw’s Lillian Armfield: Australia’s First Female Detective. Two ‘outback’ memoirs were reviewed during January. One is a recent release, while the other has been around for many years. Amanda@MrsB’sBook Reviews read A Diamond in the Dust, about a German immigrant to outback Kununurra, which borders the Northern Territory and Western Australia. There she began a lucrative business selling diamonds from her backyard to tourists, eventually leading to the establishment of her own diamond empire that specializes in rare pink diamonds. Amanda writes:

Reading A Diamond in the Dust by Frauke Bolten-Boshammer and Sue Smethurst is a little like being the observer while someone puts on a family projector. Reel upon reel of vivid images of Frauke’s life appeared before my eyes, as I placed my myself in her shoes…What I enjoyed the most about A Diamond in the Dust was the fish out of water feeling expressed by Frauke….Frauke Bolten-Boshammer is an everyday hero and we need more books about life’s pioneers. (review here)

And the older memoir? It’s Jil Ker Conway’s The Road from Coorain, (1990) which, as Calzean observed in her review, “describes with great clarity and love of the harsh, dusty, dry and lonely life of graziers in the post-WWII era” and serves “as a great timepiece of Australia in the 40s, 50s and 60s.” (review here) Again, some new books and an old one. Sharon Hill reviewed Rachael Treasure’s Down the Dirt Roads, a change of direction into memoir by one of Australia’s leading rural writers and bestselling novelists. Sharon writes:

This is a wonderful heartfelt memoir of Aussie author Rachael Treasure’s life. In this memoir we get a glimpse of the struggles that Rachael endured during her marriage breakdown and being a single mother. This is one determined, strong willed and inspiring lady who never gave up even if the odds were against her. (review here)

Journalist Jill Stark also ventures into memoir in Happy Never After. The subtitle of her 2018 book is “why the happiness fairytale is driving us mad (and how I flipped the script)” In her review, Anna Greenwood writes:

And the older biography? In Miles Franklin’s Joseph Furphy: the legend of a man and his book we have one of Australia’s great writers writing a biography of another of Australia’s great writers! Bob Holloway’s fascinating post tells about the writing of this biography of Joseph Furphy, author of ‘Such is Life’, written in association with Kate Baker. You’ll need to read Bob’s post to see who she was! The biography, published in 1944, is now out of print. ‘Florence Broadhurst: Her Secret & Extraordinary Lives’ by Helen O’Neill is unquestionably a beautiful book. I’d go so far as saying it’s one of the loveliest books I own…. Interestingly, no one person knew ‘all’ of Florence. Many of those close to her didn’t discover significant details about her life – for example her true age, or that she was born in Queensland rather than into British society – until after her death. Some call it reinvention, some call it clever, and others use the word fraud….(review here) Finally, January brought us two reviews of books on medical themes. Janine at Resident Judge of Port Phillip wanted to know more about the experience of childbirth in colonial Australia. In her review of Lesley Potter’s book Mistress of her Profession: Colonial Midwives of Sydney 1788-1901, Janine writes:

The book traces through the beginnings of maternity care in Sydney, from the Female Factory in Parramatta, through the unsuccessful efforts of Dr Tierney to establish a private lying-in hospital, the development of the Benevolent Asylum, which did not have trained midwives until after 1879 and the gradual increase in private lying-in and maternity homes, especially in the 1890s. …Potter has brought many of these women out of invisibility by naming them, but I’m not sure that she actually achieved her aim of bringing them to life or explaining and interpreting them to the present generation.(review here) A history of a very different kind to what we normally review here is Deborah Wheeler’s Kyoomba Sanatorium Vol 1 and 2. In her review, Cass Moriarty writes:

these two volumes offer a wealth of information about the Kyoomba Sanatorium which was located in Stanthorpe and utilised from 1916 to 1935 to treat returned soldiers recovering from tuberculosis and other lung diseases after World War I….These two volumes are a great addition to the body of knowledge surrounding the ANZAC soldiers and their treatment after the war and would be of interest to anyone researching World War I history, or to those who have a personal connection to someone from that era.(review here)

All in all, it’s been a varied collection of books in January. Let’s see what February brings.