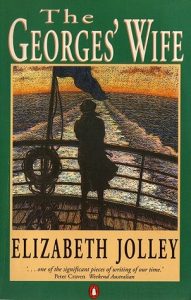 And now it’s autumn – here downunder anyhow, though not, I realise for our lovely Northern Hemisphere readers who are moving into Spring and then Summer! Lucky you! Still, autumn is a glorious season, and winter is good for cuddling up with a book so it’s all good.

March is a really busy month for award announcements, so because of this, I’ll be devoting the bulk of this round-up to those, referencing some of the winning or nominated books that were reviewed this month.

March was a stellar (not to mention Stella!) month for stats, with 64 reviews being posted in the literary and classics category – a significant increase on last March’s figure. Here are some highlights:

That classic was Elizabeth Jolley’s The George’s wife, reviewed by Bill (The Australian Legend). I say borderline, because it was published just 26 years ago. My rule of thumb for classics is around 25 to 30 years depending on how I’m feeling on the day – oh, and on what the reviewer decides to classify their review as. That too!

Anyhow, The George’s wife is part of Jolley’s Vera trilogy. It’s about Vera’s life and relationship with Mr George, and her thoughts about her family, and her past relationships. Best, though, is the writing of this “lover of words”. As Bill says:

This is astonishing writing that captures exactly the quality of remembering incidents in detail but in an order that conforms only to some inner logic of its own.

If you haven’t read Jolley, and you like Australian women’s literary fiction, do yourself a favour, and pick up one of her books.

March is always a BIG month for awards news – with announcements of winners, shortlists and longlists. I’ll discuss them in that order. There are some overlap in these lis

As always, I’ll just share the winning women writers, and there were only a few in this year’s winners’ list:

Two of these have been reviewed for the challenge, albeit not this month, but Marcia Langton’s Welcome to country hasn’t been reviewed at all. Anyone interested in helping us out?

The Stella Prize shortlist was announced, as is traditional, on International Women’s Day. It comprised:

All have been reviewed for the challenge, and, in fact, all but four were reviewed in March. So, where to start? Perhaps with a reviewer who hasn’t featured here for a while, Bree of 1girl2manybooks. She read Enza Gandolfo’s The bridge in her quest to read as many of the Stella shortlisted books as she could. (She wasn’t the only one to try to do this, by the way. It’s wonderful to see so many bloggers engaging with this women writers’ prize.) Anyhow, Bree found this historical fiction about the West Gate Bridge disaster powerful:

I found it a very draining read, even though I think it was incredibly well written and told a very good story that I became very involved in.

Another of our regular reviewers, Kim Forreseter (Reading Matters) read Vicki Laveau-Harvie’s Finch Memoir prize winner The erratics, describing it as compulsive reading. It’s about a dysfunctional family relationship of a very specific type. She said that

underpinning the narrative is a quiet strength and an almost ruthless quest to sort things out even if it means revisiting the horrors of the past. The Erratics is a brave and sometimes harrowing book, one that deserves a wide audience, but it’s also a testament to family love and the ties that bind.

Literary fiction book of the year: (5 of the 8, by women)

All have been reviewed for the challenge, but only one, Melissa Lucashenko’s Too much lip, this month. Both Angharad (Tinted Edges) and I reviewed it, and we both appreciated the honesty with which Lucashenko writes about a contemporary Indigenous Australian family and its travails in an unsympathetic world. Angharad concluded her review with:

Whichever way you look at it, this book is definitely a reality check. If you’re looking for an Aussie family drama about the kind of family that doesn’t get written about so often, this is a great book to try.

The Matt Richell award for new writer of the year (5 of 8 writers, by women)

Again, all have been reviewed for the Challenge, including two this month. One of these is Heather Morris’ The tattooist of Auschwitz, and it was reviewed by a reviewer who hasn’t appeared in my posts here before, Sanch (Sanch Writes). Sanch doesn’t rave about the book but liked it, finding it “intriguing … gruesome in some ways, yet endearing in others.” This book has garnered some very mixed opinions, but has also received some significant accolades, including this longlisting.

This is awarded by the Association for the Study of Australian Literature, and the longlist is (8 of the 12, by women):

Of the eight books, four – those by Pam Brown, Keri Glastonbury, Alison Whittaker, and Laura Elizabeth Woollett – have not been reviewed for the challenge, though other books by Whittaker and Woollett have been. And, only one of the remaining four was reviewed in March, Jamie Marina Lau’s Pink Mountain on Locust Island. Kate (booksaremyfavouriteandbest) called it a challenging book, recognising that it’s not in a style that suits her, but she wrote that:

I understand why readers are excited by Lau – her writing is expressive and commanding, with bizarre descriptions that have you re-reading and imagining…

It would be lovely, however, to see those four books not yet reviewed appear on my list in the near future!

Meanwhile, I hope next month won’t be so awards-heavy, so we can talk about other things.