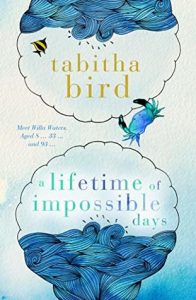 And so we reach the middle of another year at the challenge, and things are progressing well here in Literary and Classics land, tracking, I’d say, pretty much around last year’s rate. June is a less dramatic month, awards-wise, but we did have a couple of short list announcements. In July though, I’ll report on the Miles Franklin shortlist!

June was quite a bumper month for the challenge, with 76 reviews and interviews being posted for 50 books …  Here are some highlights:

The three classics posted this month are quite an eclectic bunch: Mrs Aeneas Gunn’s 1908 outback memoir We of the Never Never, PL Travers’ 1934 children’s classic Mary Poppins, and author Ruth Park’s 1992 A fence around the cuckoo, the first book in her two-volume autobiography.

The earliest of the three is Mrs Aeneas (Jeanie) Gunn’s We of the never never, about her life on a remote cattle station in the Northern Territory. Brenda, reviewing it on GoodReads, calls it “an important historical book”. This was her second read of the book, which she says,

paint[s] vivid pictures of the isolation, the struggles and problems day to day activities were for the settlers, the treatment of the Aboriginals and the obvious but accepted (back then) racism that was all around.

PL Travers’ Mary Poppins needs, I’m sure, no introduction. It was reviewed by Ashleigh Meikle (The Book Muse) who compares the book with the film, then concludes that the book

may not be as Australian as Seven Little Australians, or the Magic Pudding, but it still falls under Australian writers and literature. Mary Poppins might be properly English, but as we know, she is also practically perfect in every way, and her creator is very much Australian.

It was Brenda, again, who reviewed Ruth Park’s A fence around the cuckoo. Hers is the first review of this book posted for the challenge, which makes it doubly special, as Park is an important Australian writer whose autobiography makes a significant addition to our database. A fence around the cuckoo chronicles her growing up in New Zealand, including her experience of the Depression, and her early years in Australia before her marriage to author D’Arcy Niland. Brenda thoroughly enjoyed the book (as I remember did I when I read it way back when.) She notes how Park’s experiences informed her later writing, and says that

Her storytelling is at times amusing, other times grim, but always a joy to read. …Although non fiction, Ruth Park’s autobiography was an entertaining and absorbing read which I highly recommend.

It’s a while I think since I’ve spotlighted publishers, so this month I thought I’d briefly draw your attention to two venerable university presses, UQP (from Queensland) and UWA (from Western Australia). At least 6 reviews this month were for books published by these presses, including:

UQP was established in 1948 and has published many literary award-winners over the years. It has also, since the 1990s, given particular emphasis to indigenous writing (and annually publishes the winner of the David Unaipon Award).

Elizabeth Kuiper’s debut novel Little stones is one of the most recent releases from this publisher, and was reviewed in June by one of our stalwarts, Cass Moriarty. She describes it as “a coming of age story that has such a strong sense of authenticity that it feels more memoir than novel.” It is set in Zimbabwe during Robert Mugabe’s reign, and politics is a significant aspect of the novel. Overall though, and commenting I assume on its youthful protagonist, Moriarty says that:

I didn’t read this book as a YA novel, although it certainly has that feel about it. Hannah is negotiating friendships, family circumstances, education, her identity, her ambitions and dreams, but the complex content makes it equally a book for adults.

UWA Publishing is even older, having been established in 1935. Josephine Wilson’s Extinctions, which was reviewed this month, won the Miles Franklin award a couple of years ago. Our reviewer this month was Jonathan Shaw who read it with his reading group. It’s a book that has been loved by many, but Jonathan wasn’t enamoured. He does, however, write entertainingly of his meeting, and reports some of the more positive responses:

The architects and modernist design aficionados among us enjoyed the presence of those elements, including the illustrations scattered throughout. No one could tell me what these photos added, except that they pleasantly broke up the pages of text. Clearly, though, the book had stuck a chord in some, as a number of members spoke in a heartfelt way of how adoption, old-people’s homes, work-family balance had figured in their lives.

Shortlists for just two awards were announced this month:

Shortlists for the Western Australian Premiers Literary Awards were announced for four categories, with the category most appropriate to this part of the challenge being:

Emerging Writer Shortlist (3 of 5, by women)

Renee Pettitt-Schipp’s The sky runs right through us is yet to be reviewed for the challenge. We’d love to see a review for it if anyone is willing!

Four of the six shortlisted books are by women.

All have been reviewed for the challenge, though none this month. However, a couple have been reviewed this year, including Sofija Stefanovic’s Miss Ex-Yugoslavia which was added to our list by calzean (GoodReads) in April. It seems though that she doesn’t agree with the judges’ accolades:

The author is quite self critical, has some quirky ways of looking at her life and her childhood reminisces are painfully real. This is not a great book but does give a new and fresh way of looking at the confusion of the Balkans.