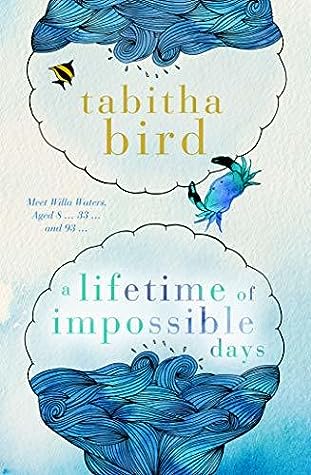 Hello again, half the year is over and it’s been a good one so far. We had quite a few new books reviewed this month, many thanks to new reviewer Dark Matter Zine for linking her reviews.

First up is a book that crosses genres and I’m sure will be in many round-ups A Lifetime of Impossible Days by Tabitha Bird, this is a debut novel and I absolutely loved this book as did Dark Matter Zine, Amanda @ Mrs B’s Book Reviews, Brenda, Theresa Smith Writes. Shelleyrae @ Book’d Out &  Claire holderness

I thought this was “A wonderfully brave and powerful story that I can’t recommend enough.”  I definitely recommend you check out these reviews and then grab a copy of this wonderful book.

Next up we have Cassandra by Kathryn Gossow, this is on my TBR list and Clare Rhoden has already read it and says “This book is an addictive read – once you start, you really have to keep going.” and “A page-turning, moving exploration of potential, imagination, and how to deal with everything real life throws at you.”

Next we have book 3 in The Light Blade series Allegiance Sworn by Kylie Griffin which was reviewed by Eleni who says “Another great instalment in The Light Blade series. In fact, I actually think I enjoyed this one the best as we see inside of the Na’Reish society. We learn more about this world and there’s surprises in store as our hero Arek finds out. This is a well written story that takes you on a deeper journey into this fantasy world. It’s a brutal world but we’ve seen before that love can still exist despite this.”

I took the opportunity to look at the previous books in the series and Eleni read Vengence Born #1 and gave it 5 stars, she says “Absolutely loved it. I savoured reading this making myself slow down. Well except the last quarter which I read quickly. Prejudice is alive and well in this book, and we see the characters learning trust one another, and the other society. Wonderful worldbuilding. And what a fab cover. Probably one of my favourites and now having read the book, it is even more so because that’s Annika. Well done, Ms Griffin. A fabulous tale with love, adventure, and with a set up for more in book 2. Can’t wait to get my teeth into that one.”  Book #2 Alliance Forged  had Eleni saying “Fabulous. Totally enjoyed this fantasy tale of two races trying to live in harmony together.  A complex story full of emotion, including fear, love, trust and betrayal. It is woven expertly by the author and you can feel the desperation of the characters for this alliance to work.

This definitely sounds like a great series to pick up.

“A cleverly constructed novel where the experience of an alien life form is interwoven with the story of George Hills, survivor of the Admella, who in Rawson’s fictional account has come across the alien while on the wreck. The alien sections are so beautifully written that I didn’t want them to end, while the human story provides both a framework and a relief from what could be quite unrelenting weirdness. These human sections give voice to every question a human might have about the appearance of something so strange in our world. The alien sections play counterpoint, responding to every question with a simple, insistent, first-person experience. It’s a weird novel but also an accessible novel, a very Australian blend of science fiction with a magic realist feel to it. The term speculative fiction fits perfectly, much better than the old divisions of science fiction and fantasy.”

Ashleigh from The Book Muse is still going with Emily Rhoda’s series Deltora Quest and in June she reviewed The Shifting Sands #4 “This was another great instalment in the series, and each book moves the characters and journey forward. They are quick reads, perfect for ages nine and up, and are engaging and fun to read.” And Dread Mountain #5 “Yet another great book in the series – filled with adventure and friendship, it shows kids that working together is a good thing, and this has been a theme I have found throughout the series and that I hope will continue” and “As each book builds on the other, there are hints dropped here and there about what is to come, but at the same time, many surprises that keep people engaged and reading on through each book, which shows just how popular this series is.”

Lastly we have Darkness Hunts by Keri Arthur, this is book 4 in the Dark Angels series. Evie from Dark Matter Zine says “The Dark Angels series is recommended for established fans of Arthur’s other series, but would also make a good entry-level series for new readers. There is enough context provided for the intertextual references involving characters from Riley Jenson for them to make sense, even if some of the significance might be lost. It is also possible to start reading the series at Darkness Hunts, as it recaps the major plot developments of the series so far. As with all Arthur’s urban fantasy novels though, Darkness Hunts is only suitable for an adult audience. “

I look forward to seeing what you read in July. Don’t forget to link your reviews to AWW here

Until next time happy reading.