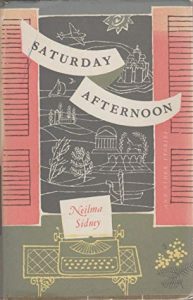 September saw the announcement of one of the last major shortlists for the year, the Queensland Literary Awards, so look at for those at the end of this post.

Another decent month for reviews, with 42 being posted. Here are some highlights:

Two classics classics were posted this month – Tasma’s 1888-published Uncle Piper of Piper’s Hill and a new one to the challenge, Neilma Sidney’s 1959-published book of short stories, Saturday afternoon.

Neilma Sidney has quite a history, which reviewer Jennifer Cameron-Smith touches on in her review. Neilma Sidney (1922-2015) was a pseudonym for Neilma Gantner, but Gantner was actually born a Myer (of the Myer retail store fame). Her brother, Ken Myer, has a special place in my heart because, as a board member of the National Library of Australia, he took a special and unusual (for the times) interest in the Films area where I worked. But, enough of the man, Neilma Sidney was amazing herself. Wikipedia says that she co-founded The Gantner Myer Collection of Australian Aboriginal Art, and founded the wonderful Four Winds Cultural Festival (in Bermagui, NSW). Also, as Jennifer Cameron-Smith discovered, Writers Victoria manages, with the Myer Foundation, the Neilma Sidney Literary Travel Fund, which was named in her memory. How many of you have heard of this woman?

There’s a restlessness in these stories, as well as a sense of place. While I found something in each of these stories, it was ‘Saturday Afternoon’ which will stay with me. / Well worth reading if you enjoy short stories and can locate a copy.

Tasma, on the other hand, has appeared here before, but Uncle Piper of Piper’s Hill is worth mentioning again. Indeed, Bill devoted two posts to the book, an introductory post, followed by a more specific one. Bill provides some good background to author Tasma (aka Jessie Couvreur), makes some comments about where he sees her fitting into wider literary culture, and describes the characters and plot. He says this:

The plot is simple enough but what Tasma does, brilliantly and in detail, is describe the fluctuations in mood as the various young people form and reform alliances.

Having read the book, I agree.

It’s some time since I’ve highlighted the most reviewed books for the month, so that’s this month’s special corner!

Melanie Myers’ Meet me at Lennon’s is a debut novel which won the Glendower Award for an Emerging Author (for an unpublished manuscript) in the 2018 Queensland Literary Awards. Author Cass Moriarty read the manuscript for the awards, and has now posted her review of the published novel. It’s historical fiction, with some crime, or, as Cass says, paraphrasing Churchill, it’s “a riddle, wrapped in a mystery inside an enigma”. Theresa Smith (Theresa Smith Writes), who also enjoyed it, describes it as a “dual narrative” but, a differently told one:

it differs to most that I have read in the past. The historical narrative is presented more in the fashion of short stories about women living in Brisbane and their experiences with soldiers.

She found the narrative was intelligent “and not bogged down with genre conventions”. She also liked the way the contemporary narrative was handled. Her only quibble concerns the large number of characters to keep track of! Author Kali Napier greatly enjoyed it, calling it “an immensely enjoyable read and evocative of life for women in wartime Brisbane.”

Jennifer Cameron-Smith loved Favel Parrett’s third novel, There was still love, saying it’s “a novel to read slowly, to consider and to revisit”, while Brona (Brona’s Books), having loved Past the shallows, was a little underwhelmed, calling it “a lovely dance across the surface of love, memory and family, but I prefer books that dive into the depths.” Ashleigh Meikle (The Book Muse) was more in Jennifer’s camp, describing it as

accessible to all and each reader will have a different understanding, depending on how old they are and when they read it, as well as their own experiences. A nicely written book that reflects family life for what it can be.

Last – but not, of course, least – of this month’s most reviewed books is Lucy Treloar’s Wolfe Island, which is set in Chesapeake Bay in the USA. Our reviewers were Amanda (Mrs B’s Book Reviews), who describes it as “a dramatic, atmospheric and observant study of humanity in the face of climate disaster”; Brenda (GoodReads), who called it “lyrical” and highly recommends it; and Jennifer Cameron-Smith (GoodReads) who said that she “finished this novel convinced that it will be one of my favourite novels of 2019”. Among other things, she said, it reflects “on the beauty of the natural environment, and what we all stand to lose”.

These three, despite the odd reservation, sound like a wonderful bunch of books, well worth considering for Christmas gifts and holiday reading, n’est-ce pas? (It’s not too early to start planning!)

One main awards announcement this month  …

Like many state awards, the Queensland Literary Awards involve quite a swag of categories, but I’ll just report on the main ones of interest here:

The University of Queensland Fiction Book Award  (3 of the 5, by women)

University of Southern Queensland Steele Rudd Award for a Short Story Collection (1 of the 3. by a woman)

All of these have been reviewed for the challenge, but only one this month, Debra Adelaide’s Zebra: and other stories. Reviewer Veronica (The Burgeoning Bookshelf) explains that the book comprises 13 short stories and a novella, the titular “Zebra”. Although she found “the stories wanting”, she praises the writing:

Adelaide’s writing is lyrical and perceptive, exploring human foibles in all its forms. She proves she can master any writing style; first person, second person and third person perspectives are all executed with perfection.

Perhaps it’s a matter of what you look for in short stories?