History Memoir and Biography Round Up: September 2019 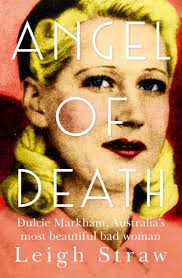 September has been a relatively lean month in the History, Memoir and Biography genre  with eight books read by nine reviewers. Two reviewers read Leigh Straw’s  Angel of Death: Dulcie Markham Australia’s Most Beautiful Bad Woman (2019). Dulcie Markham was embedded in Sydney’s crime world, and the men around her had a habit of dying. Straw’s book contextualizes Dulcie’s life, giving insights into the nature of crime empires and the women within them, the nature of prostitution, and more general social life between the 1920s-50s.  However, as Jennifer Cameron-Smith noted in her review:

Ms Straw writes of a setting which I recognise from other true crime books, and of characters whose names have become familiar. But I gained no real sense of the woman behind the façade. Dulcie Markham rarely spoke to reporters and left no personal records. (Read review here)

Janine Rizzetti also commented on the dearth of first-hand material:

Dulcie Markham was certainly talked and written about, and her police file was bulky, but she herself rarely spoke to reporters and there is virtually nothing written by Markham herself. As a result, Dulcie’s story was completely embedded within the stories of other people. At times I felt as if the author let herself be caught up too much with these other minor personalities, who had crime histories just as sordid as Dulcie’s. …there’s a chatty, familiar chumminess and a bit of a chortle that comes through when the excesses of the underworld are being written. It makes me a little uncomfortable. (Read review here) We move from a book about notorious women to one about notable women, in Susanna De Vries’ book Rebel Women Who Changed Australia (2019). An updated and condensed (at 592 pages!) edition of the earlier Complete Book of Great Australian Women, this book celebrates women who “broke the mould, cracked the ceilings, and shaped the nation in fields of medicine, law, the arts and politics.” In her review, Ashleigh Meikle wrote:

Books like this allow hidden history to be revealed, and it covers white women, Indigenous women, rich women, and poor women….What I’m enjoying about books like this is it shows women as more than what history books represent them as at times, and identify who they are and what they did, what made them exceptional for their time. It allows for readers of all ages to see what women could do, not only what they were expected to do, proving that these unstoppable rebel women refused to let anything, and anyone stop them reaching their goals. (Read review here) The borders between historical fiction and fictionalized history can be blurry, and I have hesitated about including Cass Moriarty’s review of The Hollow Bones (2019). It is a  reimagined historical fiction rendering of the real life of Ernst Schafer, an ambitious German zoologist, hunter and collector who moves through the ranks of the Third Reich while following his dreams of scientific endeavour. What swayed me to include it in this category was Cass’ mention of the afterword, which draws the book back to real life and historical fact:

at the conclusion of the book, Kaminsky includes a ‘where are they now’ section of notes on the main (real) historical characters of the book, and this is a sobering end, as we read of whether or not the people in this novel were ever tried or convicted, of what they may have been found guilty, and what – if anything – was their punishment.(Read review here) Just as the borders between fiction and imagined history are blurry, so too are the borders between memoir and journalism. Triggered by her own experience with endometriosis Gabrielle Jackson’s Pain and Prejudice (2019) examines how women’s pain and suffering is dismissed as “women’s illnesses” and the bias towards male-centred medical research . In her review Cass Moriarty wrote:

In a seamless blend of memoir and investigative journalism, Jackson confronts this issue from the historical to the modern, with a rigorous and intellectual interrogation of medical culture and practice, peppered with plenty of real-life anecdotes and examples from her own experience and from women she has met in the course of her work. (Review here)

It’s good to see that some ‘older’ books continue to be read, along with the new releases.

Jenny Mustey listened to Kitty Flanagan’s Bridge burning and other hobbies,  and Eleni Konstantine read Anita Heiss’ book Am I Black Enough for You, which has garnered 13 reviews since 2012. Jennifer Cameron-Smith read Stephanie Wood’s recent book Fake (review here) and an older book recently re-issued in paperback You Daughters of Freedom (review here).