History Memoir and Biography Round Up: October 2019 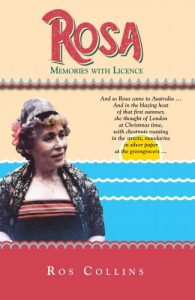 October brought us sixteen reviews of fifteen books in the History, Memoir and Biography, double our tally for September. Memoir and biography continue to dominate, but it was good to see the presence of history amongst our reads this month too.

The trend towards genre-bending has made the boundaries of the memoir fuzzier than they may have been in the past. Two memoirs reviewed this month leave me scratching my head about whether they fit in this category or not.

Even the ambiguous title of Ros Collin’s memoir  Rosa -Memories with Licence  reflects the author’s own questioning of her work as  “Memoir with a little fiction, or fiction with a little history?” In her review, Theresa Smith, who admits to a “difficult relationship” with memoirs, writes: Rather than offer a chronological history, [Collins] has fashioned the book in a more eclectic style, like a series of vignettes, each chapter themed to a certain agenda….Rather than a life story, or even a journey of sorts, this book is more of an introspection on her personal Jewish history….By the time I reached the end, I realised that I hadn’t given much thought to what might be true and what might be fiction. I had been too busy just enjoying it all, which I would wager, was Ros’s intent. (review here)

Blue in the Red House, by Sarah Madden is even more perplexing, combining magic realism and memoir. In her review, Shelley – Underground Writers notes: Equal parts absurd and whimsical, the magical realism/memoir hybrid is an adventure unlike anything else I have read….Though never mentioned outright in the story, Blue in the Red House is an account of Madden’s own experiences with being diagnosed with autism at age 34. The way in which this story is written gives the reader an idea of how autism can affect sensory perceptions, and the immersive language creates a world not unlike falling down the rabbit hole. (review here)

Two books reviewed this month involved the author uncovering a traumatic family history, of which they had been previously unaware. Janine at Resident Judge finally read Follow the Rabbit Proof Fence, a book published in 1996 which has been made into a film. It is the story of Molly (14), Daisy (11) and Grace (8) who were forcibly removed from their families and taken to Moore River Native Settlement in 1931.She was surprised that the book contained as much history as it did, and wondered how the book compared with the film:

I imagined that this book would be more emotional and angry than it is. The front-loading of history at the start of the story does make it somewhat abstract, and there is a flatness in the telling that I didn’t expect. I’m sure that on the screen, the landscape would be stark and featureless, but in the book more emphasis is placed on how Molly ‘reads’ the country, rather than on what it lacks. I look at some of the blurbs for later editions and the movie, which highlight ‘adventure’ and ‘courage’. These things are here in the book, but so too is unspoken love and knowledge for country, a quiet and stubborn determination, and a slow-burning injustice. (review here)

A more recent publication is Juliet Rieden’s The Writing on the Wall, which takes us back to the Holocaust as the author uncovers her father’s tragic and largely unspoken history. It was reviewed during October by Jennifer Cameron-Smith (review here) and by Amanda@Mrs B’s Book Reviews. Amanda writes: Juliet Rieden, the author of The Writing on the Wall, is a veteran journalist with over thirty years of experience in the field…. However, nothing could prepare her for the emotional undertaking of The Writing on the Wall, which is a memoir exposing the story behind her father’s roots and the huge loss of his family during the Holocaust….Interspersed between Juliet Rieden’s investigations into her father’s past are letters, family trees, magazine extracts, inscriptions, documentary notes, statements, reports and testimonies….As always with memoirs of this nature, it is hard to say that The Writing on the Wall was enjoyable. I will say that Juliet Rieden’s account is a meaningful and essential undertaking, that has being lovingly compiled by the author as a way of better understanding her father’s tragic lineage. (review here) In The Girls, there is family grief after the sudden and untimely death of two sisters in a car accident. This exploration of pain and grief is refracted through the perspectives of three different family members, the author Chloe Higgins, and her parents. In her review, Amanda at Mrs B’s Book Reviews observes:

Grief is such a universal fact of life, but how we express and deal with it is very personalised. The Girls is an exploration of the individualised act of grief, in the face of a catastrophic event. The Girls utterly consumed me….The feel of this book is almost like a stream of consciousness, it is a constant flow of thoughts, ideas, expressions and recollections. (review here)

Now that Jennifer Cameron-Smith has read The Worst Woman in Sydney, our reviews have covered each of Leigh Straw’s three connected biographies of women who were embroiled, in different ways, in the underworld in twentieth-century Sydney and Melbourne. Kathleen Mary Josephine Leigh, more notoriously known as Kate Leigh rose to prominence as an illegal trader of alcohol and cocaine in Surry Hills, Sydney. Jennifer writes:

Kate Leigh was one of the leading figures in the notorious Sydney razor gang wars: she had more than 100 criminal convictions to her name. She was also known for her acts of generosity to members of her local community during the Depression….While I found the book interesting, I’m not sure that I found Kate Leigh particularly admirable. Still, in a world dominated by men she certainly made her mark. (review here) A far less salacious life was led by Mary Cunningham (nee Twynam), born in Goulburn in 1869, who twenty years later married the pastoralist Andrew Cunningham and settled on ‘Tuggranong’ in the Tuggeranong district of New South Wales. In reviewing Jennifer Horsfield’s Mary Cunningham: An Australian Life, Jennifer Cameron-Smith writes that she There is a particular pleasure in reading a history about a place that is familiar to us.Our reviewer Jennifer Cameron-Smith is obviously enjoying reading local history at the moment, because she has read three books this month that are associated with the Canberra/Snowy River area.

Voices Beyond the Suburbs, also written by Jennifer Horsfield, returns to the Tuggeranong Valley that she wrote about in Mary Cunningham, but this time she examines the soldier settlements that were established there after World War I. Jennifer writes that she “found this an interesting book about a part of Canberra’s history of which I knew very little” (review here)

Jennifer has also read Helen Taylor and Judi Hearn’s Life on the Currango High Plains and Beyond, which explores life in the Snowy Mountain high country before the establishment of the Kosciuszko National Park and the Snowy Mountain Scheme. She writes

….These vignettes of the past are accompanied by photographs (of people, places and paintings), and a few poems. This slender book is a tribute to those who lived and worked in the area and has a permanent home on my bookshelf.(review here)

Reviews continue to arrive for books that have been dealt with in previous Round Ups. Jennifer Cameron-Smith read Tanya Bretherton’s The Suicide Bride, and Denise Newton reviewed Esther by Jessica North. N@ncy read Gabbie Stroud’s Teacher, and Janine Rizzetti read Her Mother’s Daughter, the memoir by Nadia Wheatley.  Cass Moriarty read Jessica White’s Hearing Maud and Kate@Booksaremyfavouriteandbest reviewed Stephanie Wood’s Fake. If you’ve already read these books, why not check out what these readers thought of them- and if you haven’t read them – well, they’re still attracting readers!